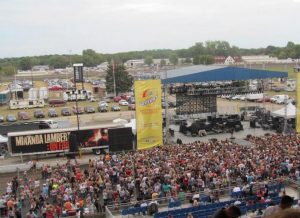 This co-headlining act combines two artists who have six Grammy awards to their credit, in addition to countless other awards and accomplishments. This year, fairgoers will be treated to the best of 80’s and 90’s rock when Pat Benatar, Neil Giraldo and Melissa Etheridge take the stage in Springfield.

Pat Benatar is a four-time Grammy award winning singer/songwriter who shot to fame in the 1980’s and has been touring for more than 35-years. Known as a rule-breaker and a trail-blazer, Benatar is revered as one of the most beloved female rock icons of all time.

Benatar was the first female solo artist to have a music video played on MTV. The video for her song ‘You Better Run’ was the second video ever played on the new music video cable channel, and also was the first video to feature guitarists. Benatar is best known for hit songs such as, “Love is a Battlefield,” “Hit Me with Your Best Shot,” “Heartbreaker,” “We Belong,” and “Shadows of the Night.”

To this day, Benatar and guitarist husband Neil Giraldo remain a rock’n’roll powerhouse, selling out concerts and wowing audiences.

Melissa Etheridge is a well-known singer/songwriter who came to fame in the late 80’s. Etheridge, known for her confessional lyrics and raspy vocals, has been a prominent force in the music industry for nearly 30 years with 12 albums, two Grammy awards, 17 Grammy nominations, an Academy Award and a star on the Hollywood Walk of Fame.

Ticket prices for each of the shows at the 2016 Illinois State Fair are listed below:

An on-sale date for the above mentioned acts has not been set at this time.

More details regarding ticket sales, special events, and additional grandstand acts will be released in the coming weeks and months. Dates for the 2016 Illinois State Fair are Aug. 12-21.