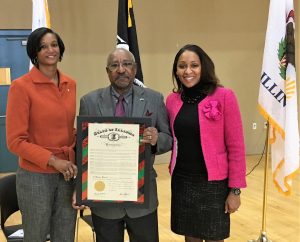 Ret. Col. Eugene Scott, former publisher of the Chicago Daily Defender newspaper and past president of the Chicago Defender Charities, served two tours in Vietnam. He was honored by the Illinois Department of Veterans’ Affairs on Feb. 8. He is joined by IDVA Chief of Staff Renysha Brown (left) and IDVA Director Erica Jeffries. (Photo courtesy of IDVA)

“We are here today to salute and honor all African-American Veterans. Since our nation’s war for independence, these brave veterans have served honorably in the United States Military,” said IDVA Director Erica Jeffries.  African American soldiers, sailors, airmen, coast guardsmen and Marines have participated in the Spanish American War, Philippine Insurrection, Mexican Expedition, WWI, WWII, the Korean War, Vietnam War, Persian Gulf War and our current war on terrorism.  “They have served in peacetime and times of war.   We thank them for their service to our country,” added Director Jeffries.

Col. Eugene Scott and Beverly Scott were the keynote speaker at the ceremony. Scott is the former publisher of the Chicago Daily Defender newspaper and past president of the Chicago Defender Charities.

He commanded tank forces and was the staff officer (G3) for the 8th Infantry Division Combat Ready Forces.  A decorated combat veteran, he served two tours of duty in Vietnam.  His awards include the legion of Merit, two Bronze Stars and the Combat Infantryman Badge.

Beverly Scott is a writer and executive director of Friends of the Victory Monument.  She serves as storyteller for the University of West Virginia African American Media Department’s Google Expedition Project.

This project features the story of the African American experience including the Victory Monument Memorial, the American Legion Giles Post #87 and the Illinois National Guard’s “Fighting 8th” who were federalized as the 370th INF.

Major General Richard J. Hayes Jr., Adjutant General of the Illinois National Guard offered remarks as well in the ceremony. Hayes is the 39th Adjutant General of the state of Illinois. He serves as a member of the governor’s cabinet as the director of the Illinois Department of Military Affairs and is the governor’s principal advisor on military matters.

Hayes is the senior officer in the chain-of-command for both the Illinois Army and Air National Guard.