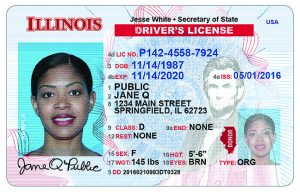 Secretary of State Jesse White, announced Illinois will upgrade its security standards for issuing driver’s licenses (pictured) and ID cards by the end of July. (Photo courtesy of the Secretary of State)

The state of Illinois is changing the process of getting driver’s licenses renewed in order to improve national security and fight against identity theft, according to the Secretary of State’s office.

On May 17, Secretary of State Jesse White announced Illinois will upgrade its security standards for issuing driver’s licenses and ID cards by the end of July. According to his press release, the changes are being implemented to bring Illinois one step closer to meeting the federal security requirements set forth by the REAL ID Act.

“These changes are necessary for Illinois to be REAL ID compliant,” White said in a press release. “In addition, the changes further enhance our efforts to protect Illinoisans from fraud and identity theft.”

Since most motor-vehicle bureaus do not have the technology necessary to make these improved IDs, Illinois residents will no longer be issued a new permanent driver’s license or ID card immediately after finishing the application process, according to the press release issued by the Secretary of State’s office.

When Illinois residents renew their driver’s licenses, they will be given a temporary secure paper driver’s license for driving and identification purposes until they receive their real ID card.

Illinois residents are still allowed to keep their old IDs but a hole will be punched in the card to avoid fraudulent use of the ID.

These new temporary IDs are valid for up to 45 days and include the same basic information and photograph that normally appear on driver’s licenses and State IDs, according to the press release.

The Secretary of State’s office explained that the temporary IDs allow time for the applicant’s information to be sent to a centralized, secure facility in Illinois where it will go through multiple fraud checks and then a new secure ID will be printed. These secure IDs are then mailed to the applicant’s address within 15 business days.

The Secretary of State’s office advises Illinoisans to make sure that the address on file for them is correct so that their new ID cards can be sent to them. Illinois residents can check their listed address online at www.cyberdriveillinois.com.

If an applicant does not receive a new permanent ID within 15 business days they can check the status of their ID online at the website listed or call (217) 782-7044.

The REAL ID Act was enacted on May 11, 2005 after being passed through Congress and is now a federal mandate of the Department of Homeland Security.

A public FAQ released by the Department of Homeland Security said that the bill was enacted in response to the 9/11 Commission’s recommendation that the federal government should set universal security standards for driver’s licenses and state ID cards.

The REAL ID Act seeks to create a national identification system where all states issue driver’s licenses and ID cards that undergo multiple preliminary fraud checks and adhere to federal security standards. This national ID system would also allow for data collected on drivers to be shared among governments nationwide in the hopes of improving national security.

Eleven years later, this national identification system is still not a reality as many states have chosen to implement the changes gradually and other states have refused to comply with all of REAL ID’s requirements.

According to the Center for Immigration Studies or CIS, there are only five states that are completely REAL ID compliant thus far. CIS said 41 states have promised DHS that they are working toward becoming partially or fully REAL ID compliant.

But some states, such as Montana and Oklahoma, have passed laws preventing motor-vehicle bureaus from complying with REAL ID standards, according to CIS.

Illinois is one of the majority of states that have been working toward becoming REAL ID compliant and the new process for renewing driver’s licenses and ID cards is a crucial step.