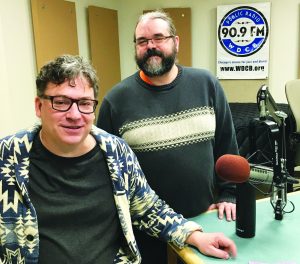 Saxophonist John Fournier (left) with WDCB morning show host Paul Abella at the Glen Ellyn studio in February. The station is known for its strong support of the Chicago area jazz scene. (Photo courtesy of WDCB)

Reports last month of Peoria-area public radio aficionados rallying to save their local station amid fiscal restraints could prompt questions about the long-term viability of the format.

Unlike their traditional commercial counterparts, public radio stations have long subsisted on operating through a range of income sources, including listener contributions, government funding and the licensee, such as a university or college.

Concerns last month were raised about the future of WCBU-FM, Peoria’s public radio station, as reports surfaced of Bradley University pooling resources with Illinois State University, the licensee off WGLT-FM in Normal.

Details of the potential arrangement, which have not been finalized, have been discussed as a possible cost savings arrangement to keep WCBU operating.

Chronicle Media reached out to managers of public radio stations across the state to get a pulse on the vitality of their respective operations. Amid an ever-changing media landscape, the managers of these stations and groups said they were upbeat about the futures of the specific operations.

As noted above, WGLT-FM could partner with WCBU-FM in the future to keep the latter station operating.

General Manager R.C. McBride said, “WGLT’s future as a public service is bright, but never to be taken for granted.” 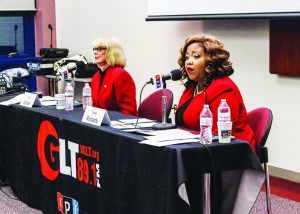 One of the community services WGLT provides is sponsoring candidate debates like this one held October 2018 between Republican McLean County Clerk Kathy Michael (left) and her Democratic challenger Nikita Richards. (Photo courtesy of WGLT)

McBride credited support from the community and ISU with the station’s continued viability, even as outside challenging headwinds have impacted traditional radio in all its forms.

“We’ve finished in the black three consecutive fiscal years, and as a result we’ve been able to invest more in programming, staff and equipment needed to better serve the public,” he said.

In terms of the future, McBride said, “Support from grants, our institutions and successful station fundraising efforts are more crucial than ever.”

Last month, Eric Jome, director of media relations with ISU, said WGLT’s potential partnership with WCBU would hinge on an agreement between the two universities.

“Nothing has been finalized in regards to details or a time frame,” Jome told the Peoria County Chronicle.

Licensed and owned by the College of DuPage in the Chicago suburb of Glen Ellyn, WDCB-FM serves up a jazz format, which gives the station a distinct advantage, General Manager Dan Bindert said.

“We’re doing quite well,” Bindert said. “Our situation is a little different than some public radio news-talk stations in that we are primarily a jazz music station, serving a city — Chicago — where jazz music is both important historically and thriving currently”

The station also serves another niche audience with old-time radio shows on Saturdays and airs traditional Celtic music and traditional American bluegrass folk on some weeknights.

Over the years, Bindert said WDCB has reaped the benefits of a loyal audience that sees the station’s value in the marketplace through its traditional terrestrial radio roots and, more recently, through its online streaming service.

“Our financial situation at WDCB is better now than it’s ever been in our 42-year history,” he said. “Our listener donation numbers hit an all-time high in the past year. In the last five years, we have drastically reduced the level to which the college subsidizes our operations.”

As with other public radio operations across Illinois, and elsewhere, Bindert said WDCB has operated conservatively and on a lean, fiscally prudent budget.

From his own vantage point, Bindert said he believes traditional radio, including the listener-supported public format, will enjoy a long future.

“There’s a lot of ‘sky is falling’ type stuff about radio audiences … especially from tech futurist types,” he said. “People have been predicting that broadcast radio was on its last legs since at least the late 90s — 20 years ago — but even if radio isn’t as dominant a media force as it once was, listenership for most stations is still strong.”

Northern Illinois University operates WNIJ-FM and WNIU-FM in the northcentral portion of the state. Together the stations operate under the moniker Northern Public Radio.

General Manager Staci Hoste said Northern Public Radio has evolved with the times by staying tuned to its listeners’ needs and wishes. This year, the station group is celebrating a milestone.

“In 2019, Northern Public Radio celebrates 65 years as the region’s primary source for NPR (National Public Radio) news and commercial-free classical music,” Hoste said. “Future plans include reinvestment in infrastructure and technology, along with expanded content initiatives, both locally and statewide.”

WSIE in Edwardsville has partnered with the National Blues Museum in St. Louis for live music performances and for programming such as The Blues Highway that airs Thursday evenings. (Photo courtesy of WSIE)

Amid the changing media landscape, Hoste credits Northern Illinois University for the stations’ successes. The university, she said, has been “deeply committed to the stations and the role we play in the community.”

“We continue to prioritize projects that localize and examine issues and engage listeners in the process of determining what the issues are that most affect them,” Hoste said.

WSIE-FM, owned by Southern Illinois University, primarily serves the Greater St. Louis market. Operating under the branding, “The Sound,” the station programs a format of jazz, blues and R&B, the roots music of the St. Louis region. 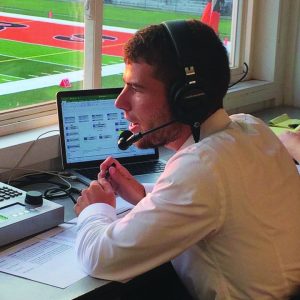 “We are the heritage jazz station in the St. Louis region,” General Manager Jason Church said. “Over the past three years, our listener audience has grown substantially, which is a great thing.”

Throughout its history, Church said WSIE has enjoyed a “faithful listener base” that includes support from the broader community and on-campus students.

“In operating a public radio station, the key thing to understand is the fact that there will always be a financial need, so the money that comes in is critical in assuring that stations like ours will be here for the enjoyment and education of generations to come,” Church said.