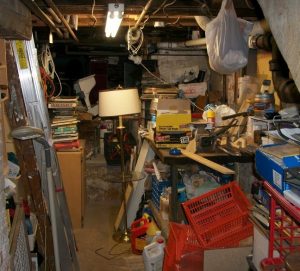 Downsizing aside, professional organizer Anna Glielmi said accumulated clutter, like no-longer-useful furniture and other items, is mostly about the inability or unwillingness to make decisions.

All but the most meticulous and disciplined of people have let their living space get out of hand. And most people will eventually find themselves moving to a smaller place as they get older. When that happens, hard choices must be made about what they take with them and what they leave behind.

Anna Glielmi, a professional organizer and owner/operator of Fresh Look Home in Glenview, is in the business of helping people get uncluttered and manage the process of downsizing and shedding personal property.

For an hour Aug. 22 at the River Forest Library, Glielmi was part therapist, part task master, and occasionally a comedian as she walked her audience through the realities of both issues.

They are issues that are apparently on many people’s minds. The library set up 24 chairs for Glielmi’s talk; more than 70 people showed up. Most were empty nesters and people looking to move.

Glielmi started focusing on the tsunami of empty-nest baby boomers preparing to retire and downsize.

With so many empty nesters shedding their belongings, the looming question is what are they going to do with all the stuff they accumulated.

Glielmi noted statistics compiled by the American Association of Retired People that indicate that 8,000 people a day are going to retire over the next 18 years.

“Where’s it all going to go,” Glielmi asked rhetorically. Probably not to your kids, she tells her audience.

“They don’t want it. Resign yourself to that being the case.”

She explained that while previous generations were the curators and guardians of prior generation’s keepsakes and heirlooms, millennials are very different from their grandparents.

Twenty-somethings living in a 900-square-foot apartment have no use for bulky furniture.

“Where is their life?” she asked, holding up her smartphone as titters of laughter scattered around the room.

“Millennials, their lives are in this phone.”

Glielmi said the mass of baby-boomer retirements has already impacted the market for antiques and household furniture.

“Estate, auction and consignment companies are brimming with inventory from boomers downsizing. It’s a buyer’s market, and will remain so for many years. “The market has been glutted with items that are similar.”

Glielmi suggested the challenge for downsizing baby boomers is both more emotional than physical.

“You’re dealing with a lifetime of sentimental items,” she said. “For many of us, our belongings are a part of our identity.”

They also are physical representations of people’s hopes and dreams.

She counsels that downsizes need to let the past be the past.

“Don’t worry about what resonated with you in the past,” she said, urging her audience to envision their future. “Be free of things that aren’t useful to you.”

“Get brutally honest about what you do and don’t need.”

Of course, everyone has those items that hold great meaning and can’t be let go of, downsizing or not.

Rather than stick them away in some box for years, Glielmi said, we should make a more public space for those things.

“Give it a place of honor in your home.” The rest needs to find an organized place in the household, or be jettisoned.

To help with the emotional challenges of downsizing and inheritance issues, Glielmi recommends “Who gets grandma’s Yellow Pie Plate” from the University of Minnesota.

Downsizing aside, Glielmi said accumulated clutter, like no-longer-useful furniture and other items, is mostly about the inability or unwillingness to make decisions.

There are two basic types of people, Glielmi said. Those who want totally clear spaces, and those who like to have stuff available to them where they can see it.

Glielmi said some clutter is not necessarily a bad thing. “Every surface doesn’t need to be clean,” she said. “It just needs to be functional.”

The excuses for keeping stuff are numerous, but prove insubstantial under scrutiny.

Laughter rippled through the audience again. “I saved this for when … ,” Glielmi said. That when, she said, will likely never come.

Glielmi said people need to accept the reality that their cherished furniture and other items will sell, at best, for 5 to 10 percent of what they paid for them

The problem with clutter, Glielmi counseled, is that “physical clutter creates mental clutter.”

She said she takes what she calls “the department store” approach to organizing a room.

“Think of your home as if it were a department store,” she said. “Look at a room and determine it’s primary purpose,” she said. Then organize it for that purpose.

Glielmi said that organizational skills should become a habit for the rest of your life.

Tackling clutter can seem overwhelming to start. But getting started, she said, is half the battle.

“I just pick a corner in an area and just start,” she said. That said, she warned people not to over-do it.

“Set an egg timer alarm. See what you can do in half an hour.”

“Don’t overwhelm yourself,” she counseled. “The most people I work with can handle no more than four hours at a time.”

Al Swanson, a former village trustee, is a semi-retired attorney, said he’s an empty nester who wants to be prepared for change.

“Eventually we’re going to move, and I need to get ready.”

He called Glielmi’s advice “common sense” but allowed that “it’s good to be reminded.

River Forester Cathy Bachman said she and her husband both recently retired, and she wants to be prepared to deal with all their personal belongings throughout their large house.

Like Swanson, she realizes downsizing is coming sooner rather than later, and she wants to “kick start” her planning process.

“It was useful to prepare (me) from an attitude perspective and to ask (myself) the important questions, and why should I keep this and not that.”

— Tackling the challenge of household clutter and downsizing —