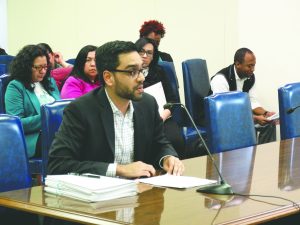 Aneesh Sohoni, executive director of the Teach for America program in Illinois, defends the alternative training program against criticism during a hearing March 12 in Springfield before an Illinois House committee that works on elementary and secondary education budgets. (Photo by Peter Hancock/Capitol News Illinois)

SPRINGFIELD – The leader of alternative teacher preparation program known as Teach for America drew sharp criticism from one Democratic state lawmaker March 12 as he appeared before a House committee seeking continued funding from the state of Illinois.

The exchange took place during a meeting of the House budget committee that deals with elementary and secondary education, and it came one day after the release of a new report showing that more than 1,000 open teaching positions in the state remained unfilled at the start of the 2018-2019 school year as school districts across the state are reporting increased difficulty in hiring qualified teachers.

“We by no means will be the only solution to the teacher shortage, but we think we can be an important player in that work,” said Aneesh Sohoni, executive director of the Teach for America program in Illinois.

Although Teach for America is a national nonprofit organization, in Illinois it works exclusively in the Chicago Public Schools system, and especially in buildings with high percentages of low-income and minority students.

In exchange for a two-year commitment, Teach for America teachers can earn vouchers to pay down their student loans or pay for additional education.

Sohoni said the program recruits young college graduates, particularly students of color, who have degrees in fields other than education, and puts them through an intensive seven-week training program to prepare them for teaching in a classroom. He said it also continues to provide coaching and support for the first two years of that new teacher’s career.

But that is a significantly shorter training period than most teachers receive through traditional programs, which usually require five years of study and student teaching to earn a bachelor’s degree, or at least three semesters to earn an education degree on top of some other bachelor’s degree.

Teach for America has been allowed to work in the Chicago school district as an alternative certification program. Gov. J.B. Pritzker’s budget proposal calls for providing $977,500 in funding for the program in the upcoming fiscal year, the same level of funding it has received the past two years.

“Part of the reason why we don’t have our young folks going into our colleges and universities saying, ‘You know what, I really want to be a teacher because my teachers really made a difference in my life and I want to be able to do that for others,’ is because we don’t respect the profession,” Stuart said. “And I think many times, organizations like yours take away from what we view as the professionalism of teachers. It disrespects the degree that our education professionals are earning, and it kind of belittles the research that goes behind all of that.”

Sohoni, however, said that when Teach for America teachers are evaluated using the same standards used to grade other instructors, they are shown to be just as effective as others in their buildings.

The March 12 hearing was only to receive information about the subject. The committee will decide later in the session whether to continue funding for Teach for America, and if so, how much the program will receive.