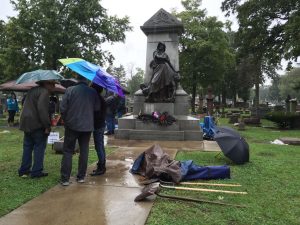 Disappointed researchers found no time capsule when they X-rayed a cylinder removed Oct. 3 by archaeologists from the site of the 1893 Haymarket Martyr’s Monument in Forest Park.

Instead, X-rays revealed a shape that might be a metal cremation urn, so the capsule was re-interred in Forest Home Cemetery, said Mark Rogovin, time-capsule hunter and cemetery expert from the Illinois Labor History Society.

For two years, researchers have been hunting for the exact location of the time capsule.

The Haymarket Martyr’s monument in Forest Home Cemetery marks the burial plots of all eight of the anarchist labor leaders who were sentenced to death or prison for conspiracy in Chicago’s 1886 Haymarket Affair. The monument draws international visitors who also pay respects at the gravesites in “Radical Row” where Emma Goldman and other anarchists are buried. The monument is maintained by the ILHS, which completed a $30,000 restoration in 2011 for the 125th anniversary of the Haymarket Affair.

A few years ago, researchers found newspaper references to a time capsule buried during the monument’s cornerstone dedication, attended by 3,500 supporters, in Nov. 1892.

“When generations to come dig up these records and read them, they will wonder that such barbarity could have been tolerated in the Nineteenth century,” said Michael Britzius, president of the Cigarmaker’s Union, according to an account in the Chicago Morning Record-News.

Researchers also found a hand-written inventory of the capsule including letters from the condemned men, photos, trial documents and newspaper clippings. The still-unfound capsule may also contain a bust of rabble-rouser anarchist August Spies, who was hanged in connection with the Haymarket incidents.

Last summer, ground-penetrating radar at the site first pointed to a possible disturbance behind the monument, but at the October dig, archaeologists found only an irrigation pipe at a depth of about 100 cm.

Another “unit” was opened where a second radar disturbance was documented. Scientists uncovered what appeared to be a cremation urn vault, possibly of Haymarket anarchist Oscar Neebe, pardoned by Illinois Gov. John Altgeld, who died in 1916 and who was listed as buried in the plot.

Researchers believed the cylinder beneath the vault might contain the time capsule, since cemetery records did not show any other burials in the plot. But they were mistaken, Rogovin said.

The ILHS will regroup and decide how to proceed with the hunt for the time capsule, Rogovin said.

Meanwhile, Oak Park Librarian Bleue Benton will continue her research through the Ann Arbor, Mich. archives of the Pioneer Aid and Support Society, which commissioned the monument and provided support for Haymarket Martyrs’ family members. Because seven of the eight Haymarket Martyrs were German immigrants, most of the society’s minutes are written in pre-1940 Old German “Sütterlinschrift” script, Benton said.

The society would most likely need another court order to dig again.

“We are almost certain the time capsule is here,” Rogovin said. “We just need to figure out what our next course of action will be.”

Archaeologists and researchers will talk about the dig and the search for the capsule at an Oct. 27 meeting of the Historical Society of Forest Park.

— Unearthed cylinder found not to be a Haymarket 1892 time capsule  —