Real estate developers, business executives, and even local officials, evaluating projects in East St. Louis, can now benefit from a state-of-the-art, interactive, three-dimensional map, illustrating in unprecedented detail the real estate inventory and overall layout of the city, according to Juwanna N. Brown, the city’s project coordinator for community and economic development.

The innovative map offers 3-D images of every structure and parcel of real estate in the city. The images allow viewers to not only assess the merits of each building but understand each structure’s relationship to the surrounding landscape and critical infrastructure, Brown explained.

Developed in conjunction with Torrance, CA-based CyberCity 3D, the map is one of the first of its type in the area, Brown notes.

“The 3D map may be most useful for potential developers, who can use it to visualize the environmental context within which a proposed project will operate, allowing them to see what East St. Louis has to offer, from the comfort of their own office,” Brown said.

“The 3D map will give developers a sense of the size and depth of the land and real estate available in the city, as well as the proximity of a specific proposed development to transit options such as the four major highways surrounding East St. Louis, the Mississippi River, nearby airports, and available public transportation options – all important things to consider when investing in a location,” she continued.

The map can also allow developers to easily help determine when properties qualify for tax or other incentives, such as those now offered in federally designated Opportunity Zones.

That is particularly important as East St. Louis works to market the five Opportunity Zones within the city limits.

“Almost all of these Opportunity Zones are located in the geographic areas where the city’s economic development priorities lie,” Brown noted. “The public can now see whether a proposed project will be located in an eligible area to receive incentives.”

“As the City of East St. Louis works toward a vision for comprehensive economic development, the 3D map will allow the City to better understand its built environment while setting the stage for future development projects,” Brown said.

In addition to allowing potential developers to better visualize the city’s assets, the 3D map will hopefully prompt government officials, the public, and investors to begin thinking about how innovative technologies can be utilized for, by, and in collaboration with cities that are economically disinvested, she adds.

The 3D map is publicly available and currently showcased on the landing page of the City’s website (www.cesl.us) 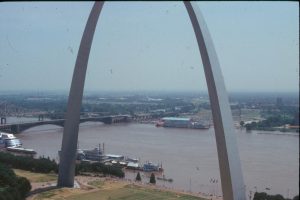 The U.S. Coast Guard Upper Mississippi River closed the St. Louis Harbor May 2 due to record flooding along the river.  (Photo courtesy of NWS)

Representatives from the National Weather Service (NWS) the U.S. Army Corps of Engineers, and dozens of local fire departments, law enforcement agencies, sanitary sewer and levee districts, public works departments, and government officials all convened last month during a county EMA-organized flood forecast meeting.  Topics ranged from the role of the county EMA as a central response coordinator to sandbagging and road closures.

An unanticipated issue arising during the meeting: the inability of frequently-flood-damaged cities like Alton to qualify for badly needed federal flood recovery funding due to underreporting of minor flood damage in other communities.

After major floods, the Federal Emergency Management Agency (FEMA) allocates recovering funding to states for distribution to local jurisdiction. However, such funding is only allocated after states reach federal established flood damage thresholds.

Communities like Grafton or Alton, which may experience multi-million-dollar flood losses, generally report flood damage promptly to the state.  However, other communities – which may only experience minor flood damage – often fail to report damage to state officials. That means total documented flood damage in the state does not reach the levels necessary to qualify for federal assistance, several local officials noted during the meeting.

Instruction on documenting flood damage and filing federal disaster declarations was provided during the event.

As the Chronicle went to press, record or near-record flooding was predicted for several Metro East towns along the Mississippi River. The NWS Advanced Hydrology Prediction Services projected a midweek crest of 42.5 feet on the river at St. Louis. Flood stage there is 30 feet.

Traffic control devices and directional signage, including dynamic message boards, have been deployed to guide motorists safely around major closures.  Travelers are advised to consider alternate routes or allow additional time to travel known flood-prone areas.  An IDOT statement urges all motorists to “be patient,” reduce speed and exercise caution throughout the Metro East region – as traffic patterns and travel times will likely be affected around the area.

The IDOT advises motorists to frequent consult its website: www.idot.illinois.gov/home/Comm/emergency-road-closuresfor the latest information on roadway closures throughout Illinois.

Updates on the impacts to traffic are available at http://stl-traffic.org.

The Bank of Edwardsville is sharing a $10,000 grant from the Federal Home Loan Bank (FHLB) of Chicago with Justine Petersen and three other local nonprofits.

The bank in March became the first recipient of the FHLB Chicago’s Community First Awards, recognizing affordable housing and economic development initiatives. The bank won the award for its MyCommunity Home and Home Improvement loan programs, which assist individuals who seek to own or remodel a home but may not qualify for traditional loans.

The $10,000 grant — intended for donation to local nonprofit organizations — will be split among Justine Petersen, Beyond Housing, Community Action Agency of St. Louis County and Prosperity Connection.

The merger is expected to take effect in the second half of 2019, pending approval by regulators and Global Brass shareholders.

Under the terms of the merger agreement, already unanimously approved by the board of directors of Global Brass and Copper and the supervisory board of Wieland, Global shareholders will receive $44 per share in cash — a third more than the average closing price for Global shares over the past 12 months.

“Today marks a historic event in GBC’s history, as we join forces with this global industry leader, creating significant value for our shareholders and providing our employees with the opportunity to further advance their career development,” said Global Brass Board Chairman John Walker.

“The combination of two companies with very complementary strengths and geographical footprints will enable us to provide long-term supply security for our increasingly global customers who need a reliable partner to enable their growth,” said Erwin Mayr, CEO of Wieland-Werke AG. “Building on a strong strategic and cultural fit, the newly formed team will empower our customers’ and employees’ success, globally.”

In addition to ammunition components, they produce electronics, auto and home products, as well as blanks used to make coins.

Olin Corp., now based in St. Louis, no longer has a financial interest in the East Alton facility.