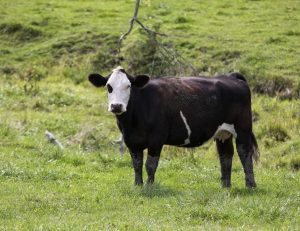 Globally, the majority of GHG emissions are driven by the energy and transportation sectors. Livestock contribute about 5.8 percent of emissions worldwide.
(Photo courtesy of Illinois Farm Bureau)

Farm animals don’t play near the role in emitting greenhouse gas (GHG) emissions as some suggest.

In fact, the livestock industry has become much more efficient and looks to be part of future climate solutions, according to Frank Mitloehner, professor of animal science and air quality Extension specialist at the University of California-Davis.

He discussed the livestock industry’s role in the climate this month during Purdue University’s annual Top Farmer Conference.

“The animals are receiving a lot of criticism these days. But, the public is really confused about livestock’s impact on the climate,” Mitloehner said. “It’s not to say livestock doesn’t have any impact. It does. It’s important to understand it.”

Globally, the majority of GHG emissions are driven by the energy and transportation sectors. Livestock contribute about 5.8 percent of emissions worldwide.

But, in the U.S., efficiencies in livestock production help farmers reduce GHG to just 4 percent of all emissions nationwide.

“About 80 percent of all livestock-related GHG stems from developing countries, with about 20 percent from developed countries,” Mitloehner said. “This is not finger-pointing. It’s just important to understand where there’s room to grow and improve.”

In the U.S., efficiencies and developments in genetics help farmers produce more beef with about 90 million cattle today than was produced with a peak of nearly 140 million cattle in 1970.

The dairy herd has also shrunk, from 25 million to 9 million head, yet milk production is up 60 percent nationwide compared to 1950. In fact, there are actually more horses in the U.S. (9.5 million head) than dairy cows. Pork production has tripled during the same time with fewer animals.

“This is exactly what sustainability is all about, doing more with less,” Mitloehner said.

And the efforts toward reducing climate impacts continue to make great strides in the livestock sector.

The use of anaerobic digesters to convert methane to biogas has already led to a 25 percent reduction in California dairy emissions, Mitloehner reported. Feed additives could also help reduce methane emissions, all helping the dairy industry to potentially become climate neutral within a decade or so, the air quality specialist said.

Mitloehner believes reducing food waste would have a much bigger impact on reducing GHG emissions long term. About 40 percent of all food is wasted in the U.S.

He notes methane gas released from animals has a half-life of about 12 years, compared to 1,000 years for carbon dioxide and 110 years for nitrous oxide.

“Methane is a flow gas. It’s destroyed at the same rate as emissions (by natural processes),” Mitloehner said. “Carbon dioxide is a stock gas. It accumulates over time. It’s important to understand this (as climate solutions are considered).”

Farm, food and environmental groups weigh in on sustainability