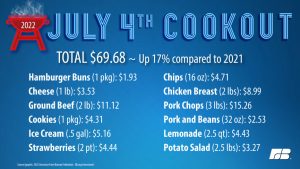 The cost breaks down to $69.68 for 10 people, or about $7 per person, and reflects the largest increase since the annual survey began a decade ago.

Inflation, supply chain disruptions and the war in Ukraine are driving the higher prices.

While food costs are rising, AFBF Chief Economist Roger Cryan stressed the trend does not translate to a windfall for farmers, who face skyrocketing input costs, especially fertilizer and fuel prices. According to the Agriculture Department’s revised Food Dollar Series, farmers receive about 8 percent of every food marketing dollar, and less for highly processed foods.

“Bottom line, in many cases the higher prices farmers are being paid aren’t covering the increase in their farm expenses,” he said. “The cost of fuel is up and fertilizer prices have tripled.”

Cryan also pointed to the cascading effects of the war in Ukraine. As Ukraine’s contributions to global food security are cut off, Russian and Belarusian fertilizer exports are constrained and other countries pull back exports to protect their domestic supplies.

“We’ve had improved agricultural technologies, new opportunities to be more productive in so many ways in agricultural production, and agricultural productivity has grown for the last 40 years without a major disruption until this year,” Cryan said Monday during a media briefing. “And this year’s war in Ukraine, I think is a very striking demonstration of how fragile the system can be and how important it is not to take our food supply for granted.” 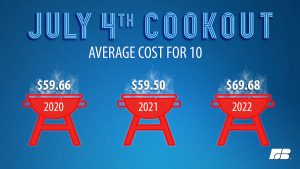 Ground beef came in with the highest year-over-year increase at 36 percent. Survey results showed 2 pounds of ground beef cost an average of $11.12.

Meanwhile, the Agriculture Department’s Producer Price Index indicates that compared to a year ago, farm-level cattle prices are up 17.5 percent, but wholesale beef prices are down 14 percent. This serves to highlight the differences between farm-level, wholesale and retail beef prices and how the past few years have had significant impacts on the beef production and cattle pricing cycles, making them all hard to predict, according to an AFBF news release.

Most of the food on the cookout list saw increases, except for sliced cheese, potato chips and strawberries.

The year-to-year direction of the market basket survey tracks with the federal government’s Consumer Price Index report for food at home and general inflation across the economy, although food inflation tends to be higher, Cryan said.

The survey is part of the Farm Bureau market basket series, which also includes the Thanksgiving Dinner Cost Survey.

Data for this year’s survey was collected by 176 volunteer shoppers across the country and in Puerto Rico, including Farm Bureau members and others.