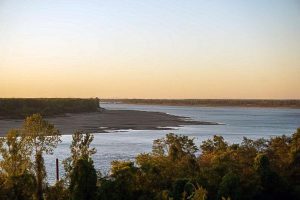 Tows, which often move 45-60 barges at a time, currently are restricted to 25 barges at a 9-foot depth. (Photo by Alexis Burnett, Pulaski-Alexander Farm Bureau)

The traffic jam on the Mississippi River caused by some of the lowest water levels in a decade will likely continue near term.

About 200 boats and 3,000 barges on the lower Mississippi River were delayed at different points of the waterway mid-October, according to the U.S. Coast Guard.

What does that mean to farmers and others who depend on barges to ship or receive products? Like many of the other supply chain issues the past couple years, expect slower shipping times and higher prices to move commodities.

“It’s a big-time disruption in the supply chain,” said Paul Rohde, vice president of the Waterways Council, a trade association for river navigation interests. “The impact is pretty severe for barge transportation.”

Tows, which often move 45 to 60 barges at a time, currently are restricted to 25 barges at a 9-foot depth, as previously reported in FarmWeek. And tonnage per barge has been reduced due to low water levels.

As a result, the cost to ship a ton of corn or soybeans down the river jumped from $29 in early September and $50 by Sept. 27 to more than $105 by mid-October, Rohde reported.

“Forty percent of the world’s food supply comes from the Mississippi River basin,” Rohde said. “This is a global crisis we could be looking at if the river level doesn’t raise in the next month.”

In the meantime, efforts ramped up in recent weeks to keep barge traffic rolling on the river. The U.S. Army Corps of Engineers deployed dredges that are working in 12-hour shifts and it’s doing survey work to look for other methods to ease the issues.

“The good news is the industry is resilient from an operational standpoint and working to make sure navigation continues and, more importantly, it’s safe navigation,” Rohde said. “With all the challenges, it (river transportation) is still the best way to move products north and south.

“This really harkens back to 2012, when we had the last real low water crisis (on the Mississippi),” he noted. “A decade ago, we had rock pinnacles to remove. We don’t have anything like that at this point, it’s just a matter of low river levels due to a lack of rainfall.”

The Mississippi River collects water from about two-thirds of the country, according to Rohde. But 81 percent of the continental U.S. was abnormally dry or in a drought as of mid-October, up from 68.7 percent three months ago, according to the U.S. Drought Monitor.

Recent low water levels surpassed some of the key milestones during the 2012 drought. But the lowest mark on the river of the past generation for navigation purposes remains 1988 when tows were restricted to 16 barges at a 9-foot depth, according to Rohde.

Farmers and grain handlers have responded to the situation with alternative storage or transportation plans.

“We haul all our grain to an inland elevator,” said Brent Clair, a farmer from Loraine (Adams County), not far from the Mississippi River at Quincy. “They’re hauling more further inland rather than going to the river.”

Ken Taake, who farms in Ullin (Pulaski County), near the convergence of the Ohio and Mississippi rivers, reported both river terminals in his area stopped taking corn and soybean shipments for a day and were limited to contracted grain for additional days, as of Oct. 17.

“The low river levels have been playing havoc with local markets,” Taake said. “Even when (local terminals) have been buying grain, the basis has been terrible.”