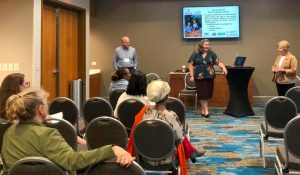 If a convenient process existed that offered a minimal amount of money to farmers for surplus specialty crops, Cook County farmer Ruth Zeldenrust would be on board.

“From a farmer’s standpoint, I can tell you that so much is just being left out in the field because I won’t sell it,” said Zeldenrust, who owns Zeldenrust Farm Market and Greenhouses in Cook County.

“But if I knew someone would take 10 bushels of loose kale that I didn’t have to bunch … and have somebody come and pick it up, and I would get a minimal amount that would cover enough to pick it rather than leave it out there, … I would think you would get almost every farmer on board.”

That’s the hope with Illinois’ Farm to Food Bank initiative, said Steve Ericson, executive director of Feeding Illinois, during a presentation at the National Agricultural Marketing Summit in Pensacola, Florida.

“We see this as having an environmental impact on reducing food waste, economic impact for rural and urban communities and creating new market opportunities and sustainability for farmers, said Raghela Scavuzzo, Illinois Farm Bureau associate director of food systems development.

During the pilot program’s first two years, nearly 2.5 million pounds of food was moved for $1.1 million. 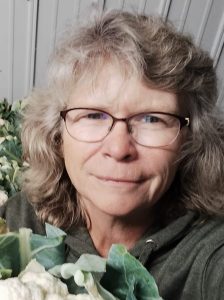 Scavuzzo, Ericson and Janie Maxwell, executive director of the Illinois Farmers Market Association, discussed findings from the pilot program, lessons learned and where the initiative is headed.

“We’re trying to build a program in Illinois that really is a farmer-first program,” said Ericson, who oversees the state’s eight regional food banks.

“We’re trying to lay the groundwork and the foundation so we have a case when we go to not just legislators, but also to any grant or other funders with whom we’re trying to build a private-public fund to support the program.”

“It was the fact that this product had been rejected. There was absolutely nothing wrong with it,” she said.

But the wholesale farm, bound by product requirements, couldn’t sell it. And donating the product to a food bank wasn’t feasible because of labor and transportation costs.

“If you can suddenly get 40 cents a pound for that zucchini, it may not make you money but at least you’ve gotten something back. And we’ve helped the community,” she said.

One size does not fit all in a Farm to Food Bank program due to varying farm sizes, so several models involving farms, farmers markets and an auction have evolved following a farmer survey. Those surveyed also agreed they’d appreciate compensation, but that wasn’t the defining factor.

“Finding somewhere to take it and knowing who to take it to were the biggest issues, and having a convenient process that wasn’t going to disrupt their system if they did this,” Scavuzzo said.

To date, the program has included 13 farms, three farmers markets and one auction. The project is being funded by a three-year, $3 million USDA Farm to Food Bank grant. The state also recently secured $14.4 million from USDA for the creation of a Local Food Purchasing Cooperative Agreement that will allow the state to purchase produce, proteins and fresh processed foods directly from underserved farmers at fair market value.

The Farm to Food Bank pilot program will help determine how much the initiative could cost in the long term and how to help farms of all sizes grow, reduce their waste and costs while feeding the community.

Ericson added they don’t want to compete in the wholesale space or disrupt donations already being made by farmers to local food pantries.

“We’re just going to keep adding to the soup until we figure out what the best mixture is,” Ericson said. “And then hopefully we can write a program at the end.”