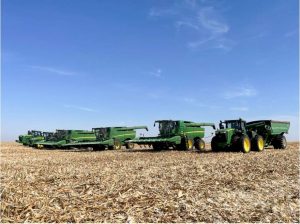 McLean County farmers used four combines, three to four tractors and grain carts and at least six semis to help finish harvesting crops on the farm of Mark Hines after he was injured while working on a combine. (Photo by Anna Ziegler, McLean County Farm Bureau assistant manager)

As a leader in the ag community, Mark Hines has witnessed farmers’ ability to mobilize and help others many times.

But he has an even greater appreciation for such care and efforts after an unfortunate harvest accident landed the McLean County Farm Bureau president in the hospital.

Hines was making some adjustments to his combine when the accident occurred. He broke one of his legs in two places and broke his nose.

After lying in the field for some time with multiple injuries, he was located, and first responders were called and took him to a nearby hospital in Bloomington-Normal. He was later transferred to Carle Hospital in Champaign-Urbana for surgery.

“I still have pain in my leg and more therapy before I can go home,” Hines told FarmWeek during a phone interview from the hospital Oct. 25, about a week after the incident.

As for harvest, the local ag community rallied around Hines and were on pace to have all his crops in the bin before Halloween.

“I’m extremely grateful and blessed. Friends, neighbors and relatives stepped up immediately,” Hines said. “I don’t know if it was even a day before I was told not to worry about harvest, it would be taken care of.”

The effort to organize a volunteer team to complete Hines’ harvest was led by McLean County Farm Bureau staff, members and Carl Neubauer, a longtime friend who served on the county board for 21 years.

“I’ve known Mark since we were kids in 4-H,” Neubauer said. “We served on the Farm Bureau board for many years.

“As is typical in farm community, we knew something was amiss before I even got the phone call (about Hines’ accident),” he noted. “We knew we had to get organized. I ended up in charge (of the community harvest for Hines) the way it worked out, but four or five guys would’ve done it. Texts and calls started coming immediately from people who wanted to help.”

The volunteers harvested the final 270 acres of corn on Hines’ farm and were nearly done with the final 170 acres of beans, prior to a rain delay Oct. 25. Another friend, former McLean Farm Bureau President Scott Hoeft, combined some of the smaller patches on Hines’ farm while teams of volunteers took care of the big fields.

“I was turning people away to come. We could only safely have so many people in the field,” Neubauer said. “We’ve got a field of beans left, but we’re going to wait until after the rain (Oct. 25) to finish it.”

Neubauer was about 60 percent through harvest on his own farm, prior to leading the community effort, and estimates about 70 percent to 75 percent of harvest was complete in his area the week before Halloween.

“We’re in pretty good shape,” he said. “By (this week), the biggest share will be done.”

That includes Hines’ crops, which should be in the bin by the time he returns home.

“I’ve always seen articles about groups of farmers rallying for a sick or deceased neighbor,” Hines said. “I always thought that was one of the very unique and neat things about ag, how farmers rally when someone needs help —I just never thought it would be me.”