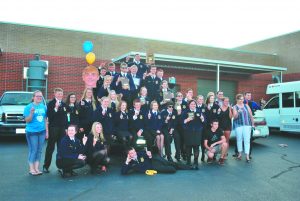 This week’s farm and rural news report, unlike USDA’s state crop progress reports, will not end with this publication. We have details on how to stay up to date on the Illinois harvest, which is approaching its end. Also this week: farmers are once again receiving lower prices for their products, according to USDA. In addition, we have info on a Peoria-area couple who are being honored for their conservation efforts, and more news for farmers and rural dwellers. Please read on …

This report marked the final weekly Illinois Crop Progress and Condition report for 2019, though harvest, in some areas of Illinois, remains uncompleted. NASS’ national weekly crop progress report, which includes state level estimates, will continue due to harvest delays in Illinois and elsewhere. Monthly reports will be released January through March, with weekly crop progress reports resuming in April 2020, USDA-NASS announced.

Producers received lower prices during October for apples, market eggs, and strawberries, but higher prices for cattle, lettuce, milk, and broilers. In addition to prices, the indexes are influenced by the volume change of commodities producers market. In October, there was decreased monthly movement of cattle, milk, broilers, and greenhouse and nursery and increased marketing for soybeans, corn, cotton, and calves, according to the report.

SPRINGFIELD — A pair of notable central Illinoisans will be honored for conservation practices when the Illinois Conservation Foundation Board of Directors inducts Diane and Doug Oberhelman of Edwards into the Illinois Outdoor Hall of Fame in April 2020. For their exemplary service in and commitments to improving conservation efforts and outdoor recreation opportunities in Illinois, the formal induction of the Oberhelmans will occur during a ceremony at the annual ICF Gala at the Union League Club in Chicago.

Diane Oberhelman is the founder and Chairman of Cullinan Properties, Ltd., a Peoria-based real estate and development firm. Doug Oberhelman is the retired Chairman and CEO of Caterpillar Inc., the Illinois-based manufacturer of construction and mining equipment, diesel and natural gas engines, industrial gas turbines and diesel-electric locomotives.

“While Diane and Doug may be more well-known for their Hall of Fame careers in business, the Oberhelmans have long advocated for wetlands protection, wildlife habitat restoration and enhancement, and preserving our natural landscapes for future generations to enjoy,” said Colleen Callahan, chair of the ICF board of directors and director of the Illinois Department of Natural Resources. “We are delighted and honored to recognize them for the work they have done and continue to do in natural resources stewardship by selecting them for induction into the Illinois Outdoor Hall of Fame.”

Since 2002, the ICF has recognized Illinoisans for their significant contributions and unparalleled dedication in preserving, promoting, enhancing or supporting natural resources and outdoor recreation opportunities with induction into the Illinois Outdoor Hall of Fame.

INDIANAPOLIS — The Waterloo, Illinois FFA chapter was named the 2019 National Premier Chapter: Growing Leaders at the National FFA Convention and Expo, held recently in Indianapolis. Waterloo FFA members captured the honor by creating a workout video that promoted the mental and physical well-being of K-3rd-grade students. Waterloo FFA came up with age-appropriate exercises and activities to include in the filming of their video. Their “Fun Fitness in Ag” video allowed members to work together to create a fun video that influenced those involved, according to a National FFA news release,

The National Chapter Award program recognizes outstanding FFA chapters that actively implement the mission and strategies of the organization. The program emphasizes growing leaders, building communities and strengthening agriculture, with chapters awarded for providing educational experiences for the entire membership. Waterloo is a town of around 8,000 people in Monroe County.

SPRINGFIELD — Registration is required by Dec. 9 for the Illinois Pork Producers Association’s Swine Day 2019, to be held Dec. 13 at the Illinois Department of Agriculture Building on the state fairgrounds. Speakers including State Veterinarian Mark Ernst and Dr. Jim Lowe of the University of Illinois Extension will be among the speakers addressing African swine fever and other issues for the benefit of farm owners, managers, growers and employees. Visit www.ilpork.com for registration details.

46 million turkeys are consumed by Americans during the Thanksgiving holiday. (University of Illinois Extension)