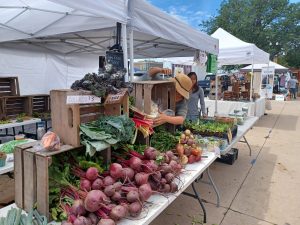 A vendor from Down River Farm arranges fresh produce for sale during a recent Peoria Riverfront Market sale. Revenue from LINK usage at Illinois farmers markets is on the rise, according to the Illinois Farm Bureau. (Photo by Tim Alexander)

This week: Drought pressure is still causing crops to lag slightly behind average pace, though recent rains have provided relief to some areas. We also have a report on the recent waiver of certain fertilizer tariffs and info on the impact of the LINK-SNAP program on farmers markets. Keep reading for these and more kernels of information …

“Unfortunately, the driest part of the state got much less, with parts of Piatt, Champaign, and Vermilion Counties picking up less than one-half-inch total,” Ford reported, adding that July to date has been within one degree of normal in most of northern and central Illinois, and 1-2 degrees warmer than normal in southern Illinois. “Carbondale has had eight days so far this year with a nighttime low temperature above 75 degrees, tied with 1980 and 1934 for the second most on their 120-year record,” Ford said.

The rain missed large swaths of southwestern Illinois, with only two hundredths of an inch to five hundredths of an inch recorded in the region over the weekend, according to Nathan Johanning, University of Illinois Commercial Agriculture Extension Educator for the area. “Crops are holding their own for the amount of heat and dry weather that we have had,” Johanning said. “Double crop soybeans had enough rain to get going but are starting to show some stress now.”

“This is important news for Illinois corn farmers who have faced fertilizer prices more than double this year and were fearful of further increases. Tariffs would have exacerbated what was already a massive problem for Illinois family farmers. Illinois Corn has talked with our elected officials about fertilizer price increases and even led our members to contact CF Industries to share the impact of the price increases on their farms. Our national association, National Corn Growers Association, even testified at an ITC public hearing. We’ve worked hard to make our voices heard and it’s encouraging that ITC listened.”

The ITC decision took effect immediately. In a news release, Illinois Corn said farmers continue to be concerned about consolidation in the fertilizer industry. ICGA expects the doubling of fertilizer prices to continue into the 2023 crop year, stressing the profitability of Illinois farm families.

BLOOMINGTON — An Illinois Farm Bureau-FarmWeek analysis of USDA Food and Nutrition Service data found the number of Illinois “direct marketing” farmers and farmers markets accepting LINK-SNAP have soared since the development of a “matching” program that allows LINK card holders who spend $25 at farmers markets to receive a matching $25. Likewise, the amount of LINK-SNAP benefits spent on food sold directly by those farmers and at those markets has also greatly increased.

“Quite frankly, it has huge economic and health benefits to the community,” Janie Maxwell, executive director of the Illinois Farmers Market Association, told IFB-FarmWeek. “(Using LINK at farmers markets) means a regular stream of income to a farmer at the market, increased sales and a larger customer base that can utilize the farmers market and bring them more profits.”

BLOOMINGTON — Normal Community High School, Evanston Township High School and the Kane County Juvenile Justice Center School are among 65 Illinois schools receiving up to $4,000 each from Compeer Financial for their agricultural education programs. The funding, part of a Compeer grant program, can be used in a variety of ways. At NCHS, the money will go towards greenhouse enhancements, including replacement of heating and cooling systems, environmental and water controls and plant benches, according to a news release.

For every $1 of LINK benefits redeemed at a farmers market, about $1.71 is reinvested back into the community hosting the market. (Illinois Farmers Market Association)