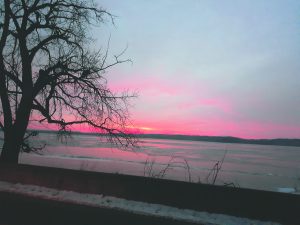 The sun rises on the Illinois River at South Rome in northern Peoria County Jan. 22. The Illinois Corn Growers Association has identified lock and dam repair as a top priority for 2020. (Photo by Tim Alexander)

Last week’s White House announcement of two trade resolutions had no positive effect on crop markets — why? Also: last week’s Senate impeachment hearings were “Trumped” by the president’s announcement that a replacement for the WOTUS rule had been clarified by the EPA. In other news, the Illinois Corn Growers Association has announced their 2020 priorities, and Illinois pork producers are gearing up to descend on Springfield. For more news for Illinois farmers and rural dwellers, please read on …

URBANA — University of Illinois agricultural economist Todd Hubbs was among market pundits to speculate last week as to why the signing of the phase one trade deal with China and approval of the United States-Mexico-Canada trade agreement had no positive effect on commodity markets. In fact, markets initially seemed to react negatively to the news.

“The USMCA, while providing stability with two major trading partners, held limited short-term upside potential for corn and soybean exports. Significant skepticism on the ability of China to hit phase one trade targets among many market participants provided no support for prices,” Hubbs noted in an article posted by the U of I College of ACES.

To reach the $36.5 billion target for Chinese purchases of U.S. ag commodities for 2020 outlined in phase one, “substantial Chinese buying must occur this year in U.S. corn and soybean markets,” according to Hubbs.

Market analyst Jerry Gulke of Farm Journal/AgWeb said there was hope China would enter the market and begin purchasing U.S. corn, but “now we have this virus transferring all over China, which is interrupting transportation and demand — it just put things into chaos,” said Gulke, adding that the markets are being very conservative with soybeans as well. “You would think that if China was interested in buying soybeans from us that $9 would be a good price for them. There are a lot of concerns in beans currently.” Gulke made his remarks last week on his “Weekend Market Report.”

BLOOMINGTON — President Trump held true to his campaign promise to farmers to repeal and replace the Obama-era Waters of the United States rule under the Clean Water Act with the Jan. 23 announcement that the U.S. Environmental Protection Agency and Department of the Army had agreed on terms for the new Navigable Waters Protection Act. The WOTUS replacement, announced during the Senate impeachment hearing of Trump, differs from WOTUS in that only navigable waterways can be federally regulated — much to the environmental and conservation groups like the Sierra Club.

Under the NWPA, categories of waters that can be federally regulated are restricted to territorial seas and traditional navigable waters, perennial and intermittent tributaries to territorial seas and navigable waters, certain lakes, ponds and impoundments, and wetlands adjacent to jurisdictional waters. Excluded from regulation under the NWPA are artificial lakes and ponds, groundwater (including tile drains) and ephemeral streams.

According to the Illinois Farm Bureau, the new rule also respects the right of states to regulate water. “We look forward to monitoring the implementation of this final rule and keeping our members informed,” said Lauren Lurkins, IFB director of environmental policy. (IFB news)

BLOOMINGTON — Surveys indicate that Illinois corn growers become members in the Illinois Corn Growers Association for the representation provided in Springfield, according to ICGA communications director Lindsay Mitchell. To that end, ICGA leaders announced their top priorities for 2020, which are 1) finalize the USMCA trade agreement; 2) pass a low-carbon, high octane standard for fuel; and 3) secure funds for pre-engineering and design work for one lock on the Illinois or Mississippi River.

It appears that ICGA’s goals may be attainable, with finalization of USMCA nearly secure and five Illinois River locks and dams scheduled for closure and repair by the U.S. Army Corps of Engineers this summer. ICGA has been advocating for lock and dam upgrades for more than 20 years. “ICGA does see a pathway for future gains on the lock and dam modernization push, so we are hopeful to deliver on this needed infrastructure investment in 2020,” the ICGA stated in a Jan. 23 daily news update to members.

SPRINGFIELD — The Illinois Pork Producers Association is again offering free admission to all Illinois pig farmers for the Illinois Pork Expo Trade Show, to be held Feb. 4-5 at the bank of Springfield Center. Producers will be able to walk the trade show floor, attend the legislative reception and mingle with legislators, support the Pork Production Auction, watch RFD Radio Live on the trade show floor, listen to Ron Hanson speak on succession planning, visit Pork Central and enjoy free cookies, and catch up with friends and fellow producers from across the state. IPPA will also hold its annual meeting and offer certified livestock manager training (must preregister). In addition, a presentation on animal ag activism will be given by Allyson Jones-Brimmer. Visit www.ilpork.com for more information, registration and expo agenda. (IPPA news)

U of I offering small farm webinars

URBANA — University of Illinois Extension is offering a weekly educational series for everyone interested in the small farm community. This series will provide practical knowledge on emerging topics in local food production in Illinois. These online presentations will give small farm producers a look at how leading practices in production, management, and marketing enable operations to improve profitability and sustainability. Webinars will be held from noon to 1 p.m. on select Thursdays, Jan. 30 to 19. For more information, call Extension at 309-663-8306. (U of I Extension news)