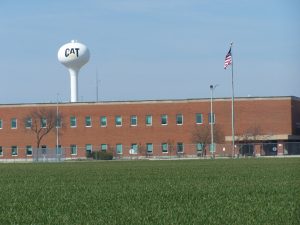 The Mossville Caterpillar plant will be the site of a large greenhouse project in collaboration with SunSelect. (Tim Alexander photo)

The 45th President of the United States confirmed last week that he is aware of the importance of U.S. agriculture by issuing a proclamation declaring March 21 National Agriculture Day. There was also actual news of significance, including the explosion of President Trump’s campaign pledge to rid the country of the Affordable HealthCare Act, which, warts and all, has helped millions of rural Americans and small business owners obtain health insurance coverage. There was also some Illinois-specific farm news to report from last week, so let’s take a look:

“National Agriculture Day (is) set aside to pay tribute to the farmers and ranchers of our nation,” said Young, in a USDA news release. “The work of American producers and growers ensures consumers in our country have plenty of safe food and a wide variety at a lower cost than much of the world. Through their efficiency, they are able to produce more food and fiber than is demanded in our country, generating a trade surplus in agricultural products for the United States.

“As President Trump noted in the Presidential Proclamation declaring today National Agriculture Day, ‘American agriculture is the largest positive contributor to our nation’s net trade balance, providing 10 percent of our exports and millions of jobs.’ So today, the employees of USDA thank our farmers and ranchers for all they do to feed our nation and the world, for their work conserving and preserving the land, and for being actively engaged in their local communities.”

SPRINGFIELD — Osco, Ill. pork producer and National Pork Board member Gary Asay was among a group of NPB representatives to travel to Mexico City March 13-18 to build trade relations and investigate new trade opportunities with Mexico for U.S. pork. Calling Mexico one of America’s most important export markets, the group focused on emphasizing the safety and reliability of the U.S. pork supply.

“We saw that our investment of producer dollars in the U.S. Meat Export Federation returns great dividends as it develops relationships with importers and retailers,” noted Jan Archer, NPB president. “Our Mexican neighbors import fresh pork and ham, but also the products that have less value to the U.S. consumer. Pork byproducts, such as offal and pig heads, fill and important need in the Mexican marketplace.”

The U.S. contingent met with the USDA Foreign Ag Service to understand Mexico’s economy and its current political climate, where relations have turned frosty largely due to our president’s insistence to build a U.S.-Mexico border wall and “charge” Mexico “for the bill.” The group visited stores, supermarkets, and fast-casual restaurants, and met with Mexico’s largest retail chains selling U.S. pork to hear their plans for future growth. The group also met with some of Mexico’s biggest importers to discuss mutual interests and ways to maintain their relationships.

PEORIA — A public affairs official with Caterpillar, Inc. world headquarters in Peoria — for now — told this reporter last week that Big Yellow’s plan to construct a big greenhouse with SunSelect adjacent to the Mossville Technology Center is moving forward. The greenhouse will produce tomatoes, peppers and other vegetables powered by co-products produced by Caterpillar’s Mossville (Peoria County) facility for large retailers, grocery and restaurant chains.

“Since the initial announcement last year, through the collaborative efforts of the SunSelect and Caterpillar teams, significant progress toward a final design for the project has been made,” said Bridget M. Young, CAT senior public affairs manager, corporate social innovation division. “The teams continue to evaluate certain design system options relative to their impact on the need to achieve a minimum return on investment requirement for the project prior to due diligence being completed and the project proceeding to the next stage.”

Young said it was still too early to speculate on ground-breaking or completion dates for the project.

“The Illinois Manure Calculator is built for Illinois-specific manure plan rules, enabling a livestock producer to quickly balance manure applications with field crop nutrient needs,” according to Ted Funk, ag engineering consultant to the IPPA. “The user enters manure storages with the respective manure sample data, information for fields that will receive manure, and the general type of manure application equipment being used.” The app automates the nutrient management planning worksheet that livestock producers are required to understand under Certified Livestock Manager Training workshops coordinated by the University of Illinois Extension.

It works to calculate manure application rates based on a producer’s choice of N or P limits, and the N, P and K to be applied. The app allows users to enter a trial application rate to gauge its effect on nutrient balance. Calculations can be emailed to users for entry into their farm’s central manure management plan. “This free manure rate calculator will give producers another tool in their toolbox for carefully developing their manure management plans while utilizing best management practices,” said Jennifer Tirey, IPPA executive director. (IPPA news)