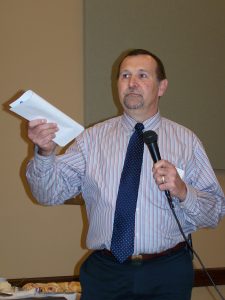 In this week’s news roundup for Illinois farmers and rural dwellers, the state’s corn grower association is backing the recent U.S. Environmental Protection Agency decision to allow the use of chlorpyrifos as a crop protection tool. Also of importance to farmers, Illinois State Senator David Koehler has introduced bills that would seek reform to the state’s CAFO laws. We’ve also got a report on the mock animal disease outbreak held in Springfield this week and highlights of USDA’s prospective plantings and grain stocks reports. Please read on…

The substance was under EPA review and a comment period was established under the Obama administration after being used by farmers for decades. A decision whether or not to ban the pesticide was due from EPA before March 31, but under the Trump administration directive no EPA recommendation will be forthcoming.

“We’ve commented to EPA many times, on many issues, that we support their decisions being made on sound science in a transparent manner,” commented Durdan. “We hope that this decision by the Agency to deny the petition signals a change in approach under Administrator Pruitt’s leadership.” (Illinois Corn Daily Update)

Immigrants made up 17 percent of the U.S.’ 161 million member workforce in 2016, with 33 percent working in agriculture. (Pew Institute/TIME)

An accompanying news release notes the recent success of anti-CAFO environmental groups who lobbied against hog barns planned on a farm in rural Fulton County near Bernadotte. Permits for the construction of the 20,000-head farm were withdrawn after considerable pushback from opposition groups and some area residents. Without offering many specifics, Koehler said his legislation, which is supported by fellow Democratic state senators John Mulroe (D-Chicago) and Ira Silverstein (D-Chicago), will bring transparency to the process of planning and expanding hog farms.

“People in rural Illinois deserve to know exactly what is going to be built in their back yard,” Koehler stated. “Registering these facilities and getting wastewater management plans on file are just a few of the steps we can take to make sure the public health of rural Illinoisans will be protected.”

Koehler’s legislation will almost certainly seek changes to the Livestock Management Facilities Act (LMFA), which has overseen CAFO regulatory matters since it became state law in 1996. However, both Warren Goetsch, deputy director of the Illinois Department of Agriculture, and Jennifer Tirey, Illinois Pork Producers Association executive director, told this columnist in March that the current LMFA is functioning extremely and well and provides a good balance between farmers’ ability to earn a living and protecting the environment. Stay tuned for more details on the bills as they become available.

SPRINGFIELD — A simulated animal foot-and-mouth disease (FMD) crisis drill was held at the Illinois Department of Agriculture March 28, involving first responders, veterinarians, farmers and farm commodity association members. The gathering featured a scale model tabletop diorama of a small agricultural community used to simulate the actions producers and others must adhere to if the introduction of a highly contagious foreign animal disease such as FMD were to occur in our state.

Participants became a part of the response effort from diagnosing the first case (on Illinois pork producer Phil Borgic’s simulated farm), mobilizing the local response, controlling and eradicating the disease, and resuming normal business operations. Maintaining consumer confidence in the U.S. beef and pork industries through education and communication is essential, presenters at the exercise stressed. First and foremost, consumers must be made aware that FMD is an animal disease that cannot be transmitted to humans and that their food supply is unaffected by the virus, which affects cloven animals including pigs, cows and sheep.

“It is crucial that the industry be prepared for an outbreak of FMD should it occur,” said Dr. Mark Ernst, Illinois State Veterinarian, who co-hosted the seven hour event. “Having an interactive tabletop exercise where the effects of an outbreak can be seen and stakeholders from across the industry can collaborate on a plan is a remarkable asset for Illinois.”

A recent study determined revenue losses to the U.S. pork and beef industries would average $12.9 billion per year from the introduction of FMD. Total cumulative losses across the commodities modeled over ten years would come to $199.99 billion, according to the Center for Rural Development and Agricultural Policy Research Institute’s pork checkoff-funded study.

SPRINGFIELD — The USDA National Agricultural Statistics Service (NASS) released their Illinois Prospective Plantings report on March 31, reflecting the recent downward trend for corn and upward curve for soybeans. Illinois growers intend to plant 11.3 million acres of corn in 2017, down 3 percent from 2016, while soybean planted area is expected to increase by 1 percent to 10.2 million acres.