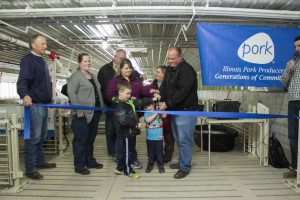 This week: Despite legislation introduced in the Illinois State Senate that would tighten regulations for large swine operations, the state’s livestock industry took another step forward in its expansion last week with an open house for two new pig barns in Rossville. In addition, USDA-NASS has begun issuing its weekly crop progress reports; we’ll look at the latest planting conditions. We also have info on a free water quality testing program for farmers.

PEORIA — State Sen. David Koehler (D-Peoria) introduced a legislative package that would tighten existing rules for confined animal feeding operations (CAFOs) under the Livestock Management Facilities Act (LMFA) in late March. While the Illinois Senate Democrat legislative website cites Koehler’s measures as Senate bills 1272 and 1273, the Associated Press reported last week that as many as four separate measures involving CAFO reform measures had been introduced, at least two of which are sponsored by the 46th District senator.

The bills are modeled after current laws in other states, including Iowa, Indiana and Wisconsin, according to Koehler. Specifically, the suite of legislation calls for all CAFOs to register with the Illinois Environmental Protection Agency, and seeks to close a “loophole” in state law that allows the expansion of existing operations without seeking a legal permit. A separate bill would require facilities to file pre-construction waste management plans and publicly disclose the plans at a public hearing if requested by local residents and county boards.

A final bill would give neighbors of proposed operations the right to challenge the approvals issued by the Illinois Department of Agriculture, the AP reported. Koehler’s office was contacted on Monday, April 3 by this reporter, who requested a copy of the legislation and comment from the senator. There was no response by press time to a request for a copy of the legislation or a comment from the senator.

ROSSVILLE — Meanwhile, the Illinois Livestock Development Group (ILDG) and Illinois Pork Producers Association (IPPA) hosted an open-house celebration for two new hog barns with 250 guests at the Carl and Jody Clark farm near Rossville, as planned. The third-generation farmers opened up their two new 41,000-head wean to finish hog barns on April 6 to allow neighbors and the public an opportunity to tour the operation, which they say will allow them and their two young boys to remain on the family farm.

“My father gave me the opportunity to come back and farm with him, and then passed it on to me. I want to give my sons the same chance and keep our farm going for generations to come,” Carl Clark said. Local tax revenues to Vermilion County generated by the barns are estimated at more than $20,000 per year in new money, with a sizable percentage going to the Rossville/Alvin school district, according to the ILDG.

BLOOMINGTON — Farmers can have their water sources tested for nitrate presence and remain anonymous under a program offered by Illinois Corn and administered through the Illinois Nutrient Loss Reduction Strategy (NLRS). The NLRS is a strategy designed to encourage farmers to engage best management practices and make changes to fit their family farm that reduce nutrient losses. The free program is being offered continuously at dozens of county farm bureau and soul and water conservation offices throughout the state, and will continue throughout the summer at some locations.

Some locations will offer water testing only on certain days or by reservation. Contact Carolyn Wade, Illinois Corn, at (309) 231-7440, for more information, or contact your county farm bureau or SWCD office to see if they are participating. A listing of participating offices, dates and times for testing is currently accessible through the Illinois Corn website at www.ilcorn.org.

Illinois has roughly 50 different varieties of peaches. (Ill. Ag in the Classroom)

URBANA — Wildly fluctuating temperatures and “lots of snow and rain” marked the month of March, observed Jim Angel, Illinois State Climatologist, in his weekly weather blog from his office in the Illinois Water Survey building. “The warmest daily report was Belleville with 86 degrees on March 21. Chicago Midway reported a high of 82 degrees on March 24,” Angel reported. “Meanwhile, the coldest temperatures of the month were experienced in the northwest corner of the state, including Altona and Illinois City with a low of 6 degrees on March 25.”

The statewide average temperature for March was 42.3 degrees, one degree above normal. March precipitation for the state was 3.62 inches, 0.66 inches above normal. Parts of Illinois also saw a fair share of snow during the month, helping the water table and soil moisture levels to remain consistent (see prior news item) and helping ensure optimal soil moisture conditions for spring planting across most of the state.