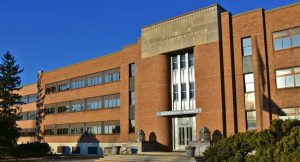 The USDA National Center for Agricultural Utilization and Research (NCAUR), also known as the Peoria Ag Lab, is in line for a proposed federal grant that would fund climate and sustainability research. (USDA photo)

In this week’s look between the rows, we examine why farmers can look forward to higher or steady prices for their commodities this year. We also have a report on federal research money heading to USDA’s Peoria Ag Lab for climate and sustainability studies, and news of an upcoming farm financial webinar series offered by the Illinois Soybean Association checkoff.

URBANA, Ill. – What is good news for farmers is not always greeted with enthusiasm by the consumer. Take for instance USDA’s newly-issued June Hogs and Pigs report, which places the June 1 inventory of all hogs and pigs at 75.7 million head, up about one percent from last quarter and two percent from a year ago. But market hog and breeding inventories are about two percent less than a year ago, as anticipated. In fact, each class of market hog inventories is down compared to the same time last year. Overall, the number of hogs weighing less than 180 pounds is nearly 2.5 percent smaller than a year ago.

Those will be the market hogs arriving at processing plants from July through November 2021, according to Jason Franken, agricultural economist at Western Illinois University and contributor to the University of Illinois farmdoc team. The economist noted that the inventory numbers support higher prices for pork at supermarkets.

“The decline in lighter-weight hogs partly reflects that the March through May pig crop is 3 percent smaller than last year and below the range expected pre-report, with about 3 percent fewer sows farrowed and only 10.95 pigs saved per litter; this was expected to exceed the 11.00 pigs per litter observed over the same period last year,” said Franken. “Monthly data reflect that the lower number of pigs saved per litter for the period really stems from a dip in March with a return to expected levels more recently. Looking forward, summer and fall farrowing intentions are down 4 percent and 2 percent from actual farrowings last year. These numbers should similarly imply somewhat smaller slaughter numbers in subsequent periods.”

For producers, the report indicates profitable hog prices should persist into next year, Franken concluded. (U of I College of ACES news)

“Right now, we have an incredible opportunity to rebuild our country, create millions of good-paying jobs in our communities and invest in agricultural research as we build our communities back, better,” Congresswoman Bustos said. “I’m thrilled to announce that $4.5 million in funding for Peoria Ag Lab’s groundbreaking research initiatives has been included in this legislative package. Today’s announcement is the next step in the process to make this project a reality, and I look forward to working with my colleagues as we continue to bring taxpayer funds back to our communities.”

According to a joint Bustos-LaHood news release, the request would initiate novel research programs to develop and utilize crops that improve the climate resilience and sustainability of food and energy production, foster new economic opportunities for rural communities and biomanufacturing industries and enhance the safety and security of the food supply. The initiative focuses on wheat and barley, sorghum and industrial hemp. Implementation of the research requires the construction of a climate-controlled greenhouse,  as well as the addition of scientists and staff across four research units at the Peoria Ag Lab.

After passing committee markup, the proposal would need to advance to the full House and Senate before being brought to the President’s desk for consideration.

BLOOMINGTON – Building on its inaugural online success, the Illinois Soybean Association checkoff program has announced that their Agribusiness Management Program (AMP), in partnership with Illinois Farm Business Farm Management (FBFM) and the University of Illinois farmdoc team, will be held virtually on July 20 and 27. The web meetings will offer farmers an opportunity to gain expert financial advice on how to secure farm fiduciary success for generations, according to its sponsors.

Seminars will include guidance in areas such as succession planning, crop marketing, tax preparation, cash flow and more. Free registration is online at www.ilsoy.org/events.

SPRINGFIELD – The results of USDA’s June acreage reports arrived last week to little surprise in most of farm country. Though USDA’s March planting intentions report predicted farmers would plant 91.1 million acres of corn and 87.6 million acres of soybeans in 2021, some private forecasts predicted corn plantings could reach 95 million acres or more in the June 30 report.

Hugh Whalen, commodity risk consultant at MID-CO Commodities, appeared to have the situation sized up pretty well when he offered a prediction to the IFB last week. “Trying to forecast what’s in the report is kind of futile. You just don’t know what USDA will come up with,” he said. “The general feeling in the trade is that we’ll see an increase in both corn and soybean acres. The question is, how much.”