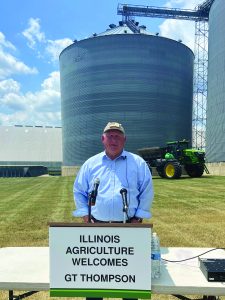 It was a rough week for the Biden administration as far as their relationship with America’s agricultural community goes; we have details. We also have news about a new cannabis cultivation course available through the University of Illinois. For more, please read on …

BLOOMINGTON — The reaction to the U.S. Environmental Protection Agency’s announcement that it would rewrite the Waters of the United States Act — effectively reversing Trump-era rollbacks of key environmental regulations — was swift from the commercial agriculture industry. Illinois Farm Bureau President Richard Guebert Jr. noted that the unfortunate effect of topsy-turvy regulations changes is that farmers are left with near-constant uncertainty on how to manage their livestock and crops.

In a prepared statement, Guebert said the IFB believes clean water is a top priority for Illinois farmers though the EPA, along with the Army Corps of Engineers, should take into account stakeholder input from those working the land each day.

“We have extended an invitation to current EPA and Army Corps of Engineers leadership to visit Illinois to see the issues firsthand, and again extend that invitation for critical stakeholder engagement,” Guebert said.

In Washington, American Farm Bureau Federation President Zippy Duvall said he was disappointed with the EPA’s June 9 announcement of its intention to reverse WOTUS, which is also known as the Navigable Waters Protection Rule.

SPRINGFIELD — The Illinois Sustainable Ag Partnership is advocating “edge of field” practice expansion to combat nutrient losses that contribute to excess nitrate and phosphorus levels in U.S. waterways. Along with encouragement of saturated buffer and constructed wetland installations, ISAP member organizations are advocating for the Illinois legislature to pass the Partners for Nutrient Loss Reduction Act, which would support county Soil and Water Conservation districts that deliver conservation programs to farmers and landowners.

ISAP’s EOF “roadmap” and associated resources are available for viewing at www.nature.org/EdgeOfField.

MAPLE PARK — Pennsylvania Republican Sen. Glenn “GT” Thompson stopped by CHS-Elburn in Maple Park last week to discuss, among other topics, why President Biden is wrong in his promotion of electric vehicles over those powered via biofuels. Thompson, a member of the House Committee on Agriculture, was there by invitation to discuss current and future committee priorities.

“I think the Biden administration is ignoring science,” said Thompson, who linked with Illinois Rep. Cheri Bustos, D-17th, to establish a bipartisan congressional crop insurance caucus in 2019. “There is a lot of misunderstanding, and part of that is ‘shame on us.’ We need to educate folks so that they truly understand that here we have something that is great for the economy and great for rural America and the environment. You can’t have a healthier climate without a healthy economy, and biofuels check that box.

“No. 2, it needs to be science-based. I have to say that the electrical cars the Biden administration has put forth is science, but it is political science; it’s not real science. No. 3, we know that (biofuels) works. I’m really concerned about the electric vehicles; it’s a solution in search of a problem. You can put a sticker on the back of an electric car that says ‘this vehicle is fueled by fossil fuels.’ I’ve looked at a lot of data and the satisfaction level of those who own electric cars is not real high.”

Thompson’s remarks came on the heels of news that the Biden administration, under pressure from labor unions and U.S. senators including from Biden’s home state of Delaware, is considering ways to provide relief to U.S. oil refiners from biofuel blending mandates. However, many are encouraging Biden’s EPA to embrace both biofuels and EVs in the effort to wean the U.S. from foreign oil dependency.

“My message to the new administration is to embrace biofuels and use these renewables to wean the nation’s motorists away from gasoline,” said  Leticia Phillips of the North American Representative Brazilian Sugarcane Industry Association. “As many in the environmental community have concluded, we need not pit EVs against renewables. The smart approach is to leverage both. They can be combined to allow drivers to go farther without harmful emissions.”

URBANA — Farmers, home growers and other cannabis enthusiasts can learn to classify and manage cannabis production in an online course through the University of Illinois.

“We cover classification and taxonomy, which is critical for proper production of any given cannabis product. How you grow and manage diverse varieties depends on whether you’re targeting THC for medical or recreational marijuana, for non-psychoactive compounds like CBD, or for hemp fiber, protein, and oils,” says DK Lee, the instructor for the course and director of online classes at the U of I Department of Crop Sciences. A recent news release says anyone can take the cannabis course, including members of the public with a basic understanding of plant biology. It is also open to current students enrolled in the department’s undergraduate, graduate, and online master’s degree programs..

The semester-long course, part of a new U of I cannabis certification program, covers the origin and history of cannabis production and progresses into modern production management. Lee said a goal of the program is to clear up misinformation about the crop and its products.

“People still believe marijuana and hemp fiber come from different plants, but it’s the same species. We just grow varieties differently to maximize particular products,” Lee said. “There’s also so much misinformation in labels on CBD and marijuana products. I want to help people understand what’s out there.” (U of I College of Aces news)

Rainfall across Illinois averaged just 33 one-hundredths of an inch during the first week of June. (USDA-NASS)