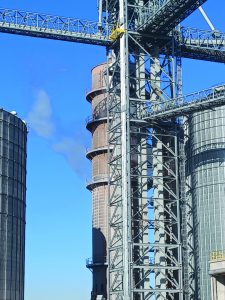 Steam is emitted from a giant grain dryer on a chilly, late October day at the Grainland Cooperative elevator in Eureka. (Photo by Tim Alexander)

This week’s farm and rural news roundup features a deep — make that shallow — dive into the havoc for ag shippers that’s resulting from historic low water levels on the Mississippi River. We also have information on GROWMARK’s new commitment to autonomous farming. Please plow ahead …

URBANA — A report issued by the USDA Office of the Chief Economist and published by the University of Illinois farmdocDAILY website examines the financial effects of record low water levels in the Mississippi River Basin. The report came after the Mississippi River water stage in Memphis, Tennessee, fell to a record of minus 10.79 feet on Oct 17, below the previous low set in July 1988.

“As river levels fall, barge operators must reduce the draft, and thus the load of each barge. In addition, as the channels narrow, operators must also reduce the size of the tow (the number of barges lashed together),” the authors wrote. “Historically barge rates have hovered around $20 per a ton. In the beginning of September, as the Mississippi River began to fall to record low levels and closures and disruptions started to mount, barge rates rapidly began increasing upwards. The St. Louis barge spot rate hit a record $106 per ton during the week of Oct 11. This spot rate had eased slightly during the second week of October, however (the rate) picked up once again during the most recent week of Oct. 25 rising to $88 per ton.”

The report explains how for farmers, a key concern of the low Mississippi River issues is the impact on “basis,” or the difference between the price paid to producers in a local market and the price of nearby futures contracts listed at the Chicago Board of Trade. “A transportation disruption such as the one we are experiencing now will weaken the basis if it increases shipment cost (either through higher barge rates or forcing local elevators to use alternative costlier shipment options), leading purchasers to reduce their cash market bids,” according to USDA’s chief economists.

The problem is spurring shippers to consider alternative barge routes and modes of shipping, noted Mike Steenhoek, executive director of the Soy Transportation Coalition. “The low water levels throughout the inland waterway system, unreliable rail service — exacerbated by the threat of a railroad strike in mid-November, truck driver shortages, and port congestion are all seeming to conspire to impede the ability of farmers to connect with domestic and international customers,” said Steenhoek. “One of the cardinal rules regarding supply chains is to avoid ‘putting all your eggs in one basket.’ When a shipper can access a variety of transportation modes and providers, the more competitive that shipper will often be in serving its customers.”

Steenhoek is touting the Great Lakes-St. Lawrence Seaway, a deep draft waterway extending 2,340 miles from the Atlantic Ocean to the head of the Great Lakes at Duluth, Minnesota, as another option for farmers to access international customers. “The Seaway is open for business and is willing and able to be an effective lifeline for farmers and agricultural shippers in a number of regions of the country,” Steenhoek said.

BLOOMINGTON — A consortium of leading agricultural cooperatives including GROWMARK and CHS are looking to ease the labor shortage affecting farmers in a new-fashioned way: investing in technology to retrofit tractors so they can operate autonomously. The newly christened Cooperative Ventures announced it will invest in Sabanto, a hardware and software company on the forefront of developing autonomous capabilities in tractors. Founded in 2018, Sabanto is deploying fully autonomous machinery performing row crop field operations throughout the United States.

“We’re very enthusiastic about the strategic benefits presented by the Sabanto investment,” said GROWMARK Director of Innovation Heather Thompson. “The labor shortage in ag retail is a very real problem. Autonomy presents an exciting solution but adopting autonomous equipment creates a new set of challenges for traditional operations. By partnering with Sabanto, GROWMARK and our FS cooperatives have the advanced opportunity to test and learn the impacts of this cutting-edge technology.”

Sabanto is currently focused on retrofitting 60- to 200-horsepower tractors to operate without humans, according to a Nov. 4 news release. The company currently automates a variety of row crop field operations, including planting, tillage, spraying, and mowing over thousands of acres throughout the Midwest. The initial investment by Cooperative Ventures is aligned with the capital fund’s core investment areas: to maximize the impact of crop production, supply chain, farm business enablement, and sustainability, the news release stated.

BLOOMINGTON — As the Illinois High School Association football playoffs switch into high gear, a pair of Illinois ag commodity groups are teaming up to provide the gift of fuel. The Illinois Corn Growers Association and Illinois Soybean Association are providing gift cards for renewable fuel purchases to the teams with the greatest distances to travel to reach their playoff games as teams fight to earn an invitation to the state championship bracket.

“The IHSA Football Playoffs embody the passion and pride that communities have for their high school athletic programs,” said IHSA Executive Director Craig Anderson. “A piece of that experience can include significant travel, so we appreciate the ISA and Illinois Corn helping fuel our schools as they take the road for playoff contests. This savings and support to our schools is sincerely appreciated.”

November’s state championship games will feature locally grown biofuels and Illinois farm families in commercials, social and digital ads, and during in-game announcements. “For some of these students and coaches, this could be their first experience with a higher blend of ethanol fuel, and I hope they feel good about the cost and the impact they will have on the environment,” said Jim Reed, IL Corn Marketing Board chairman. (Ilinois Corn news)

The 2022 Illinois Farm Assets Conference will be held Nov. 21 at the I Hotel and Conference Center in Champaign. (farmdocDAILY)