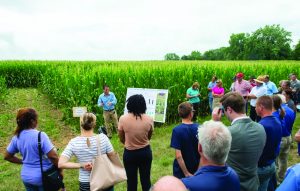 Topping this week’s agriculture news, several Illinois farmers have assumed leadership positions in national soybean organizations. In addition, we have a summary of the latest organic production numbers and news of an urban-rural collaboration yielding alternative solutions to improving the state’s water quality. For this and a bushel more, please keep reading …

Raising national awareness for Illinois agriculture has taken on new importance with the incoming Biden administration set to take control of the White House on Jan. 20, according to a Jan. 6 ISA news release. The notice calls attention to the Illinois Soybean Growers’ Voice for Soy platform, accessible by texting “SOY” to 52886 to enroll.

“New leadership and potential new legislation are quickly approaching, and, while Illinois Soybean Growers works day-in and day-out to represent the best interests of Illinois soybean farmers on Capitol Hill, we can’t do it alone,” the notice reads. “With just one text, you can become a soy advocate. ISG will monitor important issues and contact you when it’s time to act — you’ll simply click a link to make your voice heard. Together, we can protect your ability to operate in a sustainable and profitable way, now and into the future. Protect what you’ve worked so hard to create.”

Ag, food workers next up for vaccine

SPRINGFIELD — The Illinois Pork Producers Association is reminding farmers and food service workers that they are among the next in line for a COVID-19 vaccination under Phase 1B of Illinois’ vaccine distribution plan. Though local public health departments ultimately determine vaccination schedules, Phase 1B frontline workers are described as first responders, educators and essential industry workers, including postal, public transit, food and agriculture, grocery and congregate facility workers. Producers are urged to prepare in advance a list of potential vaccine recipients, including farm employees and family members, for their local public health departments. (IPPA news)

BLOOMINGTON — The 2020 Illinois Specialty Crops Conference, held virtually last week, offered a lineup of speakers and exhibitors as diverse as the state’s agriculture sector. Included was a presentation from Mark Schleusener, Illinois state statistician for the USDA National Agricultural Statistics Service, who offered a summary of the agency’s 2019 Organic Production Survey, the results of which were recently made public.

“In 2019 total organic sales in the U.S. were $9.9 billion, up 31 percent from when we did this survey in 2016 when we had around $7.5 billion. $5.8 billion was (from) crops, though livestock and poultry sales had the largest rate of growth at 44 percent, but the largest share of sales was in crops,” said Schleusener. “$3.6 billion in organics sales came out of California, and the top 10 states account for 75 percent of all sales. (With just $73 million in sales) Illinois has a ways to go before they reach the top 10.”
Schleusener also advised Illinois organic producers to respond to an upcoming 2020 vegetable chemical use survey targeted to specialty growers in order to be properly represented in USDA decision-making processes. As with all USDA surveys responses are confidential, he said.

U of I students elected as National Ag Communicators

FAYETTEVILLE, Ark. — The National Agricultural Communicators of Tomorrow recently introduced their officer team, which includes two current students of the University of Illinois.

Selected as vice president, Rachel McGreal is a sophomore at the University of Illinois, majoring in Agricultural Communications with a concentration in journalism and a minor in food and environmental sciences. Rachel grew up on a family farm in Central Illinois where she enjoyed learning about production agriculture from the cab of the combine alongside her father, noted a NACT news release. She was actively involved in her high school’s FFA chapter, successfully earning a state championship in the Vet Science and Agricultural Communications contest. McGreal also served on the FFA National Championship Agricultural Sales team.

Callie McClay, a junior at the University of Illinois studying agricultural communications with a concentration in advertising, was elected as NACT communications coordinator. She is also pursuing a double minor in food & environmental systems and food & ag business management. Having grown up on a farm, Callie has been interested in agriculture from the very beginning. She grew up showing cattle for 4-H and was involved in FFA through high school.

Congratulations to both young communicators! In this current political and social environment, the role of journalists in communicating with readers through a free and fair press hinges on young, talented individuals continuing to enter our field.

BLOOMINGTON — An innovative collaboration led by the Illinois Farm Bureau, which conducts nutrient recovery technology research on a reclaimed 13,500-acre property in Fulton County will continue thanks to a $1 million grant from the EPA. The grant will fund development of a bioreactor and treatment system to effectively capture nutrients from subsurface drainage water and recycle nutrient-captured biochars as a slow-release fertilizer, while keeping nutrients — or fertilizers — in a closed agricultural loop.

“This partnership brings together a powerful mix of collaborators that helps bridge the gap between rural and urban communities,” said Lauren Lurkins, IFB director of environmental policy. “The real strength here is that we have the whole spectrum — researchers, farmers and clean water professionals — working together to move the needle on the state’s Nutrient Loss Reduction Strategy.” Read more at http://www.ilfb.org/take-action/current-priorities/protecting-our-environment/rural-urban-partnerships/ (IFB news)

Illinois Farm Fact: The Illinois Nutrient Loss Reduction Strategy was established in 2015 to reduce total phosphorus (25 percent) and total nitrogen (15 percent) loads by 2025, with the long-term goal of a 45-percent reduction of the loss of these nutrients to the Mississippi River.