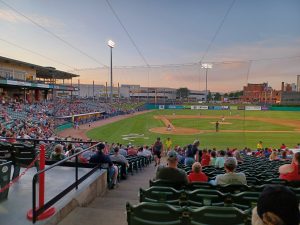 Dozer Park, home of the Peoria Chiefs, will host a group from the Farm Bureau on July 30. The day prior, a large contingent of Illinois soybean farmers will take over the Normal Cornbelters’ stadium for a ballgame and Summer of Soy event. (Photo by Tim Alexander)

With farmers’ focus on the weather and developing crops, we have a look at the latest drought areas in Illinois and how last week’s welcomed storms could affect them. We also have information about the new marketing director hired by the Illinois Soybean Association, and how you can join Illinois farmers for an upcoming night at the ballpark. Please read on …

URBANA — University of Illinois Agronomy Extension Specialist Emerson Nafziger noted last week that Illinois’ crop rating slipped a little more in the first week of July, with “good” and “excellent” ratings on July 3 at 65 percent for corn, down from 70 percent a week earlier. Soybeans, at 62 percent good or excellent, fell from 66 percent the week before. The U.S. drought map released on July 7 has 50 percent of Illinois rated as abnormally dry, 15 percent in moderate drought, and 3 percent in severe drought. Particularly affected by drought are Champaign, Douglas, and Piatt counties.

“The good news is that this area got some rain on July 7, and more might be coming on July 8,” Nafziger said on Thursday, July 7. “This should do a lot to restore growth rates and yield potential of corn, although it’s doubtful that fields where leaves have curled daily for the past three weeks will be able to recover to produce full kernel numbers.”

Four percent of the Illinois corn crop had pollinated by July 3, with most expected to pollinate over the next two weeks, according to Nafziger. “Fields planted after May 15 are behind in their development, and that may enable them to respond a little more to stress-relieving rain. As long as it doesn’t turn dry again, rain should restore soybean yield potential,” Nafziger noted in the U of I Extension’s weekly crop update for July 8.

However, significant rainfall events in consecutive weeks came at an ideal time in the northwest corner of the state, according to Phillip Alberti, commercial agriculture Extension educator for northern Illinois. “Coming out of a very dry June, the corn (V5-V7) and soybean (V4-R1) crops are in a much better place after the first week of July. Earlier planted crops do seem to have a sizable advantage compared to their later planted counterparts which struggled to weather the dry heat,” Alberti said. (Harbach, C. “Illinois Crops Update 7.8.22.” University of Illinois Extension)

BLOOMINGTON — Drought conditions were affecting a large, albeit scattered portion of the state of Illinois late last week, reported Daniel Grant of the Illinois Farm Bureau’s news service. All or parts of 27 Illinois counties — or more than one-fourth — are in moderate to severe drought, according to the latest U.S. Drought Monitor released July 7. That was up from 13 counties in moderate drought the previous week, Grant reported.

The driest conditions existed in eastern Illinois, where portions of six counties (Champaign, Douglas, Edgar, Moultrie, Piatt and Vermilion) were moved into the “severe drought” category as of July 5. Moderate drought conditions were also reported in Jo Daviess and Stephenson counties in the northwest, and Alexander and Pulaski in southern Illinois.

In addition, counties with at least portions in moderate drought as of July 5 were Grundy, Kendall, Will, Ford, Iroquois, Clark, Shelby, Macon, DeWitt, Logan, Wabash, White, Saline, Gallatin, Hardin, Pope and Massac. Large portions of the rest of the state are rated abnormally dry, according to the drought monitor.

“June is typically one of the wettest calendar months across Illinois, but this June was unusually dry,” said Trent Ford, state climatologist with the Illinois State Water Survey. “Total precipitation ranged from less than 1 inch in east central Illinois to just over 5 inches in northwest Illinois.”

BLOOMINGTON — Illinois’ 43,000 soybean growers will be well represented when it comes to future marketing endeavors under the soybean checkoff program. The Illinois Soybean Association is welcoming aboard as their new director of market development Todd Main,

who has more than 20 years of experience in leading initiatives to develop support for sustainable public policies.

Main’s resume reflects the work of a trusted policy adviser to leaders in business, nonprofits, governments, and foundations as well as candidates for public office including extended assignments in Washington D.C., the Great Lakes region and the Southwestern U.S. He served as a strategic advisor to top executives on environmental, transportation and renewable energy policy including the Governor of Illinois, state cabinet members and federal agency officials. Previously, Main served as chief of staff for the Illinois Department of Natural Resources with primary responsibility for agency operations.

“Todd has extensive experience in stakeholder engagement and managing coalitions, program planning, resource budgeting, and setting organizational goals,” says John Lumpe, ISA CEO. “His previous experience as the Transportation and Infrastructure Advisor to ISA means he has already developed relationships within our network of collaborators, and he is well-poised to grow those relationship investments into new marketplace opportunities for Illinois soy.” (ISA news)

Ag groups going out to the ballgame

BLOOMINGTON and PEORIA — Central Illinois farmers and others associated with agriculture will be present at two of the largest downstate baseball stadiums in Illinois later this month. On July 29, the Illinois Soybean Association is hosting a “Summer of Soy” at CornBelters Stadium in Normal. The event is designed to create greater understanding and appreciation for soy-based products, and the Illinois soybean farmers behind them, while providing summertime fun for community members across the state. The 5 p.m. game will feature the Rookie League Cornbelters taking on the Illinois Valley Pistol Shrimp. ISA members can contact the Bloomington office for details on how to get complimentary tickets.

The following night, July 30, the Class A Peoria Chiefs will battle Fort Wayne at 6:35 p.m. before a large contingent of Peoria County Farm Bureau members and families. The night at the ballpark will be filled with trivia, games, prizes and fireworks after the game. Farm Bureau members can buy specially priced reserved seating tickets for $7 per ticket directly from the PCFB, which is located at 1716 N. University in Peoria.

The latest research on crops, no-till and public agriculture will be highlighted during a July 28 Agronomy Field Day at Ewing Demonstration Center in Franklin County. (U of I Extension)