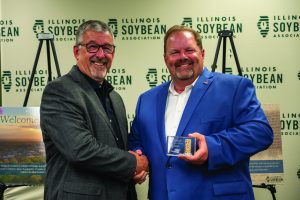 Illinois State Sen. Patrick Joyce (right) was one of two state lawmakers honored June 2 in Lombard by the Illinois Soybean Association for their contributions to the state’s agriculture industry. (ISA photo)

Illinois farmers are coming off a very wet spring that pushed planting dates back for many. We have a look at how this spring compares with other wet and gloomy spring times of the past. We also have a look at crop-planting progress and prices, and more. Please read on …

URBANA — Spring 2022 was wet, cold and gloomy, but was its impact on spring planting any more profound than during other recent, soggy springs? This issue was tackled by Illinois State Climatologist Trent Ford in a May 27 article, “Wet, Cold and Gloomy: Comparing Early Spring 2022” published by the University of Illinois farmdocDAILY website.

Fieldwork and planting complications in Illinois arose this year from a prolonged period of cool and cloudy weather with very frequent but small precipitation events,” according to Ford. “The period between late March and early May this year was not record-breaking in any way but had the right ingredients at the right time to significantly delay important spring work for farmers across Illinois much of the Midwest.”

“Outside of northern and southwest Illinois, spring precipitation so far this year has not been remarkable. Instead, the complications to fieldwork and planting this season came from the relatively high frequency of rainfall instead of the absolute total,” Ford reported.

“The frequent — albeit light — rain this spring across the state kept topsoils wet to excessively wet. Meanwhile, temperatures over this period were consistently 3 to 6 degrees below the 1991-2020 normal. The persistent cold in the first two-thirds of spring this year really sets 2022 apart from the other very wet springs of 2011 and 2019.”

SPRINGFIELD — Illinois State Climatologist Trent Ford concluded that the lack of excessively heavy rain this spring has not only reduced the risk of flooding for many, but also has allowed planting to proceed without notable delay now that the weather has moved into a warmer and drier pattern. This is supported by the May 31 USDA-National Agricultural Statistics Service Illinois Crop Progress and Condition report, which showed that 89 percent of corn had been planted statewide.

The percentage exceeds the five-year average of 84 percent planted by the first of June. So much corn has been planted that NASS has begun to rate corn condition, with 23 percent rated fair, 62 percent good and 12 percent excellent. The remaining 3 percent was rated poor or very poor.

Soybeans planted in Illinois reached 75 percent, also ahead of the normal 67 percent planted. Soybeans showing emergence were estimated at 52 percent, compared with the five-year average of 50 percent, winter wheat, at 91 percent headed, was on pace with historic averages and was rated 25 percent fair, 50 percent good and 10 percent excellent.

SPRINGFIELD — The USDA’s May 31 Illinois Agricultural Prices report showed a 5.1 percent increase in the April Prices Received Index (133.8) over the previous month, and a 28 percent leap over prices received one year ago. At 122.6, the Crop Production Index rose by 1.7 percent over March prices and 17 percent from the same time in 2021. The Livestock Production Index registered the greatest increase, bolting to 145.1, or an 8 percent increase over March and 40 percent increase over April 2021, according to the USDA report.

On June 1 the Federal Reserve Board released its May 2022 Beige Book update, which summarizes commentary on current economic conditions in each Federal Reserve District. The report included several observations pertaining to the U.S. agricultural economy and the seventh district, which includes Chicago.

LOMBARD — The Illinois Soybean Association opened its new office in Lombard with a soiree that included honoring a pair of Illinois lawmakers for their contributions to the state’s agriculture sector. During the June 2 gathering, ISA presented its Legislative Champion Awards to Illinois State Senator Patrick Joyce and Illinois State Representative Eva-Dina Delgado. The state lawmakers were recognized for going above and beyond in their advocacy efforts for Illinois soybean farmers, especially their efforts sponsoring and passing B20 legislation in this unique legislative session.

According to an ISA news release, the legislation transitioned the sales tax exemption from 10 percent biodiesel blends to 19 percent, which will not only significantly enhance the environmental benefits of biodiesel, but also lead to strengthened demand for the Illinois-grown renewable fuel by about 125 million gallons. Joyce and Delgado’s efforts were pivotal to the success of the legislation.

The Lombard office replaces the recently shuttered ISA office in downtown Chicago. “The Lombard Office, selected for better accessibility to Chicagoland legislators, was chosen to continue our policy efforts just like this new B20 legislation,” said ISA Chairman Steve Pitstick. “This new location sets us up well to enact the change that Illinois farmers want and need.”

Effective Wednesday, June 1 bird lovers could resume using backyard feeders and baths. A suspension of backyard bird feeding had been imposed by the Illinois Department of Agriculture to restrict the spread of highly pathogenic avian influenza. (Illinois e-News release)