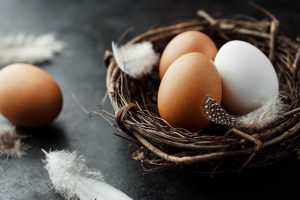 Egg prices are up more than 170 percent in some areas due to the recent outbreak of highly pathogenic avian influenza affecting wild and commercial poultry flocks.

In this week’s farm and rural news digest, we will catch up on the latest legislative and regulatory matters affecting agriculture, and delve into the latest USDA Prospective Plantings report for Illinois and the U.S. Please read on…

BLOOMINGTON — An Illinois state budget request of $750,000 for the Department of Agriculture to hire additional field veterinarians has been granted through Gov. J.B. Pritzker’s $46 billion FY2023 budget, which was approved by the Illinois General Assembly last week. The request, which was granted just as a wave of highly pathogenic avian influenza is threatening the nation’s poultry producers and driving up prices for eggs, was championed by leadership from Illinois’ pork, beef, corn and soybean commodity groups, along with the Illinois Farm Bureau.

“With the recent announcement by the United States Department of Agriculture’s Animal and Plant Health Inspection Service confirming the presence of highly pathogenic avian influenza in a small backyard flock in Mclean County, the need for these funds is immediate,” said Illinois Pork Producer Association executive director, Jennifer Tirey. “This recent outbreak proves that a foreign animal disease does not discriminate based on the size of a livestock farm. The devastation could impact the smallest backyard hobby farms, farmers that sell their product at a farmers’ market, small meat processors or our larger producers. We’re also concerned about the potential of an African Swine Fever outbreak in Illinois swine herds. The impact of any of these animal disease outbreaks to Illinois agriculture would be detrimental and being underprepared would only worsen the impact.”

According to the Chicago Mercantile Exchange’s Daily Livestock Report, a significant drop in production along with strong demand recently pushed wholesale table egg prices to more than $3 per dozen, more than 170 percent higher than a year ago. Nationwide, at least 11 million layers have been lost to the current wave of HPAI. Analysts predict total losses could reach 18 million birds, or 5.5 percent of the national layer stock. (IPPA, IFB news)

SPRINGFIELD — The Illinois Department of Agriculture announced last week that it has filed emergency rules prohibiting the sale or exhibiting of poultry and poultry products at swap meets, exhibitions, flea markets, and auction markets in Illinois to prevent the spread of avian influenza — meaning that as of now, there will be no poultry shown at FFA or 4-H competitions this summer.

The emergency rules, effective immediately, may stay in place for up to 150 days. After 45 days, the Department will reevaluate the threat and may choose to repeal the emergency rules. The Department will continue to evaluate the HPAI threat in 45-day increments for up to 150 days and could choose to extend the ban. However, Illinois State Veterinarian Mark Ernst is hopeful that the number of HPAI cases in Illinois flocks will decrease in time.

“We are optimistic that as the migratory bird season comes to an end, we will see a decrease in exposure for our flocks here in Illinois and our neighboring states and be able to resume our poultry exhibitions and sales. Until that time, it is essential that we take every step possible to protect poultry flocks in Illinois,” Ernst said in an Illinois e-News release.

Ernst said that flock owners, managers or veterinarians should report any unusual findings in domestic poultry such as an increase in mortality, decrease in water consumption, decrease in egg production, or respiratory signs including coughing and sneezing immediately to the IDOA at 217-782-4944, or the USDA at 866-536-7593.

BLOOMINGTON — When USDA released its April 2022 Prospective Plantings report, it estimated that U.S. farmers intend to plant 89.5 million acres of corn, a decrease of about 4.2 percent from 2021. Conversely, a 4.4 percent increase in soybean acreage is anticipated.

“There’s an implied shift away from corn acres to soybean acres,” according to American Farm Bureau Federation Economist Shelby Myers. The reason? Higher input costs associated with growing corn. In October 2021, University of Illinois economists estimated nonland costs for high-productivity farmland in central Illinois for 2022 at $677 per acre for corn and $413 per acre for soybeans — long before Russia’s invasion of Ukraine caused anhydrous ammonia prices to skyrocket. According to Farm Journal, 2022 will be only the third year in U.S. history in which soybean acres have surpassed those of corn, and the first time since 2008-2009 that input costs have had such a significant impact on acreage allocations.

SPRINGFIELD — Consumers should find meat, poultry and dairy products easier to find thanks to state legislation passed by the Illinois General Assembly and currently on the desk of Illinois Gov. J.B. Pritzker. The Farmers Market Permit Act (SB 3838) will create a new, scale appropriate Farmer’s Market Permit to govern the sale of meat, eggs, and dairy by farmers at farmers markets, clearly delineating farmers from restaurants and retailers. The act will also standardize the regulations and permitting requirements across counties, and cap fees for the permit at $75 for farmers that only sell eggs, and $175 for farmers that sell any combination of meat, eggs, and dairy, ensuring that it is economical for farmers to vend in multiple countries. Previously, farmers faced multiple, varying permit fees to sell their products in more than one county.

“This new legislation will support the livelihood of small farmers, improve farmers markets, and make it easier for Illinois shoppers to buy local meat, eggs, and dairy products,” says Molly Pickering, Deputy Director of Illinois Stewardship Alliance. “Looking at the big picture, Illinois imports an estimated 95 percent of the food consumed in our state. All that money goes out of state instead of supporting small farms and building local economies here in our hometowns. We see the Farmer Market Permit Act as one step towards helping Illinois farmers feed Illinois, making our communities more self-sustaining and resilient, and ultimately improving the health and wealth of the people in our state.” (ISA news)

Once signed by the governor, the Farmer’s Market Permit Act will go into effect on Jan. 1, 2023. (Illinois Stewardship Alliance)