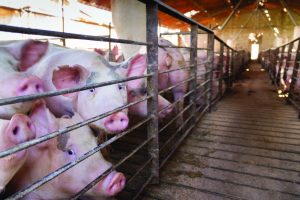 California’s Proposition 12 prohibits the sale of pork from hogs whose mothers were raised in pens that do not comply with the state’s housing standards.

In this week’s farm and rural news report we have progress on the fight to repeal California’s controversial Proposition 12, an update on global climate change and good news for the Illinois biodiesel industry and soybean growers. Please read on …

SPRINGFIELD — Illinois Pork is celebrating the U.S. Supreme Court’s decision to hear a case brought by the National Pork Producers Council and the American Farm Bureau Federation against California’s Proposition 12, which bans the sale of pork from hogs born to sows that weren’t raised according to the state’s production standards.

Proposition 12 prohibits the sale of pork from hogs whose mothers were raised in pens that do not comply with the state’s housing standards. It applies to any uncooked pork sold in the state, whether produced there or outside its borders. According to the pork producers, nearly all pork currently produced in the United States fails to meet California’s new standards, which were to take effect Jan. 1. (Business groups in California recently got a state superior court to delay the effective date of Proposition 12 for 180 days after final implementing regulations are issued.)

“Illinois pork producers are very pleased that the Supreme Court granted the industry’s petition to hear our challenge of Proposition 12, which imposes regulations on pork production outside of California,” said Thomas Titus, IPPA President. “Once the court hears the pork industry’s arguments hopefully later this fall, we’re confident it will find that Prop. 12 violates the Constitution’s Commerce Clause, which limits states’ ability to regulate commerce outside their borders. The Illinois Pork Producers Association has stood strongly behind NPPC’s efforts to preserve the rights of America’s pork producers’ freedom to operate that lets us continue selling pork to consumers everywhere.”

U of I prof: Climate change driving crop genetics

URBANA — University of Illinois agriculture and consumer economics professor emeritus Gerald C. Nelson recently contributed research to the Intergovernmental Panel on Climate Change report, which painted a dire picture for the future of crop production if changes aren’t forthcoming in the amount of carbon released into the atmosphere. We had a chance to speak to Nelson recently about whether crop production may shift geographically to adapt to rising temperatures.

“A quick answer is that all plants originally evolved in one place and for the climate (and other conditions at that location and time. The climate change we’re experiencing today is a relatively recent phenomenon, caused by humans putting a lot of CO2 into the air from fossil fuels, since the industrial revolution,” said Nelson, in an email. “Plant evolution, as in changes in its characteristics based on genetic changes, are driven by random mutations that gave the plant some advantage in that location. But this tends to be a longer process. There are definitely plant genetic changes, but made by humans to deal with a variety of issues, one of which is changes in climate. Corn originally evolved in Central America (roughly speaking). At some point several 1,000 years ago, its predecessor, called teosinte, developed bigger seeds and a stalk that supported more weight. Humans then found that those new seeds made for good human food and did some guided natural selection, choosing the plants that had the best characteristics for their needs and using their seeds to grow more.

Nelson concluded that this process has occurred for all the major food grains — corn, rice and wheat are probably the most genetically manipulated food crops. “But most of what we eat has seen a similar process. A fascinating story is the development of various citrus crops, over space and time. As our understanding of how genetics works, including hybrid vigor (a natural phenomenon) and the use of techniques to manipulate the genetic composition directly, we have moved some plants along very quickly to better meet local growing conditions. For the most part climate change has not been a major driver of these changes in the recent past, because we haven’t had much yet. That’s likely to change, particularly with higher temperatures coming. Like all living organisms, plants are based on chemistry and chemistry is driven by temperatures.

“You can avoid some temperature increases by shifting a crop away from the equator or higher in elevation. One example of that is the expansion of corn production in the northern tier states and in Canada. But we will eventually run out of cooler places to shift to. A coming major climate change related challenge for plant (and animal) breeders is how to develop varieties that can perform at higher temperatures. At some point though we may run out of our ability to deal with ways to deal with higher temperatures.”

BLOOMINGTON — The Illinois Soybean Growers are celebrating the passage of the organization’s B20 Legislation, sponsored by State Sen. Patrick Joyce, D-Essex. The legislation, which raises the tax incentive for biodiesel, passed with strong bipartisan support from every region of Illinois and now moves to the Illinois House of Representatives, where State Rep. Eva Dina Delgado, D-Chicago, will be the lead sponsor.

“This hard-won victory is the result of ISG’s tireless advocacy, and the support of sponsor Sen. Patrick Joyce who is working to present a viable and immediate solution to combat climate change from carbon emissions in the transportation sector,” said ISA Chairman, Steve Pitstick. “This legislative initiative will transition the sales tax incentive from 10 percent biodiesel blends to 19 percent, which will not only significantly enhance the environmental benefits of biodiesel, but also lead to strengthened demand for this homegrown, renewable fuel by about 125 million gallons.”

According to the ISG, biodiesel reduces lifecycle greenhouse gas emissions by up to 86 percent, and once the bill is fully implemented it is expected to reduce GHG emissions by nearly 200,000 tons.

“Illinois farmers lead the nation in soybean production, and our agricultural community is the largest economic driver in the state. This critical legislation will further fuel Illinois’ economy, will improve our environment, and will keep the Illinois soybean market firing on all cylinders,” said Pitstick.

Illinois’ commitment to the biodiesel industry has created more than 7,500 clean energy jobs in Illinois and has generated $1.6 billion in household income to families across Illinois. (Illinois Soybean Growers)