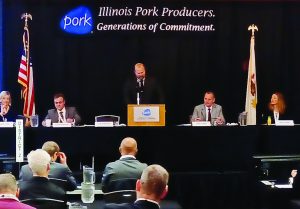 In this week’s peek between the rows we devote our entire column to news from the 2022 Illinois Pork Producers Association annual meeting, held Feb. 22 in Springfield. We have all the election results, appointments and transitions — see if you recognize anyone, farmers …

Elkhart pig farmer Thomas Titus was elected to serve as president of the Illinois Pork Producers Association during their annual meeting, which kicked off the 2022 Illinois Pork Expo. Titus was raised on a grain and livestock farm in East Central Illinois prior to attending the University of Illinois and attaining a degree in Agricultural Education. Following graduation, Titus partnered with a company that focused upon employee development before working for Cargill’s Pork Business Unit in Wichita, Kansas for six years.

“The opportunities that this organization presents have always been something that I have looked forward to being a greater part of. IPPA has been an integral part of all sides of my family for decades and am honored to be able to carry on the ‘Generations of Commitment’ to the organization that has provided us so many opportunities,” Titus said in his acceptance message. “Although 2021 posed a unique set of challenges from feed input costs, labor issues, legislative, regulatory and the ever-mounting concern of an FAD (foreign animal disease), IPPA has poised itself to be prepared to help its members through these challenges.”

In addition to electing Titus president for the next year, IPPA delegates also voted in president-elect Chad Leman of Eureka, vice president-treasurer Cheryl Walsh of Princeville, and secretary Matt Frizzo of Gillespie.

Illinois Pork recognized the Stitzel Family, from Shannon (Carroll County), as the IPPA Family of the Year. Darrell Stitzel and his wife Laurie own Stitzel Hog Farm and farm 450 acres of corn in addition to operating their 10,000 head wean-to finish hog farm. Darrell’s grandparents raised beef cattle and hogs on the farm before his parents, Dan and Paulette, took the operation over in the mid-1960s. The family built their first hog barn in 1972.

Darrell’s parents turned the day-to-day operations over to him over a decade ago, and today with the help of his cousin, Nathan Kluck, they manage the farming operation. Later, he was encouraged to become involved in the organizational side of the industry and followed in his father’s footsteps by serving on the Carroll County Pork Producer board. In 2001, he was elected to serve on the IPPA Board of Directors and served as president in 2005.

“The Stitzel family, for multi-generations, have always provided the best of care for both their livestock and their community,” stated Brent and Kathy Scholl, Family of the Year Award nominators. “They have always been willing to help promote pork, serve on boards, care for their animals, and give good advice to those wanting their help. Darrell has served at the local level and state level, and both Darrell and Laurie have helped at the national pork events.”

Darrell Stitzel currently serves as the Cherry Grove Shannon Township Supervisor after recently stepping down from the Carroll County Board after 10 years. Laurie recently retired from working at Headquarters, a beauty shop that she owned and operated in downtown Shannon for over 30 years, according to an IPPA news release.

During their annual meeting the IPPA elected their newest at-large director, Kent Blunier, who with his wife Jarrin and son Reed live in Forrest. Blunier is the owner and daily operations manager of Blunier Farms Kent and has been very involved in the pork industry over the years attending district meetings, serving as a pork delegate and working at the Pork Patio during the Illinois State Fair. He has also been active at the county level, serving as president of the Livingston County Corn Growers and as an active member of the Livingston County Farm Bureau. He is a proud FFA alumni and a member of the Pontiac Bible Church.

Other members voted to serve as directors were Tom Wilkey of Fairbury, Josh Maschhoff, Thomas Titus of Elkhart, Matt Frizzo of Gillespie and Dale Weitekamp of Raymond.

Retired directors were honored, including Carrie Pollard, who served from 2016-21 and 2010-12. Pollard works as the Technical Services Manager for Pipestone Veterinary Services.

Also retiring is Mike Woltmann, who served from 2013-21. He also served as District 2 director on the IPPA board for nine years, in addition to the marketing and Pork PAC committees. He was the chair of the Production Tech-Industry Services committee for two years.

The IPPA board consists of six district representatives, twelve at-large positions and representatives from the following organizations: Illinois Farm Bureau, Illinois Purebred Swine Council, National Pork Board and National Pork Producers Council. The board meets quarterly to discuss the promotion of pork products and how to meet the needs of pig farmers across the state.

Annie Johnson, a freshman at the University of Wisconsin-Platteville majoring in agriculture education, was selected as the next Illinois Pork Ambassador by the IPPA Board of Directors. Involved with swine production in her home county by raising purebred Durocs, Johnson won a state Supervised Agricultural Experience through FFA in Swine Production Entrepreneurship. As a Henry County Pork Ambassador, Johnson had the opportunity to get to know more about local agriculture. In a news release, she said she is very excited for the opportunity to be the 2022 Illinois Pork Ambassador.

“I am looking forward to learning more about Illinois pork production and proudly representing the Illinois Pork Producers Association,” said Johnson, who will hold the title of ambassador through the 2023 IL Pork Expo and will intern in the IPPA office this coming summer. She will also travel throughout the state to Summer Agriculture Institutes and will manage the “Piglets on Parade” Birthing Center at the Illinois State Fair. “IPPA is very fortunate to have such a leader in this position,” said Jennifer Tirey, Executive Director for IPPA. “We are looking forward to having Annie in our office and sharing experiences in the pork industry.”

The newest goal of the Illinois Pork Producers Association’s Pork Power! program is to surpass 1 million pounds of donated pork before the end of 2022. To help the cause, order one of the new Pork Power! T-shirts online at https://ilpork.site-ym.com/store/ListProducts.aspx?catid=302327. Cost: $20.