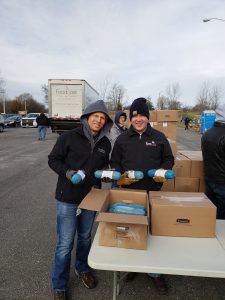 The Illinois livestock industry is closely watching the progress of state Senate Bill 3429, which pertains to the use of antibiotics in food-producing animals; the bill was under consideration the final week of the 2018 legislative season. Also of interest: there is only one more scheduled opportunity for farmers who wish to apply their own dicamba herbicide in 2019 to become classroom certified. We have an update on that issue, along with some uplifting news about the generosity of the Illinois ag sector during this holiday season. Please read on …

SPRINGFIELD — It’s a movement that is gaining momentum: since around 2015, states are taking the lead in creating legislation limiting how and when a food-producing animal can be administered antibiotics. In each case, the rules are more stringent than current federal requirements. In Illinois, state agriculture and livestock leaders are closely watching the progress of State Sen. Daniel Biss’ (D-Skokie) Senate Bill 3429, which was the subject of a hearing in front of the Illinois Senate Agriculture and Public Health committees during the final day of the fall veto session.

The proposal would require that a licensed veterinarian prescribe antibiotics to animals only after visiting the farm where the animal is located, among other conditions. But the proposed state legislation would be unnecessarily duplicative, ineffective and non-beneficial, according to veterinarians who testified in front of the committees on Nov. 28. Dr. Robert Ebbesmeyer told the committees that antibiotic use in livestock had already decreased before the most recent FDA rules were installed, and took exception to proponents of the legislation who characterized producers use of antibiotics as “willy-nilly,” the Illinois Farm Bureau news service reported.

In comments written for the committees, IFB associate director of state legislation Bill Bodine said the farm bureau supports the “judicious use of antibiotics to ensure food is safe while protecting medically important antibiotics. We understand that antibiotic resistance is an important health issue, as are safe food and animal care. The responsible use of antibiotics in livestock production ensures healthy animals, safe food, and protects antibiotics for human use. Illinois farmers are committed to the care of their animals and the proper use of antibiotics.”

BLOOMINGTON — After two quickly arranged training sessions in Springfield (Nov. 29) and Utica (Dec. 4), only one more announced opportunity remains for farmers who are certified private applicators and who intend to apply dicamba herbicides to soybeans in 2019 to obtain newly-required training certification. The third and final training session announced by the Illinois Fertilizer and Chemical Association and Illinois Department of Agriculture will be held Dec. 11 at Hawthorn Suites in Champaign from 3-4:30 p.m. The training program utilizes training materials provided by dicamba registrants Monsanto, BASF or DuPont, in conjunction with the IDOA, agribusinesses and farm organizations.

The limited number of farmer-based dicamba training opportunities this winter compared to last can be traced to the late, October 31 U.S. EPA decision to allow the continued use of dicamba herbicides on soybeans through 2020, and the later issuance of a new label defining new restrictions and conditions on use of the product. Though online training was still not available at press time, training is expected to be offered online for farmers from the product registrants very soon, according to the IFCA. For more information about farmer-based dicamba training opportunities, contact the IFCA at 309-827-2774; the association hopes to announce additional dates for its dicamba training schedule soon.

Meanwhile, the University of Illinois Extension and IDOA have announced a 14-date series of applicator certification training for private pesticide applicators around the state. That series begins Dec. 11 in Champaign and concludes March 26 in Moline. For more details on the training sessions for private applicators, call the U of I at 877-626-1650.

Since its inception in 2008, Pork Power has generated over 625,000 pounds of pork — enough for 2.4 million meals — for families throughout Illinois. (IPPA)

To commemorate the state’s bicentennial, PCFB members donated trees to Peoria County elementary schools participating in the farm bureau’s Ag in the Classroom program. More than two-dozen trees were delivered to area schools such as Kellar Primary School in Peoria, where a ceremonial tree-planting was held as an educational event.

Also in Peoria County, the farm bureau recognized its annual Ag Service Award and Voluntary Emergency Service Award winners. Richard Carroll, who currently serves as PCFB president after many years serving on committees and in other leadership roles, was named 2018 PCFB Ag Service Award winner. Al Petlach, Dunlap Fire Protection District volunteer, was the recipient of the PCFB Volunteer Emergency Service Provider. Both were recognized at the 106th annual meeting of the PCFB in November.

CHESTER — The Pork Power: Partnering to Fight Hunger in Illinois campaign, sponsored by Illinois pork, soybean and corn marketing associations, is in its 10th year — and the sluggish farm economy seems to have done nothing to impugn the forward progress of the program. In late November, Pork Power representatives presented the St. Louis Area Foodbank with 6,000 pounds of ground pork. And, as of press time, the Illinois Pork Power program — in conjunction with corporate sponsors — was expected to donate an incredible 90,000 pounds of pork products to the Greater Chicago Food Depository on Dec. 3.

“As farmers, we want to feed our communities, including those in need,” said Daryl Cates, Illinois Soybean Association board member. “Pork Power offers a practical opportunity for soybean producers to do just that.” (Illinois Pork Producers Association news)