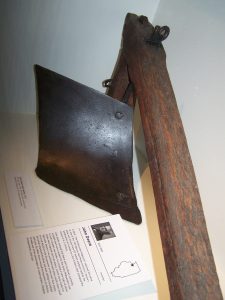 John Deere’s original, handmade “plow that broke the prairie,” circa 1837, is now on display as part of the Celebrate Illinois exhibit at the Peoria Riverfront Museum through June 3. Deere crafted his “self-scouring” steel-blade plow in Grand Detour, Illinois. (Tim Alexander photo)

Ag Secretary Sonny Perdue said last week that rural Americans can expect major benefits from President Trump’s infrastructure plan; we have highlights of his remarks. Also this week: info on how to acquire a new resource guide designed to help livestock producers comply with strict regulations, along with news of a historic ag-related exhibit currently at the Peoria Riverfront Museum. For these timely rural news items and more, please read on …

WASHINGTON, D.C. — U.S. Agriculture Secretary Sonny Perdue stated in an op-ed to the Des Moines Register dated Feb. 18 that rural America will see major benefits from President Donald Trump’s proposed infrastructure rehabilitation plan. “Under President Trump’s ‘Building a Stronger America’ infrastructure agenda, we can restore our position in the world and steer America back to prosperity, particularly in rural America,” Perdue stated in the op-ed, which was later circulated by the United States Department of Agriculture (USDA) in a national press release. “Importantly, President Trump committed $50 billion, or a quarter of all newly announced federal funding, solely to modernizing an repairing vital infrastructure in rural America.”

Perdue noted that during his nine months as Ag Secretary, rural citizens in the 33 states he has visited have indicated a need to expand broadband access, rebuild aging roads and bridges, provide clean water and supply affordable, reliable power. “Specifically, I heard from people in agricultural communities who could use better transportation for moving American farmers and ranchers’ amazing bounty and enhancing access to their suppliers and customers, both domestically and internationally,” he said. “Only with reliable and efficient infrastructure can rural America’s bounty be brought to market at home and abroad.”

Trump is seeking at least $1.5 trillion in infrastructure investment nationwide through public-private partnership efforts that would be spurred by $200 billion in new federal funding.

SPRINGFIELD — The Illinois Beef Expo concluded its five-day run in Springfield on Feb. 25, wrapping up multiple sales, a junior show for Illinois exhibitors and a large industry trade show. One of the premier cattle events of the Midwest, the expo also served as an opportunity for Illinois producers to pick up a new resource guide to help clarify environmental regulations and improve the environmental profile of their operations. The free guide, which is available in swine, beef and dairy versions, simplifies EPA regulations “in farmer language” and identifies best management practices for producers, according to Joni Bucher, Illinois Beef Association (IBA) president from Good Hope.

“All beef producers regardless of their size have an obligation to optimize their environmental performance and this resource guide can help achieve that,” Bucher said in an IBA news release.

Illinois Beef Expo attendees picked up their free resource guides at the IBA booth in Building 110 at the Illinois State Fairgrounds last week. Those who didn’t attend can still get one, said Tim Maiers of Maiers Ag Consulting and the Illinois Livestock Development Group. “Guides are still available after the expo for your readers,” Maiers said. “Just call the IBA office at (217) 787-4280 to request them.”

After inventing his steel-blade plow in Grand Detour, John Deere moved his business and family to Moline and the banks of the Mississippi River in 1848. (John Deere Company website)

SPRINGFIELD — In other news important to Illinois livestock producers, manure application “refresher” courses are being offered at four locations in March courtesy the Illinois Pork Producers Association, University of Illinois Extension and Illinois Farm Bureau. The sponsors say that whether you are a farmer, custom applicator or technical service provider, these workshops are designed for you.

Guest speakers for the events are Ted Funk of the IPPA, Dave Ginder with the Illinois Environmental Protection Agency and speakers to be announced from the USDA-Natural Resources Conservation Service. Meetings will be held from 11am to 1:30 pm, with lunch provided, on March 8 (Mahomet, Farm Credit Illinois), March 15 (Mount Vernon, Farm Credit Illinois), March 20 (Monmouth, Compeer Financial) and April 3 (Sycamore, DeKalb County Farm Bureau). Call Ted Funk with questions at (217) 369-7716.

Ag history on display in Peoria

PEORIA — John Deere’s original, hand-crafted “plow that broke the prairie” is one of many ag-related historic objects currently on display at the Peoria Riverfront Museum as part of its “Celebrate Illinois: 200 Years in the Land of Lincoln” exhibition. Deere’s plow, invented in 1837 in Grand Detour for breaking the sticky prairie soils, is displayed (behind glass) near other Illinois agriculture historical displays, including a salesman’s scale model of Cyrus McCormick’s prototype reaper and an original ear of hybrid corn grown by the pioneering Funk family of Funks Grove.

“Celebrate Illinois is curated around the concept that objects tell stories and behind each object is a person, and that person has a unique story to tell — a personal insight into the history of Illinois,” says John Morris, CEO of the Peoria Riverfront Museum. The exhibit concludes June 3.