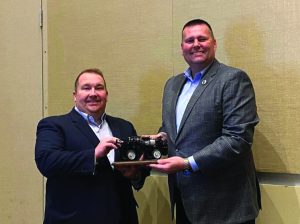 It’s official: Illinois was once again the national leader in soybean production and yield in 2021, and we have the details. Also in the news: Ag leaders are pleased that a crucial lock and dam on the Mississippi River will receive construction funding, and we have the numbers from USDA’s report on average 2021 precipitation and temperatures in Illinois. Please read on …

BLOOMINGTON — The Illinois Soybean Association is rejoicing over the news that Illinois has once again been recognized as the top soybean producing state. Despite challenges that resulted in delayed harvests for many farmers, Illinois’ 2021 soybean production reached 672.6 million bushels on 10.51 million acres of harvested land. Illinois soybean yield was estimated at 64 bushels per acre, up four bushels from 2020, according to the USDA National Agricultural Statistics Service.

“Even with the challenges presented by supply chain delays and interruptions, the economy and the weather, Illinois soybean farmers were able to do what they do best: produce a high-quality product abundantly and efficiently,” said ISA chairman Steve Pitstick, in a news release. “Illinois farmers have gotten really good at making the best of whatever growing challenges confront them, making smart management decisions, and maximizing production opportunities.”

Pitstick also credited ISA’s checkoff funded research and educational opportunities delivered to Illinois farmers for another solid production year and consistently profitable growing seasons in Illinois. “This announcement is more than a newsworthy headline, it represents the lineage, hard work and contributions of 43,000 farmers and families. This celebration belongs to every soy grower across the state of Illinois,” Pitstick said.

“It’s a privilege to advocate for our farmers and farm families at the state level,” said Bennett, a member of the Senate Agriculture Committee. “I would like to express my appreciation for this award in recognition of the work we’ve been able to accomplish for the agriculture industry.

In 2021, Bennett sponsored a law that allows agricultural sciences and agricultural education to count as requirements for university admission. He has also championed bills that incentivize agricultural educators to work in Illinois schools and commit extra funding to telemedicine options for rural Illinois residents.

BLOOMINGTON — The Illinois Soybean Association and Soy Transportation Coalition are celebrating the U.S. Army Corps of Engineers announcement that it will dedicate $732 million to complete the design and construction of Lock and Dam 25, located 45 miles north of St. Louis on the Mississippi River. The funding — part of the Infrastructure, Investment and Jobs Act — will expand the current 600-foot-by-110-foot lock chamber to 1,200 feet in length, which will enable a typical 15-barge tow to transit the lock in a single pass. This will lower transportation hours — and costs — for midwestern grain and oilseed crops destined for export markets.

“Lock and Dam 25 was opened in 1939 and is the most southern lock and dam on the Mississippi River with a single, 600-foot-by-110-foot lock chamber. Most every bushel of soybeans, corn, and other grain transported along the Mississippi River from the states of Illinois, Iowa, Minnesota, Missouri, and Wisconsin will pass through Lock and Dam No. 25 en route to export facilities near the Gulf of Mexico,” reported Mike Steenhoek, STC executive director.

Andrew Larson, ISA director of market development, called the announcement an “enormous win” for the transportation of Illinois soybeans. “The Lock 25 project is the right first step towards bringing these much-needed improvements to other locks in the NESP plan including LaGrange lock and dam, which is the next project to be authorized. We are grateful for the dedicated efforts of Congresswoman Bustos, senators Durbin and Duckworth, and other legislative advocates who worked to see this project into fruition.”

SPRINGFIELD — Illinois was slightly warmer and drier in 2021 compared to 2020, but above the historical average in both categories. This is according to the USDA-NASS Annual Weather Summary — Illinois 2021 report, issued last week.

A typical 15-barge tow can transport more than 800,000 bushels of corn or soybeans. (Soy Transportation Coalition)