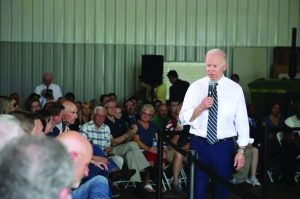 Illinois farmer Jeff O’Connor hosted President Joe Biden and Ag Secretary Tom Vilsack at his farm last week, and we’ll tell you what was discussed. Also, in farm and rural news this week: farmers should be on the lookout for “soil crusting,” and will soon have an opportunity to dispose of unwanted agrichemicals legally and safely. For more info, please read on …

KANKAKEE — President Joe Biden and USDA Secretary Tom Vilsack visited the north-central Illinois farm of Jeff O’Connor to announce that the government would double its funding to produce domestic fertilizer, to a total of $50 million. The USDA will make the funding available through a new grant program to support independent, innovative, and sustainable American fertilizer production to supply farmers, according to the Illinois Fertilizer and Chemical Association.

Along with Illinois Farm Bureau President Rich Guebert Jr. and leaders from the Illinois Soybean Association, Illinois Corn and a few elected representatives, IFCA President Kevin “KJ” Johnson met with Biden at the Kankakee-area farm. He expressed concerns to Biden and administration officials as to how crucial the ag input industry is to American agriculture, and how ag retailers and fertilizer manufacturers are “on the front lines” of alleviating food insecurity via the products they sell, according to Johnson.

The president also discussed growing concerns regarding crop production, inflation and market restrictions. Biden announced that his administration will seek to greatly expand the U.S. counties in which farmers are eligible to purchase “double-crop” insurance. This will cut risks associated with year-round crop production — usually soybeans and wheat — while increasing food production.

“ISA applauds the efforts being made by this administration, specifically by Secretary Vilsack and USDA staff for reaching out to farmers across the country to hear what tools they need to increase double crop soybeans and wheat,” said Steve Pitstick, ISA board chairman. “ISA encourages USDA to continue their aggressive outreach and collaboration to find double crop solutions that make an impact at the farm level and globally.”

Weather effects on crops could include ‘soil crusting’

URBANA — University of Illinois Dept. of Crop Sciences professor emeritus Emerson Nafziger is cautioning farmers to be on the watch for soil crusting, a result of soil and weather conditions that causes soil crusts to “bake” in time to interfere with crop emergence. Nafziger issued the advisory after temperatures soared into the 80s and low 90s across much of the state last week, following an extended period of above-average moisture capped with frequent rain events in April.

“Warm temperatures act to both push the pace of germination and emergence, and, along with sunshine and wind, to cause soil crusts to “bake” quickly. This won’t happen in all planted fields, but the potential is greater than usual over the next week,” Nafziger said in his May 6 article, On the Watch for Soil Crusting published by the U of I. “This is a bigger issue for soybeans than for corn, because their relatively large cotyledons can get trapped in a soil crust, which can cause the plant not to emerge. The key will be to examine fields daily after the first plants emerge, and to judge the pace of emergence over several days.”

If soil crusting becomes too severe, soybean plants may not emerge at all. Rain may not be in time to preserve fragile cotyledons, so farmers might be better off “repair-planting” soybeans if time permits. Corn planted deeper than two inches will usually breach soil crusting, though often not without quality and yield deficits, according to Nafziger. “A rotary hoe will sometimes help more corn seedlings emerge. Without cotyledons to move through the soil or hypocotyl to break, corn seedlings can wait a little longer for rain to soften the crust to improve emergence,” he said.

SPRINGFIELD — A subtle clue that Illinois farmers, businesses and municipalities are cleaning up their acts when it comes to water pollution, the Illinois Deptartment of Public Health announced last week updated consumption advisories for sportfish caught in Illinois waters. In line with the statewide trend of declining polychlorinated biphenyl levels, no new PCB advisories were issued and existing PCB advisories were relaxed for two waters — Horseshoe Lake (catfish) and Waukegan North Harbor and removed from three others  — Horseshoe Lake (common carp), Raccoon Lake, and Wabash River.

Though a statewide methylmercury advisory remains in place for all Illinois waters, it was less than a year ago when consumers were strongly cautioned against consuming sportfish caught in the Illinois River and other state waterways The current advisory cautions sensitive populations to eat no more than one meal per week of predatory fish (unless more restrictive site-specific advisories are in place due to elevated methylmercury levels).

SPRINGFIELD — As much as farm inputs cost these days it’s tempting to save partial or unused agrichemical containers. For farmers that would just as soon be safely and legally shed of them, the Illinois Department of Agriculture has scheduled a series of container recycling events across central Illinois. The IDOA’s “Clean Sweep” collection has been scheduled for late summer for Fulton, Henderson, Knox, Marshall, Mercer, Peoria, Putnam, Stark, Warren, and Woodford counties, the Department announced today. The collection, which rotates among Illinois counties, is open to farmers, retired farmers, nursery owners, private pesticide applicators, structural pest control applicators and landowners who inherited unwanted agricultural pesticides with their property.

Participants must pre-register the products they plan to dispose of by calling the IDOA Pesticide Hotline at 1-800-641-3934, online at https://www2.illinois.gov/sites/agr/Pesticides/Pages/Pesticide-Clean-Sweep-Program.aspx.

The Illinois Department of Agriculture’s “Clean Sweep” program, launched in 1992, has held 52 collection events through the state and collected 626,669 pounds of material from 2,196 participants. (IDOA)