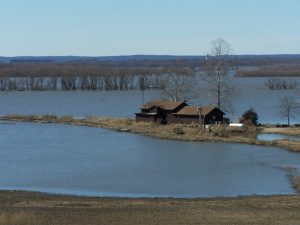 A force majeure restricting barge traffic on the Illinois River was recently lifted by the Coast Guard. Flooding affected river towns with banks overflowing near Lacon (pictured) and other areas in early March. (Tim Alexander photo)

A column that is usually devoted to Illinois-exclusive farm and rural news takes a decidedly national slant this week with news that affects all rural Illinoisans. Included are news summaries of proposed caps on biofuels, rural infrastructure proposals, vehicle ELD mandates and more.

BLOOMINGTON — Illinois soybean and corn growers are voicing their concerns about what they are identifying as President Donald Trump’s intention to approve plans to cap the prices of renewable identification numbers within the federal renewable fuel standard. The proposal, made by oil-state senators including Republican Sen. Ted Cruz of Texas, would essentially gut the RFS and drive down corn and soybean prices, according to the Illinois Soybean Growers and Illinois Corn Growers Association. The proposal has received the approval of high-profile legislators and the president himself in White House briefings, according to several news sources.

“Should the Trump Administration’s proposed caps on biofuels come to fruition, the ag economy will be severely impacted and the fiscal strains already impacting our industry would only be (exacerbated),” said Lynn Rohrscheib, chairwoman of the Illinois Soybean Board from Fairmount. “These proposed caps would severely restrict market access and opportunities for biofuels and the economic impact would result in a negative ripple effect throughout our ag economy.”

ICGA president Aron Carlson was even more direct in his stated opposition to the biofuels cap. “Any deal that has its origin in Senator Cruz’s mission to undermine the RFS is no deal for corn farmers,” he said in a joint ISG-ICGA news release dated March 9. “Artificially capping RINs would drive down costs, no doubt, but it would also drive down ethanol blending rates and that is one hundred percent unacceptable to the ICGA.”

According to studies cited by the ISG and ICGA, capping the price for RINs would lead to an expected reduction of up to 300 million gallons in biomass-based biodiesel volumes each year and 750 million gallons of ethanol, while costing livestock producers $185 million in additional feed costs. Additionally, the proposed cap would reduce the value of soybeans by 16 cents per bushel and corn by 25 cents.

WASHINGTON, D.C. — Of interest to all rural dwellers is President Trump’s pledge to vastly improve rural infrastructure. We have followed this issue since Trump’s original campaign trail pledge. On March 14, USDA Secretary Sonny Perdue clarified the most specific plans the administration has come forth with during his opening statement on Trump’s “Rebuilding Infrastructure in America” plan for the Senate Committee on Commerce, Science and Transportation.

“The President believes in this vision for rural prosperity and sees infrastructure as a key ingredient. He knows that rural infrastructure needs attention — rehabilitation to reduce downtime for repairs, capacity to carry all the Made in the U.S.A. goods that rural America produces, and modernization to be sure American businesses compete and win the new electronic economy,” Perdue said, in part. “His proposal devotes $50 billion, or 25 percent of the overall infrastructure proposal, for rural areas with populations of 50,000 or less, allocating a majority of the rural investment — 80 percent or $40 billion — directly to states as block grants, by a formula based on rural population and rural infrastructure. States would then use their Rural Infrastructure Block Grant to choose the mix of projects that best fulfill rural priorities with a non-siloed approach to investing.”

Perdue added that the strategic infrastructure investments would infuse rural areas with stronger businesses and increase productivity of farmers, ranchers and foresters, leading to “the enhanced viability and prosperity of rural America.” Perdue’s entire opening statement to the committee can be viewed on the USDA website www.usda.gov. (USDA news)

A Class 1 USDA recall is a health hazard situation where there is a reasonable probability that the use of the product will cause serious, adverse health consequences or death. (USDA-FSIS)

WASHINGTON, D.C. — During a busy week for USDA Secretary Sonny Perdue, he also took time to laud a Republican colleague who assisted the farming community. On March 13, Transportation Secretary Elaine Chao announced an additional 90-day extension of the agriculture exemption from the electronic logging device mandate. Farmers feel the mandate would have been problematic because the devices do not accurately account for the ag exemptions currently provided by law.

“The ELD mandate imposes restrictions upon the agriculture industry that lack flexibility necessary for the unique realities of hauling agriculture commodities. If the agriculture industry had been forced to comply by the March 18 deadline, live agricultural commodities, including plants and animals, would have been at risk of perishing before they reached their destination. The 90-day extension is critical to give DOT additional time to issue guidance on hours-of-service and other ELD exemptions that are troubling for agriculture haulers,” said Perdue in a USDA news release. The Illinois Farm Bureau is among the state ag groups to speak in favor of the extension.

BRIDGEVIEW — An Illinois food company, Stampede Meat of Bridgeview, which is owned by SMI Holdings, is recalling around 484,000 pounds of beef products that may be infected with salmonella, the USDA Food Safety and Inspection Service announced last week. While the raw beef product is not the host to the salmonella strain, a non-meat ingredient, au jus seasoning, tested positive for the bacteria.

At issue are cases of meat containing 64 6-ounce or 8-ounce vacuum-packed packages of USDA Select or Higher Boneless Beef Top Sirloin Steaks with certain lot codes. The products subject to recall include the establishment number “EST. 19113” inside the USDA mark of inspection. While most of the steaks in question were sold to restaurants, FSIS is concerned that some product may be in consumers’ refrigerators. Consumers with questions about this Class I USDA recall should call Stampede Meat at (800) 262-0397. (USDA-FSIS news)