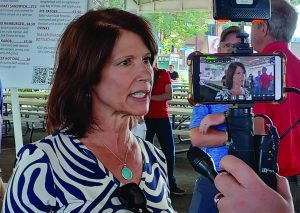 As combines prepare to roll, we have a look at harvest time crop conditions and projections for Illinois. Also this week: the Peoria Ag Lab received funding for a variety of crop studies, and farmers can soon be considered for a prestigious conservation award.

URBANA — University of Illinois Extension crop advisers are mostly in agreement around the state: crops are yellowing, dropping leaves and maturing at a quick pace. The unifying factor is the statewide dry conditions that have hastened yellowing of soybeans and corn. According to northern Illinois Extension crops educator Russ Higgins, last week was another dry one in his region of study. “In some fields the onset of crop maturity and loss of green color in both soy and corn has been dramatic over a one-week period,” Higgins reported.

Doug Gucker, Local Foods-Small Farms Extension educator, said that in the past week rainfall varied from a few hundredths to over 3 inches in east-central Illinois. “Crop maturity is advancing with soybean fields in the R6 to R7 stage and corn fields in the R5 to R6 stage. Early maturity soybean fields are turning yellow and early planted corn fields are testing in the low 30 percent to upper 20’s percent range,” he said.

In south-western Illinois, Nathan Johanning, Commercial Agriculture Extension Educator, said the area had been fairly dry until farmers received rainfall from 1 inch to over 4 inches of rain two weekends ago. “Crops are progressing, but most all fields are still green across the landscape. Cooler temperatures with the rain have slowed down the start of any dry down. Hopefully, some continued warm sunny days will keep our crops drying down and maturing,” Johanning said.

Analyst: Illinois soybean harvest will be less than ’21

URBANA — A Kansas State University crop expert has updated his earlier soybean harvest projections for the top 18 producing states, with Illinois farmers expected to harvest 3 bushels per acre less than in 2021.

This is according to Gregg Ibendahl, Department of Agricultural Economics at KSU, who projects an Illinois harvest of 61 bu./acre, or 3 bu./acre less than last year’s harvest of 64 bu./acre. Ibendahl estimates Illinois’ total harvested acreage for 2022 at 11.1 million acres, up from 10.5 million acres in 2021. Illinois’ total soybean production is estimated at 677 million bushels, eclipsing 2021’s record-setting 673 million-bushel harvest.

Based on estimates of state crop conditions from July 31, Ibendahl estimated a national soybean yield of 50.4 bu./acre and total national soybean production of 4.413 billion bushels. His Aug. 31 projections varied slightly, with an expected national yield of 50.5 bu./acre and production of 4.405 billion bushels. (Ibendahl, G. “An Estimate of Soybean Production From the 18 Leading Soybean States.” farmdoc daily)

PEORIA — Alongside Illinois Rep. Darin LaHood, R-18th, of Dunlap, Congresswoman Cheri Bustos, a Rock Island Democrat, visited the Peoria “Ag Lab” — officially known as USDA’s National Center for Agricultural Utilization Research (NCAUR) — to announce a federal appropriation of $4.5 million for a climate resilience and biomanufacturing initiative. The funding will serve to initiate novel research programs that will develop and utilize crops that improve the climate resilience and sustainability of food and energy production, foster new economic opportunities for rural communities and biomanufacturing industries and enhance the safety and security of the food supply. According to a Bustos news release, the initiative has three major components developed in response to specific stakeholder and national needs focused on wheat and barley, sorghum and industrial hemp.

The funding will also allow for the construction of a new research greenhouse at NCAUR, according to LaHood. “Construction of a research greenhouse will foster new economic opportunities for rural communities in Illinois and foster work on science related to the sustainability of food and energy production. I am proud of the continued bipartisan work with Congresswoman Bustos to advocate on behalf of the Ag Lab,” LaHood stated in his press release.

Leopold Award will be available to Illinois farmers

BLOOMINGTON — A call for nominations and applications will soon be issued in Illinois seeking the first state recipient of the prestigious Aldo Leopold Conservation Award. A panel of judges made up of agricultural and conservation leaders from Illinois will have final determination over who will be recognized as finalists and, ultimately, the recipient. The recipient will be recognized at a high-profile event and their story shared widely with the help of a professionally produced video. The recipient will receive a $10,000 cash prize and a crystal award, according to Megan Dwyer, director of Conservation and Nutrient Stewardship for Illinois Corn.

“Illinois farmers have made substantial efforts to scale their conservation practices across more farm acres over the past several years and this award is the perfect way to recognize a farmer’s efforts,” said Dwyer. The award, named for American author, philosopher, naturalist, scientist, ecologist, forester, conservationist, and environmentalist Aldo Leopold, recognizes farmers, ranchers and forestland owners in 24 states for their efforts to improve soil health, water quality and wildlife habitat on their working land. (Illinois Corn)

USDA reported 64 percent of the corn crop reached the dent stage and 89 percent of soybeans were setting pods in Illinois as of Sept. 4, which was 10 points behind the average pace in both categories. (Illinois Farm Bureau)