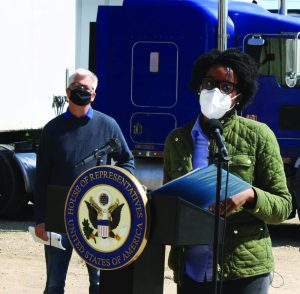 Your weekly farm and rural news roundup focuses this week on the politics of farming, with several new bills and proposed legislation being lauded by Illinois farmers and ag organizations. We also have fresh data regarding America’s number one ag export: the soybean. Please read on for more …

ROCHELLE — Though Illinois is one of the largest producers of agricultural goods in the country and home to more than 24 million acres of cropland, the state receives far less funding than its neighbors from federal agricultural programs that promote the adoption of conservation practices such as the Environmental Qualities Incentive Program, or EQIP, and the Conservation Stewardship Program, or CSP. In a recent blog, American Farmland Trust pointed out that between 2009-19 Illinois received between 16-51 percent less funding than all the other upper Mississippi states in combined  EQIP and CSP dollars. In addition, the farm bill reserves at least 60 percent of EQIP dollars for livestock and wildlife habitat projects, meaning that even less of that money is available for implementing regenerative practices on Illinois crop land.

“It is crucial that state funded programs step in to fill the gap. In Illinois, the primary programs that support farmers in implementing environmentally sound practices are the Partners for Conservation program and the Fall Covers for Spring Savings Premium Crop Insurance Discount program. Both of these programs are up for renewal this year in the 2021 legislative session,” according to Max Webster, AFT Midwest policy manager. “What’s exciting is that the programs have been updated and brought together in the same bill, HB1792 and SB2474, as the Partners for Nutrient Loss Reduction Act. That means, for the first time, the state’s primary conservation programs will be targeted toward achieving the goals of the Illinois NLRS.”

AFT is asking farmers to reach out to their state and federal legislators to call more attention to the funding disparity and how to make it better. “Your legislators want to hear that you support the Partners for Nutrient Loss Reduction Act, and what it will mean for supporting farmers as they adopt regenerative practices that keep the environment safe and healthy for everyone across the state and throughout the Mississippi River Basin,” Webster said.

“Farmers are on the frontlines of the climate crisis, bearing its harmful impacts,” said Underwood. “But as stewards of the environment, they’re also delivering solutions that benefit us all. We must put partisan politics aside to make sure farmers have a seat at the table and are fairly compensated for the solutions they provide. That’s why I’m so proud of this bill. It’s a farmer-led solution developed with the direct input of my community here in northern Illinois.”

The bill would mandate that the USDA’s Natural Resources Conservation Service establish region-specific climate change measures within the existing structure of the NRCS’ Conservation Stewardship Program. It would allow farmers to expand and implement integrated climate change mitigation systems on their land, while ensuring fair compensation for their climate solution contributions, according to the IFB.

SPRINGFIELD — A bill introduced by Illinois State Sen. Patrick Joyce, D-Essex, would create a statewide renewable fuel standard that requires diesel fuel sold in the state to contain at least 5 percent biodiesel prior to July 2024, and 20 percent after that date. SB 2394, an initiative of the Illinois Soybean Association, passed the Senate Agriculture Committee on April 15 and awaits further consideration.

ISA officials rallied support for the bill by hosting legislators at the DuPage Forest Preserve and the Chicago Park District to educate the lawmakers on the environmental and economic benefits of B20, along with the state policies that currently promote biodiesel use.

“The demand for biodiesel is growing quickly, and it’s important that Illinois keeps up. Biodiesel offers environmental and performance benefits, as well as an economic boost for our farmers,” said Joyce, in a news release. “As we invest in greener technologies, it’s important that we find ways to keep Illinois dollars in Illinois.”

BLOOMINGTON — Illinois was once again the top U.S. producer of soybeans in 2020, raising 605 million bushels on 10.25 million harvested acres with an average yield of 59 bushels per acre. It was revealed last week that soybeans were the top agricultural export from the

U.S., with increased shipments of soybeans to China leading the surge.

The FAS’ Agricultural Export Yearbook noted that U.S. soybean exports are forecast to continue at record levels for the 2020-2021 marketing year, which culminates in August. Total 2020 U.S. agricultural exports were worth nearly $146 billion in 2020, up almost 7 percent from 2019, the second-highest on record. (ISA news)

China, Canada, Mexico, Japan, the EU and South Korea were the top markets, respectively, for U.S. agricultural exports in 2020. (USDA-FAS)