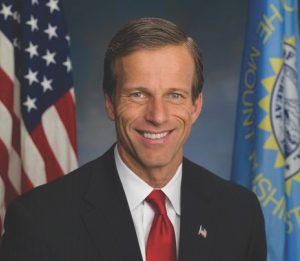 Senate aid for agriculture and biofuels is said to be included in last week’s COVID-19 relief package passed by Congress; we have a look at what it entails. Also in the news this week: a new Water Resources Development Act was passed by Congress to the applause of Illinois soybean growers. We also have details of 2021 dicamba regulations released by the IDOA. Please read on …

WASHINGTON, D.C. — President Donald Trump signed the $900 billion COVID-19 relief package Sunday, Dec. 27. The relief package was overwhelmingly approved by Congress, and sent to his private resort in Florida for his approval. Along with much-needed financial aid for millions of unemployed and underemployed Americans, the legislation also includes agricultural relief packages.

Sen. John Thune, R-S.D., the Senate majority whip, says a bill he co-sponsored offering assistance for livestock and poultry producers forced to euthanize animals during the first stage of the pandemic is included in the relief package. Also included is USDA assistance explicitly for biofuels producers, with funds to be granted at the discretion of the agriculture secretary.

Crop farmers would receive a supplemental $20 per-acre payment across the board, according to Sen. Debbie Stabenow, D-Mich., ranking member of the Senate Agriculture Committee. In addition, a reported $3 billion would go to cattle producers, contract growers of livestock and poultry, dairy farmers and livestock producers who incurred herd depopulation costs. Specialty crop growers are also set to receive $225 million for crop losses, reportedly.

The COVID-19 relief package, along with Thune’s Paycheck Protection Program for Producers Act, is part of a $2.3 trillion spending package to fund the federal government.

BLOOMINGTON — Congress is showing it can work together during the lame-duck stage of the Trump presidency. On Dec. 8, the Water Resources Development Act of 2020 was passed by the U.S. House of Representatives as part of the year-end omnibus and COVID-19 relief legislative package. The bipartisan legislation is essential to funding ports, harbors, and inland waterways, as well as ecosystem restoration and flood mitigation in both rural and urban communities. The bill’s passage was the result of negotiations with the Senate since House passage of H.R. 7575 in late July and S. 1811 in early December.

WRDA is important to Illinois farmers who use the inland waterway ports, harbors and business infrastructure to move their products to both domestic and export markets, noted Doug Schroeder, soybean producer from Mahomet and chairman for the Illinois Soybean Growers.

“We are pleased to end the year with a Congress who recognizes the critical importance of our locks, dams and water system infrastructure. Soybean farmers across the country rely on sound ag policy like the Water Resources Development Act (WRDA) to make sure our crop can efficiently get to market and the global customers we serve. Sixty percent of Illinois soybeans are exported and our farmers recognize the importance of maintaining our waterways to keep those export channels thriving. We join the ag industry in applauding the bipartisan work that brought about successful WRDA legislation,” Schroeder said in a prepared statement from the ISG.

The bill is included as an omnibus appropriation measure within Congress’ federal relief package.

Farmers cleared for dicamba use

SPRINGFIELD — The Illinois Department of Agriculture has finalized registration of dicamba-based products Xtendi Max with Vapor Grip Technology, Engenia Herbicide and Tavium Plus Vapor Grip Technology for the 2021 growing season. Of note, the IDOA plans to exercise its authority to move up the federal dicamba label recommended cutoff date for soybean application from June 30 to June 20. In addition, IDOA will impose a temperature restriction of 85 F for application, along with requiring applicators to consult the state’s Field Watch sensitive crop location registry for spraying, among other restrictions.

“This decision was made after evaluating several factors, including the reduction of pesticide misuse cases involving the use of dicamba on soybeans from 2019 to 2020,” said IDOA Acting Director Jerry Costello II. “In 2020, the Department included an 85 degree temperature restriction in addition to the June 20 cutoff date, resulting in an 80 percent decrease in dicamba misuse complaints.”

Use of the controversial herbicide, most commonly used by GMO soybean producers, is under scrutiny at the federal level. DTN reported last week that a group of environmental and farm organizations have filed a fresh lawsuit challenging the EPA’s latest dicamba registrations. The group, which has already successfully sued in federal court to have three 2018 dicamba registrations removed, includes the National Family Farm Coalition, Center for Food Safety, Center for Biological Diversity and Pesticide Action Network. They are now challenging the EPA’s 2020 registrations with a five-page filing in the U.S. Court of Appeals in San Francisco — the same court that oversaw the 2018 lawsuit.

BLOOMINGTON — The 2021 Illinois Soybean Summit — like many other scheduled farm and food conferences — is going virtual, taking place online Feb. 10, 17 and 24. Info and free registration is available at https://na.eventscloud.com/soybeansummit. (ISA news)