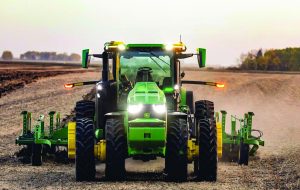 New year, new tech: John Deere has announced the world’s first fully autonomous tractor system will be available to farmers later this year. Also in the news: the farm bureau is asking farmers and ranchers to speak out against EPA’s proposed WOTUS revisions; please read on.

Deere to roll out autonomous tractor

EAST MOLINE — Well, it’s happening. The John Deere Company used the stage of the 2022 Consumer Electronics Show to announce they will roll out the first fully autonomous tractor later this year. The goal: to use autonomous machinery to help feed a growing world population. Deere made the announcement during a Jan. 4 press conference at the Las Vegas Convention Center.

According to reports, the autonomous tractor has six pairs of stereo cameras, enabling 360-degree obstacle detection and the calculation of distance. Images captured by the cameras pass through a deep neural network that classifies each pixel to determine the machinery’s movements, depending on if an obstacle is detected. The autonomous tractor continuously checks its position, ensuring it is operating accurately.

“The road of today’s technology is paved with the technology of the past,” said John Deere’s Chief Technology Officer, Jahmy Hindman. “In 1918 John Deere introduced its first two tractors, and about 100 years later, we have robotic machines used on the farm to feed the world.”

BLOOMINGTON — Mirroring the policy of the American Farm Bureau Federation, the Illinois Farm Bureau is asking farmers to speak out against changes to the ever-evolving Waters of the U.S. rule proposed by the U.S. Environmental Protection Agency. The new year began with the IFB issuing a “call to action” to its membership due to changes in the rule that could result in hardships to farmers.

At issue: a revised significant nexus test and an amended Prior Converted Cropland exclusion that could result in “some heartburn,” according to Lauren Lurkins, IFB director of environmental policy. The nexus test is a case-by-case test that allows the agencies to regulate ditches, ephemeral features, or low spots on farmland and pastureland that “have a more than speculative or insubstantial” impact to a navigable water, Lurkins explained. She added that the test also allows the agencies to aggregate waters that are “similarly situated,” which could enable EPA to expand their reach, capture entire watersheds and make moving dirt, plowing or building fences subject to regulations.

“This is not a … theory that [the proposed rule] could be a threat — it very much is a threat and has been a problem for many of our members,” Lurkins said, in an interview with the RFD Radio Network (not affiliated with this column).

According to EPA, the proposal “marks a key milestone in the regulatory process announced in June, 2021. The agencies propose to put back into place the pre-2015 definition of “waters of the United States,” updated to reflect consideration of Supreme Court decisions. This familiar approach would support a stable implementation of ‘waters of the United States’ while the agencies continue to consult with states, tribes, local governments, and a broad array of stakeholders in both the current implementation and future regulatory actions.”

The proposed rule was published in the Federal Register in December. A public comment period will close on Feb. 7.

SPRINGFIELD — For the second time in its history, a female has been selected to manage the Illinois State Fair. This was mentioned in a Jan. 3 Illinois e-News release naming Rebecca Clark, former public information officer for the Illinois Department of Agriculture, as manager of the Springfield fair. Amy Bliefnick, who served as ISF manager from 2005-14, was the only previous female to lead the fair.

Clark replaces Kevin Gordon, who first retired from the state at the end of 2017 following a 29-year career. However, Gordon came back to manage both the Illinois State Fair and the Du Quoin State Fair for the past several years. The Du Quoin fair now has a separate manager.

BLOOMINGTON — The Illinois Soybean Association is doubling its efforts to explore new soy export markets by naming Eileen Urish as their trade and exports Manager. Urish is transitioning to ISA after serving as project manager for the Illinois Pork Producers Association, where she assisted IPPA executive director Jen Tirey in legislative issues and political action committee outreach, among other roles.

As trade and exports manager for ISA, Urish will work to increase the engagement of ISA in the trade and export space by collaborating with farmers, exporters, foreign consulates, soybean buyer teams, and partner organizations, according to an ISA news release.

“Eileen’s addition to our team in the role of trade and exports manager is a major milestone for ISA,” says Director of Market Development, Andrew Larson. “For the first time, ISA will have at least two full-time employees devoted to developing markets. This will allow ISA to be even stronger working on behalf of Illinois soybean farmers.”

In addition, ISA announced the hiring of Jennifer Jones and Megan Miller as agronomy managers. Jones is leaving her former role as watershed outreach associate for the University of Illinois Extension, while Miller served as business development manager for Moore & Warner Ag Group. The two agronomists will work on behalf of Illinois soybean farmers in the development and the implementation of conservation agricultural research and outreach programs.