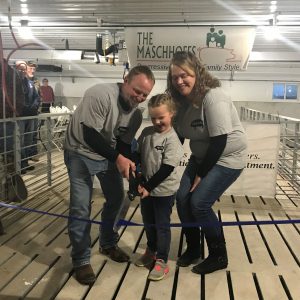 Charlie Coleman (left), along with daughter, Peyton, and wife Regan, cut a ribbon to signify the opening of their new 2,480-head pig barn outside of Donnellson. (Photo provided by Rita Frazer, RFD Radio Network)

This week’s roundup of farm and rural news headlines is led by the EPA’s decision to extend the registration of dicamba for over-the-top usage another two years. We have reaction from one of the state’s foremost experts on the controversial weed killer that has pitted farmer against farmer. Also: a top U of I farm economist has issued his take on potential acreage shifts in 2019 plantings, and we have a look at the extreme weather experienced across Illinois during October. Please read on …

BLOOMINGTON — The U.S. Environmental Protection Agency has extended the registration for two years for over-the-top, or in-season, usage of the controversial herbicide dicamba. However, there are new usage and label regulations intended to lessen the number of incidents of off-target applications of the weed killer, which can decimate non-GMO soybeans and specialty crops that are not dicamba-tolerant.

“Only certified applicators can apply this product,” said Jean Payne, president of the Illinois Fertilizer and Chemical Association, when asked to highlight the label changes. “In Illinois for the most part that was the case already, but they are making it clear that you can’t supervise someone who has never had training and testing to apply this product. A farmer can no longer have their hired people spray for them if they are not licensed.”

In addition, the EPA has set a 45-day cut-off from the date of planting for a window of application regardless of whether soybeans are planted early or double-cropped. Another change requires a 110-foot buffer between sprayed areas and any other crops, including corn and soybeans. “Farmers will need to use residual herbicides this year to manage weeds in their buffers,” Payne said. “Residuals will be a very important part of herbicide management next year.”

Because EPA did not issue its ruling until Oct. 31, IFCA and others will be left scrambling to fill a schedule of statewide, mandatory training and certification classes for applicators of dicamba. In 2017, IFCA began their classroom training on Nov. 4. This year, retailers and organizations such as IFCA are still awaiting their first look at the new labels. “It’s going to be probably after Thanksgiving this year before we can get training started, by the time we get everything lined up,” said Payne. We will feature more of Jean’s comments on the dicamba issue in next week’s column.

URBANA — Current market conditions support an acreage increase in corn and a reduction in soybeans in 2019, according to University of Illinois farm economist Todd Hubbs. In his weekly outlook for the U of I College of Agricultural, Consumer and Environmental Sciences, Hubbs said that though planted acreage for all principal crops will decrease from 2018 totals, soybean acreage will likely slide the most.

“As we move into 2019, the prospects of large adjustments to crop acreage increasingly focus on soybean acreage,” Hubbs said in an essay, Corn and Soybean Acreage Prospects for 2019, issued Oct. 29. “Acreage adjustments in many major growing areas may be in the form of crop adjustments instead of acreage losses. The current price environment across principal crops points to constant or modest changes in total planted acreage in 2019 and holds the potential for fewer overall soybean and corn acres.”
In Illinois, corn fetched an average of $3.38 per bushel in September 2018, up 11 cents from the same time last year. Soybeans sold for $9.08/bu. in September, which was down 43 cents from the $9.51/bu. paid in Illinois at the same time in 2017, according to the Oct. 30 Illinois Agricultural Prices report from the USDA.

There were 330 dicamba-related complaints alleged by Illinois farmers and landowners in 2018; in 2017, the Illinois Department of Agriculture received 246. (IFCA/IDOA)

URBANA — October’s heat, frost, snow and rain provided “just a typical October in Illinois,” according to Illinois State Climatologist Jim Angel. “I love the weather in Illinois — hardly ever a dull moment. This October we experienced days in the 90s, the first fall frost, the first snow of the season, and widespread heavy rains,” said Angel, in his weekly blog of all things related to climate in Illinois. “The statewide average temperature departure for the first nine days of October was 11.5 degrees above normal. The temperature departure from October 10-31 was 5.7 degrees below normal. The first snow of the season fell on Oct. 12. Freezing temperatures arrived across most of Illinois on Oct. 21.”

Angel made note of the “impressive” precipitation totals in northern Illinois during the month. “Several stations have received over 50 inches of precipitation through Oct. 31, including Elizabeth (Jo Daviess County) with 54.45 inches. That is 22.66 inches above normal!” he reported.

The topsy-turvy weather did little to restrict farmers’ harvest activities, by the looks of the Oct. 29 USDA-NASS Illinois Crop Progress and Condition report. The Illinois corn harvest was at 89 percent, compared to 71 percent last year, while soybeans were 86 percent harvested, putting them on essentially the same pace as last year’s bean harvest.

DONNELLSON — A Montgomery and Bond County farmer and his family celebrated the addition of a 2,480-head pig barn to their family farm, which for the past 13 years had raised only row crops. Charlie Coleman, the fifth generation of Colemans to farm in the area, invited friends and locals to the barn for an open house and meal to celebrate the addition to the farm on Nov. 1.

“My family is excited for the new opportunities this will bring to our farm, helping to feed and fuel the world,” said Coleman, who cut the ribbon on the barn along with wife, Regan, and their two young children. Construction on the barn was performed by many local businesses, from the building frame to electric, concrete and other work. Once pigs are in the barn, they are expected to consume around 40,000 bushels of corn and 6,000 bushels of soybeans grown by local farmers. The pig farm will produce over 320,000, 5- to 7-ounce, pork chops and over 5 million slices of bacon each year, according to the Illinois Livestock Development Group. (IPPA news)