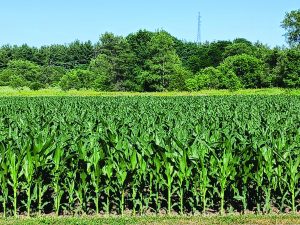 Despite drought-like conditions, these corn plants in north Peoria County appeared on pace last week to be knee high by the Fourth of July. (Photo by Tim Alexander)

With the official start of summer upon us, it’s time for farmers to start talking about — what else — the weather? We have a lot of info on how dry it was, how dry it is and what to expect in the near-term, weather-wise. Grab some sunscreen and please read on …

Prior to the rain and storms that saturated central and parts of northern Illinois on Saturday, Nafziger had commented on how dry some areas of the state were becoming. “The big story remains the dry weather: on the U.S. Drought Monitor released on June 23 describing conditions as of June 21, 41 percent of Illinois is in abnormally dry (D0) condition, and 6 percent is in moderate drought (D1),” Nafziger reported.

“This includes about 10 counties in the northwest corner of Illinois, 10 counties in the southernmost part of the state, and more than 20 counties in east-central Illinois. The D1 region includes most of Vermilion, Champaign, DeWitt, Piatt, Douglas, and Moultrie counties. This is being called a ‘flash drought,’ reflecting the fact that it developed quickly: on May 31, only 9 percent of the state was at D0, and none was at D1. Unfortunately, ‘flash’ does not mean that it will disappear quickly.” (Harbach, C. “Illinois Crops Update 6/24/22.” University of Illinois Extension, June 24, 2022.)

BLOOMINGTON — Building off Nafziger’s comments (see previous news item), just how dry did it get across Illinois in June before the official start of summer? Consider: the portion of topsoil moisture rated short to very short jumped from 12 percent to 31 percent statewide in just one week, June 13-20, the National Agricultural Statistics Service Illinois field office reported. Soil moisture at two-inch depths had declined 24 percent overall in the first half of June just prior to an even drier week, according to the Illinois State Water Survey in Urbana.

“The problem is the heat with lower humidity values (the third week of June) has just evaporated what little amount of water was left in the topsoil,” said Trent Ford, Illinois State Climatologist for the ISWS. “Only a few places in the state have adequate topsoil moisture.”

Ford noted that this week’s temperatures will become more moderate and some areas will receive precipitation — while others remain parched. “Those types of pop-up showers are not the kind of systems that really bring us back to where we need to be,” Ford said. “A pop-up storm can help some folks and give somebody 1.5 inches of rain, which is really nice. But the neighbor down the road gets nothing. And, being that they’re sometimes strong thunderstorms, they can bring strong winds and hail, which we don’t need.”

Farmers shouldn’t yet be too concerned about drought affecting the development and maturity of their crops as of yet, according to the state climatologist. “We’re not at the point (where) a lot of alarm bells are going off. If we can string together a couple (rain) systems, it can do a lot of good.” Ford said. “But, if we continue on (without much relief), we will see some impacts in July.” (Illinois Farm Bureau news)

WASHINGTON, D.C. — Illinois was not the only state to be under drought or near-drought conditions. USDA’s June 23 Water and Climate Update noted that as summer officially began, the country was dominated by a heatwave with record high temperatures.

“As of June 21, 35 million Americans were under heat advisories with some areas experiencing a heatwave continuing from last week. The heat dome dominated the Plains as temperatures reached 15-20 degrees above normal. As the heat moves east, the high temperatures are expected to topple scores of records. Cities in the South are forecasted to have dangerous heat indexes well above 100 degrees,” USDA reported.

According to the National Drought Mitigation Center, as of June 21 “precipitation was lacking in many locations that experienced excessive (in some cases record) heat, leading to widespread expansion of abnormal dryness and moderate drought conditions along the Mississippi and Ohio Valleys, the Southern Plains, and the Southeast.”

Though heavy rainfall associated with the Southwest Monsoon fell across parts of the “Four Corners” region of Arizona, Utah, Colorado, and New Mexico, the storms only acted to halt any further degradation that week. “Given drought is strongly entrenched in the Four Corners, an active Southwest Monsoon circulation will need to persist for conditions to improve,” the NDMC report read, in part.

ANKENY, Iowa — A farmer buying diesel fuel would save 95 cents a day by a federal suspension of the fuel tax, but $2.51 cents per day if both federal and state diesel taxes were suspended. This is the conclusion of Mike Steenhoek, executive director for the Soy Transportation Coalition, of which the Illinois Soybean Association is a member. Steenhoek bases the results of his analysis on several controls, including a diesel tax rate of 64 cents per gallon (24.4 cents per gallon in federal diesel taxes plus 40.24 cents per gallon in state diesel taxes according to the American Petroleum Institute), 1,420 gallons of diesel purchased per year, 7,100 miles driven per year and other averaged factors.

“Of course, individual state diesel taxes will be higher or lower than 40.24 cents per gallon average,” said Steenhoek, who shared his observations with President Biden in the weeks leading up to his fuel tax suspension proposal.

The GROWMARK Foundation is offering a dollar-for-dollar match for the first $5,000 donated through their program to help feed Ukrainians affected by war. Visit bit.ly/GROWMARKFoundation. (Karen Jones/GROWMARK)