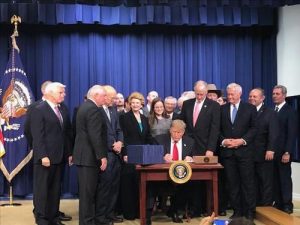 The good news is that the president has signed the 2018 Farm Bill. The bad news: the government has shut down, and the soybean and corn markets– along with prices– are continuing their descent below profitability. Again, the week in review is punctuated by political doings affecting the farm and rural community. For more on the new farm bill, please read on…

WASHINGTON, D.C. – With Illinois Farm Bureau (IFB) President Richard Guebert, Sr. peering over his shoulder, President Donald Trump signed into law a five year, $867 million farm bill last week. It bears noting that the president signed the bill without the key provisions that would impose work training and other requirements of folks who rely on the Supplemental Nutrition Assistance Program (SNAP) that Trump based part of his successful campaign on. This left many pundits scratching their heads for about ten minutes, before it was announced that the Trump administration would attempt to circumvent legislation to change SNAP requirements by mandating a change in how SNAP benefits are distributed within the USDA itself. Stay tune to see how that all works out.

As for what the bill means for farmers, the bill is a victory in that it gives farmers the choice between revenue-base and price-based commodity programs, allows for a nationwide yield update for Price Loss Coverage (PLC) beginning with the 2020 crop year, and changes Agricultural Risk Coverage (ARC) to allow increased yield plugs and yield trend adjustments, according to the IFB. It also includes incentives to encourage farmers to engage in conservation programs that protect natural resources, improves the safety net for dairy farmers and strengthens market development programs such as MAP and FMD– programs Trump had earlier pledged to defund.
Trump was flanked by lawmakers and farm bureau leaders, including Guebert, during the December 20 signing. “The 2018 farm bill is a complete package that serves all Americans,” Guebert said. “The farm bill helps to ensure the food security and economic security of our nation. Directly or indirectly, it benefits everyone in towns large and small.” The final farm bill version was supported by all of Illinois’ 18 representatives and two senators, the IFB reported.

Illinois Corn Growers Association (ICGA) president Ted Mottaz said the bill provides “substantial” security for farmers in a time of increased market uncertainty. “ICGA is pleased that our advocates in the House and Senate were able to maintain a strong crop insurance program, our top priority,” Mottaz said in a prepared statement. “Another important provision is support for trade promotion programs like the Market Access Program and the Foreign Market Development program. Illinois corn farmer investments are leveraged with these public dollars to discover, develop, and grow markets around the world for corn and corn in other forms, like ethanol and DDGs.” (IFB, ICGA news)

The 2018 Farm Bill is also known as the Agriculture Improvement Act of 2018.

SPRINGFIELD – Illinois pig and livestock farmers were well-represented during discussions leading to the final committee conference report of the 2018 Farm Bill signed by the president last week. Illinois was fortunate enough to have three pig farmers on the 2018 National Pork Producers Council (NPPC) farm bill taskforce, which relayed information from producers to the capitol. Sharing pork-related concerns with Agriculture Secretary Sonny Perdue in the days leading up to the final committee version were Ken Maschhoff, current past president of the NPPC and pig farmer from Carlyle, Gary Asay, National Pork Board member and former Illinois Pork Producers Association (IPPA) president, and Jennifer Tirey, current IPPA executive director.

Pork producers are pleased that the bill includes mandatory funding for animal disease prevention and preparedness. New language in the bill allows the USDA to use funds to establish a foot and mouth disease (FMD) vaccine bank, along with support for the National Animal Health Laboratory network and state efforts to prepare for a foreign animal disease outbreak. The IPPA and NPPC have long lobbied for such funding, believing that the ability to respond to foreign animal disease emergencies is critical to safeguarding the well-being of animals, the economy and our food supply.

“This is a huge win for the pork industry,” said Mike Haag, IPPA president and pig farmer from Emington. “IPPA has been proactive in distributing awareness and educational resources to farmers as foreign animal disease, specifically African swine fever, continues to be a threat for our country.” (IPPA news)

EAST PEORIA – As reported in this column last week, the Illinois Corn Growers Association is celebrating the inclusion in the 2018 Farm Bill of language that allows farmers to combine more than one parcel of farmland in a single crop insurance policy, including crop land in different counties. Responding to an audience question during the December 19 Farm Economics Summit in East Peoria, University of Illinois economist Gary Schnitkey noted that the policy option would not be implemented by the USDA Risk Management Agency in time for the 2019 growing season.

“It will not– repeat, not– be available for farmers until 2020,” he said of the change. “There are not a lot of details on that yet but here is the idea: enterprise units covered only one county, but the farm bill will now allow for a multi-county enterprise unit. Let’s say you have corn in two counties; currently you would have two enterprise units. Under the new unit structure, you would be able to combine those together.”

ICGA president Ted Mottaz said the association is doing a “victory lap” over the clause’s inclusion in the final farm bill. “We’ve been working on those changes diligently on behalf of our farmer members. These changes are a win for us, but also a win for other farmers and taxpayers, too, as these programs become more efficient and effective.”