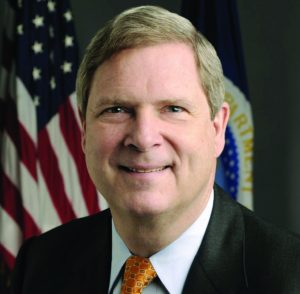 The big news in agriculture this week was the selection of former USDA Secretary Tom Vilsack by President-elect Joe Biden to resume his former post under Biden’s leadership. Meanwhile, as seats in Congress transition, so will some key ag leaders; we have the latest speculation. Please read on …

IFB: Vilsack will work for biofuels

BLOOMINGTON — During a press interview with Illinois Farm Bureau President Richard Guebert Jr. prior to the IFB’s annual business meeting last week, I had the opportunity to ask Guebert who he would like to see named as President-elect Joe Biden’s agriculture secretary. The IFB president responded that the farm bureau stood willing and able to work with any of the top three rumored choices for a secretary, including rumored front-runner Ohio Rep. Marcia Fudge.

Guebert and this columnist were not the only ones taken by surprise when, days later, Biden tapped former USDA Secretary and current U.S. Dairy Export Council president and CEO Tom Vilsack for the job. The selection of the former ag secretary under President Barack Obama was blasted by the far left, citing Vilsack’s past issues with black farmers’ groups and the NAACP as reasons to bypass the 69-year-old, two-term Iowa governor in favor of a younger, more progressive candidate.

However, the agriculture community is largely supportive of Biden’s appointment of Vilsack, who had achieved past success in promoting the growth of U.S. biofuels, export trade and GM crops as Obama’s ag secretary. In a prepared statement, Guebert expressed his support for Vilsack:

“Vilsack, during his first term as ag secretary, was a big proponent of biofuels and global trade expansion. Support for biofuels remains a high priority for Illinois farmers as one in every three bushels of Illinois corn produced is converted into ethanol. An experienced nominee like Tom Vilsack has a solid understanding of U.S. agriculture and the broad scope of work necessary to form strong farm and food policy. Vilsack would be stepping in to steer a familiar ship as the agency works to maintain the country’s food security and vital agriculture programs once he is confirmed by the Senate.”

Top ag positions up for grabs

“When you think about Chairman Peterson, Mike Conaway and Sen. Roberts who worked on the Senate and the House (Ag Committees), we collectively lost 85 years of farm policy experience,” said John Newton, chief economist, American Farm Bureau Federation. “Working with all the new folks that are going to be coming into the agricultural sector is going to be important. I know that President-elect Biden’s team, the transition folks, have indicated their primary focus is on rebuilding the domestic economy. Getting the vaccine, getting past the virus. I think our nearby issue is going to be domestic as opposed to bilateral or multilateral trade agreements.”

Newton advised farmers to plan for no ad-hoc government support payments, such as CFAP or MFP, in 2021. “This type of ad hoc support is not going to be something that continues under the next administration,” he said. “So, that’s why the optimism in the markets we’ve seen in recent months is much needed.” (AFBF/IFB news)

U of I using drones, AI to predict maturity

URBANA, Ill. — In an era of distrust of government-issued data, the agriculture community is not immune. For at least two years some farmers and farm organizations have been calling on the USDA to review the methodology it uses when determining crop maturity, quality and yield projections. A new study from the University of Illinois allows researchers to predict soybean maturity date within two days using drone images and artificial intelligence, greatly reducing the need for boots on the ground.

“Assessing pod maturity is very time consuming and prone to errors. It’s a scoring system based on the color of the pod, so it is also subject to human bias,” said Nicolas Martin, assistant professor in the Crop Sciences Department at Illinois and co-author on the study. “Many research groups are trying to use drone pictures to assess maturity, but can’t do it at scale. So we came up with a more precise way to do that.”

Private industry is also expressing interest in the U of I study, according to Martin.

“We had industry partners on the study who definitely want to use this in the years to come. And they made very good, important contributions. They wanted to make sure the answers were relevant for breeders in the field making decisions, selecting plants, and for farmers.

“Finding a good method to help breeders actually make decisions on large scales is quite exciting.”

The article, “High-throughput phenotyping of soybean maturity using time series UAV imagery and convolutional neural networks,” is published in Remote Sensing. (U of I ACES News)

BLOOMINGTON — Last week, three Illinois farmers and former Illinois Soybean Association board members were elected to national leadership positions. Daryl Cates was selected as American Soybean Association Secretary, Stan Born was named ASA Treasurer, and Dan Farney was elected as the United Soybean Board Chairman. Congratulations and thanks for your service to agriculture! (ISA news)