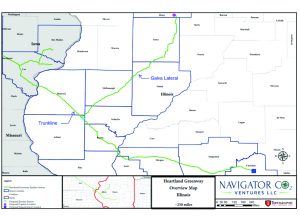 In this week’s farm and rural news report, we have information about projected 2023 commodity prices, a proposed CO2 pipeline that would bisect Illinois and low water levels affecting ag trade on the Mississippi River. Please read on …

IFB director of business and regulatory affairs Bill Bodine said IFB has not taken a position on the pipeline project, which would transport liquid CO2 across four Midwest states for storage in central Illinois. However, the farm bureau would like to see a pause in the pipeline’s development while leaders look into the project’s potential benefits and drawbacks for rural landowners.

IFB petitioned to intervene “in order to participate in the case and raise any issues or concerns that may serve as a part of the regulatory approval process,” according to Bodine. “I do want to be clear: the petition to intervene does not mean that IFB opposes the project. IFB has not taken a position on the project,” he said.

Illinois would be the location of the terminus of the multi-state pipeline, which would also include Nebraska, South Dakota, Minnesota and Iowa. The pipeline would source liquid CO2 from 21 collection sites located in close proximity to ethanol and fertilizer production facilities.

Economists: Prices should remain robust in 2023

URBANA — Prices on current 2023 CME contracts point to relatively high projected prices in 2023, according to economists with the University of Illinois farmdoc team. Expectations will center on $6.15 per bushel for corn and $13.45 per bushel for soybeans, though historical price changes suggest that there are significant possibilities for lower projected prices. This is according to Gary Schnitkey, Krista Swanson, Nick Paulson and Jim Baltz of the U of I Department of Agricultural and Consumer Economics, and Carl Zulauf, Department of Agricultural, Environmental and Development Economics at Ohio State University.

The economists speculated that lower price projections could occur in the event of a combination of the following factors:

“Relatively high prices are needed to have profitability given significant increases in costs for 2023,” the economists posited in their published report, “What Will 2023 Projected Prices Be?“ (farmdoc daily (12):151, Department of Agricultural and Consumer Economics, University of Illinois at Urbana-Champaign, Oct. 4, 2022). “Any price declines could result in negative profit margins, particularly until projected prices for crop insurance products are set in February based on settlement prices of the November (soybeans) and December (corn) 2023 Chicago Mercantile Exchange (CME) futures contracts.”

“On top of many safety restrictions hampering shippers, barge freight costs soared to record highs and are continuing to rise for the month of October,” reported DTN’s basis analyst Mary Kennedy.

Low water levels have been an issue throughout the entire waterways system due to lack of rain in the Midwest and Ohio River Valley, Thomas Russell of Russell Marine Group told DTN on Oct. 1. “In recent weeks, low water levels, particularly on the Lower Mississippi, have resulted in barge terminals having difficulty loading barges with some barge terminals unable to operate due to low water at docks,” he said.

The Army Corps of Engineers’ St. Louis office is currently in charge of dredging efforts on the river. “We are currently at -0.7 feet on the St. Louis gauge and are preparing the channel for -7.0 feet, although as we experienced in 2012, the fate and transport of sediment gets dicey when below -5.0,” said Chief of Water Control Operations Joan Stemler. “The Missouri River cutoff, which usually impacts us in late November or early December, is the next point we are watching.”

BLOOMINGTON — Together with the Soybean Research Information Network, the Illinois Soybean Association is delivering 5,000 lunchboxes to 111 Illinois grain elevators during harvest. The lunchboxes will go to farmers in 106 cities, covering 47 counties across the state.

This is the second year for the program, which is designed to thank farmers for their contributions at harvest time. Farmers bringing their harvested crops to elevators will receive a lunchbox filled with snacks, a drink and information on the latest soybean research from around the country.

“We are so excited to partner with SRIN to provide harvest snacks and information about the great checkoff funded soybean research happening in Illinois and around the country,” says ISA Agronomy Programs Manager, Megan Miller. “Be sure to keep the soybean defoliator guides in your truck for soybean scouting next spring.” (ISA news)

The Illinois corn harvest was at 13 percent as of Oct. 2, compared with the five-year average of 29 percent. (USDA-National Agricultural Statistics Service)