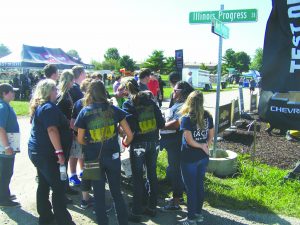 The 2020 Farm Progress Show, scheduled for Boone, Iowa, has been canceled due to the COVID-19 pandemic. The largest outdoor farm machinery show in North America will return to Decatur in summer 2021. (2019 FPS photo by Tim Alexander)

Farmers worried about finding markets for their corn and corn byproducts are breathing a little easier this week, now that the U.S.-Mexico-Canada trade agreement has been ratified — we have the details. Also this week, the Illinois Farm Bureau has joined with other Illinois ag groups to voice objections to new CAFO proposals before the Illinois General Assembly. For these and other items of interest to farmers, please read on…

BLOOMINGTON — The United States-Mexico-Canada Agreement went into effect on July 1, during what the American Farm Bureau Federation called “a crucial time for farmers and ranchers struggling to recover from COVID-19 losses and a depressed agricultural economy.” The expected $2 billion annual increase in U.S. agricultural exports and overall increase of $65 billion in gross domestic product is expected to provide a welcome boost for farmers. USDA estimates COVID-19 contributed to a $50 billion decline in commodity value alone for 2019, 2020 and 2021 production totals. This does not include all of agriculture’s losses, which would be billions more, according to the AFBF.

“The launch of the USMCA brings optimism to the country’s farmers and ranchers at a time they need it the most,” said AFBF President Zippy Duvall. “We’re grateful for the opportunity to build on the success of the North American Free Trade Agreement, and we’re eager to see the results on America’s farms. It’s important that our neighbors uphold their end of the deal, so the agreement provides a stabilizing force amid the unpredictability of a pandemic in all three countries.”

Illinois Corn Growers Association President Bill Leigh also reacted optimistically to the enactment of the trade agreement. “It’s been a long journey from the first conversation about modernizing the North America Free Trade Agreement to today, full entry into force of the USMCA.  Farmers have constantly been in touch with legislators about the importance of a workable trade agreement with our neighbors and we celebrated when the House and Senate passed this bill.  Today, we are setting the course for our descendants who will also get to enjoy the commerce with Mexico and Canada that have benefitted the ag industry for the last 26 years,” said Leigh, a Minonk (Woodford County) farmer.

Illinois Corn is lauding the fact that the USMCA agreement maintains zero tariffs on U.S. feed grains, co-products and ethanol. In addition the pact:

IDOA: The shows must go on

SPRINGFIELD — The Illinois Department of Agriculture announced last week it will, after all, host junior livestock and horse shows, providing Illinois’ youth with an opportunity to show their animals following the cancellation of both state fairs in Illinois. The Junior Livestock Expo will take place in Springfield over the course of two weekends in September — beef, sheep, dairy goats, pygmy goats and rabbits will all show Sept. 11-13, while swine, dairy cattle and meat goats will have their turn in the show ring on Sept. 18-20. In addition, a Junior Horse Show will take place on the Du Quoin State Fairgrounds, with English showing Aug. 29-30 and Western Sept. 5-6. “After the cancellations of the Illinois and Du Quoin state fairs we knew there was a need to recognize our junior exhibitors who work year-round preparing for the fairs,” said Jerry Costello II, Acting IDOA Director. “We are excited to provide modified shows that will provide an opportunity for young adults to exhibit their animals safely following the Restore Illinois plan.” (Illinois e-News release)

ST. CHARLES — For the first time in its 65-year history, the Farm Progress Show won’t go on. In the best interest of visitors, exhibitors, partners and staff, Farm Progress has made the difficult decision to cancel both shows in 2020 due to rapidly changing conditions related to the COVID-19 pandemic. Show management had confirmed earlier that the two shows would be operated differently with physical distancing a requirement, along with other health and safety changes to the events. While state and local officials had expressed support for both shows, Don Tourte, Senior Vice President, Farm Progress said that in a very short time it became apparent that the situation across the U.S. had rapidly changed. “We are all disappointed to not host the events this year, but feel confident that this is the right decision for our community,” said Tourte.

Mexico is the top importer of U.S. corn and dried distillers grains with solubles (DDGS); the U.S. supply’s 94 percent of Mexico’s corn imports.