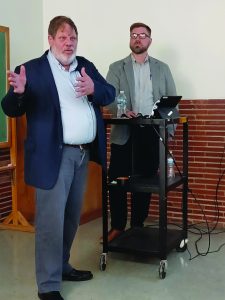 Dave Loos (l) and Collin Waters of the IL Corn Marketing Board are pictured at the Peoria County Farm Bureau, where they talked about food, fiber and fuel on March 24. (Photo by Tim Alexander)

The Illinois Farm Bureau issued a call to action for farmers to respond to a new survey on fertilizer pricing and availability challenges. Also this week: A report on new funding priorities of the Illinois Corn Marketing Board, and an analysis of the relevance of conservation programs heading into a new round of farm bill debates. Please read on …

Farmers asked to sound off about fertilizer prices

“The No. 1 topic that I’d like to raise with them is how we can spend those dollars at the local level, local cooperative level maybe or the mom and pops out here to provide more storage for fertilizer, anhydrous, etc.,” said IFB President Richard Guebert Jr.

Producers are asked to describe challenges with market concentration and power in the fertilizer industries, including access to fertilizer, pricing, availability, transportation and delivery and quality. Farmers can also comment on both long- and short-term trends in fertilizer prices, among other talking points.

The USDA expects to open applications for the production expansion program this summer, and to award funds by the end of 2022. Farmers who did not receive the notification but want to join the IFB call to action should text FERTILIZER to 52886. The USDA comment period lasts until May 16. (IFB news service)

PEORIA — In a wide ranging presentation, Illinois Corn Marketing Board director of exports and logistics Collin Waters laid out the board’s new funding priorities for a group of farmers who gathered at the Peoria County Farm Bureau on Thursday, March 24. In order to continue to fund investments in lock and dam improvements on the Illinois and Mississippi rivers and funnel dollars into other priorities, the ICMB is asking farmers to approve a hike in the current corn checkoff fee (a surcharge on seed purchases) from five-eighths of a cent to seven-eighths of a cent. The issue will be decided on Tuesday, March 29, when farmers will have the opportunity to vote on the matter.

If the referendum is passed, the extra revenue stream could fund campaigns that increase the “relevance” of agriculture in Illinois, according to Waters. “The farmer voice in Illinois is maybe not as loud as it should be in Springfield and other places,” he said. “Growing ethanol demand for fuel is hugely important, as is export promotion. Illinois is the top corn exporter, and that is primarily due to logistics. The Illinois River is hugely important to corn exports in Illinois.”

Promoting corn meal as livestock and poultry feed by providing support to the U.S. Meat Federation will also be a funding priority. “Every pound of beef, pork and poultry that gets exported drives demand for corn and soybeans in the U.S. We work really closely with export groups because we know this drives demand for U.S. farmers,” said Waters. “Corn exports have been trending up over time. 2021 was a record year, and I’m cautiously optimistic we can do this again.”

Dave Loos, ICMB ethanol technology export, also addressed the farmers. Loos talked about the importance of funding renewable fuels promotion as a transitional fuel towards the adoption of electric vehicles, a stated goal of the Biden administration. He also encouraged farmers to promote the Next Generation Fuels Act (HR-5089), a bill sponsored by Rep. Cheri Bustos, D-17th, that would require fuel refiners to use sources that result in at least 30 percent fewer greenhouse gas emissions than unblended gasoline.

URBANA — With the halt of exports of wheat, corn and other Ukraine-produced commodities due to the Russian invasion of the country, potential food shortages in European and African nations have been identified. This could mean that more food will have to be produced by other food-exporting countries around the world — including the U.S. — to assuage the shortage. The prospect of being called on to produce more of the world’s food is thrusting the USDA’s conservation programs — and the acreage they protect from the plow — back on the potential chopping block. A pair of Illinois farm economists caution against a rush to pull back on conservation acreage in the U.S. just yet, however.

“Over 20 million acres of former cropland is locked away from production in long-term contracts, but that does not necessarily offer a simple solution for shortages, particularly in the short term. The program is neither monolithic nor static. Acres enrolled in CRP (USDA’s Conservation Reserve Program) have declined significantly since the modern peak of 36.8 million total acres in 2007, but more than half of the acres enrolled have shifted into the continuous subprograms, especially across the major crop producing areas,” reported Jonathan Coppess of the Department of Agricultural and Consumer Economics at the University of Illinois, and Christopher Laingen, Department of Geology and Geography at Eastern Illinois University.

“Much more needs to be known about all enrolled acres, their potential for meaningful production, and the potential consequences. Evaluation should also incorporate the current and near-term state of commodity production and usage, including that American farmers planted 8.6 million fewer acres of wheat in 2021 than they did a decade earlier. As the agricultural committees in Congress begin the farm bill reauthorization process, CRP will be among the major topics reviewed, debated and for which changes will be considered. USDA and other researchers could assist the search for effective responses by producing a full inventory and evaluation of the acres under contract. Some subset of the enrolled acres could contribute to relieving shortages, but beneath others may lie the Dust Bowl’s mountains of blowing topsoil or the 1970s erosion problems.”

The full article, Mapping the Farm Bill: Reviewing the CRP; Law, Land & History, published March 24, can be accessed at www.farmdocdaily.illinois.edu.

Illinois, the nation’s top corn exporting state, shipped over a billion bushels of corn out of state in 2021, most of it destined for overseas markets. (ICMB)