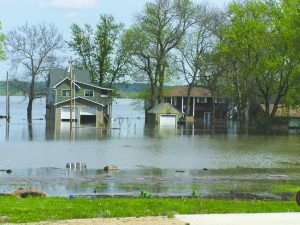 With emergency declarations now covering 37 Illinois counties, Gov. J.B. Pritzker announced last week he would take additional steps to assist farmers hurt by record rainfall and flooding; we have a report. Also, corn growers are pleased that Mexico has ratified their end of the USMCSA, or NAFTA II, trade agreement, while soybean producers traveled to Council Bluffs to urge more action from the administration to end the tariff wars with China and elsewhere. For these and more timely agricultural news stories, please read on …

SPRINGFIELD — Combining the resources of the Illinois Department of Agriculture and the Illinois Emergency Management Agency to ensure Illinois farmers can access all available state resources is among the actions taken by Gov. J.B. Pritzker last week to assist farmers hurt by record rainfall and flooding. “I know farmers have had to make difficult planting decisions this year due to extreme weather conditions — I’ve instructed my staff and agencies to provide assistance to help ease the pressures felt by farmers across Illinois,” Pritzker said, in a June 19 news release.

“In the weeks to come, as the water recedes, we will begin to see the damage from this flood. County damage estimates will be a critical tool in qualifying for federal disaster dollars,” added Alicia Tate-Nadeau, acting IEMA director. “As we move forward, IEMA will continue to work with county emergency managers as they work to identify the true cost of this great flood.”

Pritzker recently huddled with USDA Farm Service Agency Director William Graff to ensure Illinois remains high on the federal authority’s agenda. On June 27, the FSA State Emergency Board will meet to decide whether to recommend an agricultural disaster declaration, which would allow Pritzker to seek additional federal assistance for counties with affected farmers.

For this reason, IDOA Director John Sullivan is recommending farmers contact their local FSA offices to report their planted acres in time for the federal July 15 filing deadline. Currently, 37 Illinois counties have been declared disaster areas by the governor.

BLOOMINGTON — With Mexico’s announcement on June 20 they would agree to its terms, one-third of the nations involved in the proposed U.S.-Mexico-Canada trade agreement called NAFTA II by many, have now ratified the legislation. Following the Mexican Senate’s ratification of the proposal, Illinois Corn Growers Association President Ted Mottaz, a farmer from Elmwood, issued the following statement:

“Mexico is a vital trading partner for Illinois corn farmers. We are thrilled to learn that Mexico’s Senate has made the crucial step in ratifying the USMCA agreement. We’re appreciative of President Lopez Obrador’s leadership on the issue, as well as the support of the Mexican Senate. Illinois is responsible for growing more than 40 percent of the corn that Mexico imports via rail and water transportation routes and we’re looking forward to continuing this strong trading relationship.”

BLOOMINGTON — Illinois Soybean Growers leaders traveled to Council Bluffs, Iowa, on June 11 to bring their agenda for improved trade relations to President Donald Trump, who made Council Bluffs one of three campaign stops he made that day in the state. Following the event, ISG President Lynn Rohrscheib issued a statement in which she urged the Trump administration to work to bring back long-term market stability for soybean exports, shattered by the current tariff wars with China and other nations.

“With a lingering trade war, ISG remains engaged with legislators and administration officials who can help our producers by ending the trade war with China and by bringing back long-term market stability. The impacts of the tariff war and the wet spring are being felt by soybean farmers and rural communities across our state,” Rohrscheib stated, in part. “Illinois farmers want long-term relief from the year-long market uncertainty we have faced. Illinois’ 43,000 soybean producers rely on trade to maintain their livelihoods. We simply want to sell the crop we are raising to customers in the marketplace.”

SPRINGFIELD — A large hypoxic zone is being forecast this summer due to record rain and flooding in the Mississippi River basin by National Oceanic and Atmospheric Administration scientists, who believe historic flooding will exacerbate field nutrient runoff from farms. But Illinois farmers who embrace the Illinois Nutrient Loss Reduction Strategy have been growing cover crops, using split nitrogen applications, applying technology and building nutrient retention structures to retain nutrients on their fields and minimize losses, according to Warren Goesch, director of the Illinois Department of Agriculture.

“The challenge is, you can’t impact Mother Nature,” Goetsch told Kay Shipman of the Illinois Farm Bureau news service. “This doesn’t mean you quit trying. We do what we can, and Mother Nature does what she does. I don’t believe producers are ignoring this issue; they’re trying.”

Travis Sample, Illinois Environmental Protection Agency NRLS coordinator, said the NOAA projection for a gulf hypoxic zone of around 7,829 square miles — larger than the five-year average — may not be the actual measurement later this summer based on weather conditions.

CHAMPAIGN — After a week featuring an average 4.8 days suitable for fieldwork across Illinois, farmers made big strides in crop plantings. The June 17 USDA-NASS Illinois Crop Progress and Condition report shows that Illinois farmers had planted 88 percent of the corn crop and 70 percent of soybeans. The boost reflected an increase of 15 percent of corn planted and 23 percent of soybeans planted over the previous week, but remained far from the 99 percent corn and 95 percent soybean-planted rate over the past five years.