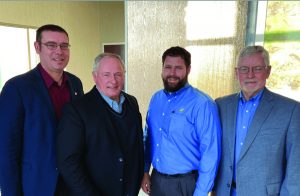 In this week’s farm and rural news report, the key term is “increases.” Specifically, in farmland values, per-acre cash rentals, and fertilizer prices. All are currently on historic ascents; we’ll look into the drivers. Please read on …

JACKSONVILLE — With interest rates low and commodity prices high, Illinois farmland values enjoyed a historic jump in value in 2021, with some properties seeing increases of 30 percent in value over the prior year. This was reported last week during the 2022 Land Values Conference, sponsored by the Illinois Society of Professional Farm Managers and Rural Appraisers.

“We ended 2021 incredibly strong with lots of action and we sit here in early 2022 trying to decipher where the wild ride will end,” said Luke Worrell, AFM, ALC, Worrell Land Services, Jacksonville, in his opening remarks. “Across the state we have seen meteoric rises in prices across all classifications of land. Leading the charge was Class A or ‘Excellent’ acreage which saw a jump of 26 percent. It is a number that can take your breath away, but across the entire state the regions with Class A farmland experienced a rise of 30 percent from two years ago.”

Worrell noted that many growers were able to sell their 2021 grain nearly 50 percent higher than they did with their 2020 grain, making higher commodity prices the top driver of the surge in land values.” It stands to reason that when potential gross farm income can see that jump, values could rise. Additionally, interest rates are still historically low. Borrowing strength is strong and there are many cash buyers out there as well. Historically speaking, land can be very bullish in unsettling turbulent times as many see it as a hedge on inflation,” he said. “Also, the supply of readily available farms was down in 2020 meaning that pent up demand loomed throughout 2021.” (ISPFMRA)

BLOOMINGTON — During the Commodity Classic, held March 10-12 in New Orleans, leadership of the Illinois Corn Growers Association met with a representative of The Mosaic Company to discuss fertilizer availability, pricing, and the impact on Illinois farmers. According to an article published to the ICGA website (www.ilcorn.com), the conversation was less than productive. When the corn growers asked if the company would support the temporary removal of tariffs on fertilizer, the Mosaic representative reportedly replied that tariffs are not a factor in the recent worldwide spike in prices. The representative also claimed that the company earns a financial profit just once every 10 years.

“At the end of the hour, I was convinced that Mosaic wasn’t really listening and brushed off all our concerns. We are trying to make an impact, but we aren’t getting anywhere fast. There is no silver bullet solution,” said Matt Rush, ICGA vice president. “The impact of fertilizer pricing and availability is a substantial problem for Illinois agriculture and we’re doing what we can do to address it, but without a lot of success.”

According to the company’s website, Mosaic’s full year 2021 revenues were up 42 percent year-over-year to $12.4 billion, as “stronger pricing” more than offset lower volumes. Gross margin for the year, at $3.2 billion, was up 200 percent from the prior year period. Mosaic’s gross margin rate in 2021 was 26 percent, up from 12 percent in 2020.

The meeting ended with the two parties respectfully agreeing to disagree.

“Whatever the facts, the problems we’re having with availability, pricing, securing fertilizer contracts, is requiring producers to change their fertilizer application behaviors on the farm which are unfortunately counter to our goal to reduce nutrient loss and clean up our water,” said Rush.

URBANA — Economists at the University of Illinois have offered their observations on the war in Ukraine and its ramifications for fertilizer prices not only in the U.S., but in Brazil — where a whopping 85 percent of its fertilizers are imported.

“The Russian invasion of Ukraine substantially elevates the risk of disruptions in the global fertilizer trade. Russia is the world’s largest exporter of fertilizers, accounting for 23 percent of ammonia exports, 14 percent of urea exports, 10 percent of processed phosphate exports, and 21 percent of potash exports, according to data from The Fertilizer Institute. The primary destinations of fertilizers from Russia are Brazil (21 percent), China (10 percent), the U.S. (9 percent), and India (4 percent),” reported Joana Colussi and Gary Schnitkey, U of I Department of Agricultural and Consumer Economics, and Carl Zulauf, Department of Agricultural, Environmental and Development Economics at Ohio State University.

The article compares the percentage of nitrogen, phosphate and potash fertilizers imported by both the U.S. and Brazil. Brazil imports 95 percent of its nitrogen fertilizers, while the U.S. purchases just 12 percent abroad. Potash is another story, with the U.S.’ dependence on imports greatly magnified).

The article notes that on March 11, Brazil and the United States pledged to increase their domestic production of fertilizers in order to reduce foreign demand and cut prices. Until that day arrives, the economists warned, prices could continue to force difficult, long-term management decisions for farmers.

“Farmers should expect higher fertilizer prices, leading to management decisions about the profitable use of fertilizers.  Given the geopolitical consequences of the conflict, these disruptions could play out over many years,” they wrote. (Colussi, J., G. Schnitkey and C. Zulauf. “War in Ukraine and its Effect on Fertilizer Exports to Brazil and the U.S.’” farmdoc daily)

On par with rising farmland values, short lease per-acre cash rent farmland value is on pace to rise by around 20 percent in 2022. (Gary Schnitkey-University of Illinois)