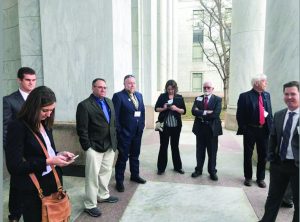 Illinois farmers voiced their views on a number of timely issues to lawmakers in the U.S. Capitol last week; we have the details in this week’s farm and rural news roundup. Please plow on …

BLOOMINGTON — The Illinois Farm Bureau sent a contingent of farmers to Capitol Hill last week to notify Illinois congressional leaders that rural Illinois is in need of additional infrastructure money. Specifically, the group is calling for increased downstate funding for rural broadband, roads and bridges and additional lock and dam upgrades that are vital for transporting farmers’ goods.

After meeting with the group, U.S. Sen. Dick Durbin, who is a member of the Senate Committee on Agriculture, Nutrition and Forestry, issued a statement: “The bipartisan infrastructure law will be a boon for our Illinois farmers who rely on our rail, rivers, and roads to move their goods to market. Now, as the Senate begins to consider the upcoming farm bill, I want to ensure — once again — that the needs of our Illinois farmers are met.”

“I thought Senator Duckworth’s offer to lead a letter on that subject was really something that we were looking for,” Nielsen said. “There are billions of dollars that were approved in the bipartisan infrastructure law and Illinois is getting a substantial sum of money, and it’s our belief that there are needs out in rural Illinois that need to be addressed. Please don’t spend all the money in Chicago and the suburbs.”

The group also expressed their concern over skyrocketing input costs, most notably for anhydrous ammonia, and the federal EPA’s proposed Waters of the U.S. rule. (Illinois Farm Bureau news service)

The petitioners believe that policies written to exclude any technologies other than electric vehicles, which is a stated goal of the Biden administration, will “stifle any chance for sustainable change in the future,” according to an ICGA news release. ICGA President Martin Marr, a farmer from New Berlin, noted: “If the policy goal is to address the challenges of climate change, we need regulations that recognize and encourage all low carbon technologies able to contribute to the goal. If EPA’s goal is to unilaterally phase out liquid fuels, it must seek congressional authorization to do so. Absent that, EPA must recognize all pathways to reduce GHG emissions from the transportation sector — including liquid fuels.”

In addition, the corn growers lauded the bipartisan FY22 Omnibus Appropriations bill, approved by the House March 9, that funds certain lock and dam and inland waterway projects. Included is $45 million to be appropriated for modernization of locks and dams on the upper Mississippi and Illinois rivers.

“This level of funding positions LaGrange Lock and Dam at Versailles, Illinois to move into construction in FY2024,” said Jim Tarmann, ICGA managing director. “Illinois Corn thanks Senators Durbin and Duckworth and Congresswoman Cheri Bustos for their Community Project Funding request that will see LaGrange Lock and Dam receive the upgrades it has needed for decades.”

URBANA — In a recent article published by the University of Illinois, U of I natural resources and environmental sciences researcher Lowell Gentry was asked why Illinois farmers can’t seem to get the nutrient runoff issue under control. Gentry acknowledged that the answer was complicated and hinted that researchers should begin looking at previously underexplored ways farmers can reduce chemical losses from crop fields — most notably through soybean production.

“Many people think that nutrient losses from farm fields are simply a matter of excessive fertilizer application and that farmers just need to use less. In one of our tile-drainage studies, we used only 75 percent of the full nitrogen fertilizer rate on corn. This reduced grain yield by 10 percent but had little effect on tile nitrate losses over the course of the study,” said Gentry.

“There is no doubt, however, that the timing and method of nutrient application can have a great effect on nutrient losses in the tile-drained regions of the state. For example, our studies show that much more nitrate is lost to the tiles when nitrogen fertilizer is applied in the fall rather than in the spring, just ahead of corn planting.

“Soybean production also aggravates nitrate losses to tile-drainage systems. We believe this nitrate forms as a result of microbial decomposition of crop residues and soil organic matter when the soil microbial community runs out of easily accessible carbon. The nitrate that forms during the nongrowing season is susceptible to leaching losses. This is a leak in the system that is not being addressed.” (U of I News Bureau)

SPRINGFIELD — Weeks ago this column advised readers that Dr. Mark Ernst, Illinois state veterinarian, was asking poultry owners and processors to be on the lookout for highly pathogenic Eruasian H5 Avian Influenza (Avian flu) in their flocks. It was thought that the virus might enter the state through wild birds via the Canadian flyway — and it appears that projection was spot on. On March 10, the Illinois Department of Agriculture, in conjunction with the Illinois Department of Natural Resources, received notice from USDA Wildlife Services of the first confirmed highly pathogenic Eurasian H5 Avian Influenza in a wild bird in Illinois for 2022.

According to an IDOA news release, three Canada geese located in Will County were submitted for sampling on March 2. The findings were confirmed by the USDA Animal and Plant Health Inspection Services at the National Veterinary Services Laboratory.

Anyone that owns birds or is involved with poultry production, whether on a small or commercial level, should be aware of Avian flu symptoms and take precautions to protect their flock. (Illinois Department of Agriculture)