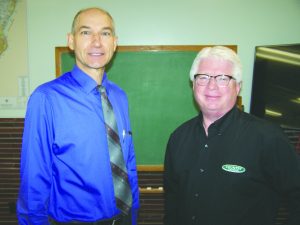 Farmers: the USDA is “freaking out,” in the words of one crop agency manager, over the small number of U.S. farmers who have made their crop insurance decisions for 2020. Why the rush?

Also this week: producer sentiment over the prospects of improved trade with China sent the Ag Barometer soaring in January; can the momentum maintain itself? We also have news of USDA investment in Illinois to help farmers improve water quality, just as the climate conversation is heating up again. For more, please read on …

PEORIA — Country Financial crop agency manager Doug Yoder made no bones about it: The USDA Farm Service Agency is “freaking out” due to the fact that only a few thousand Illinois farmers had, to date (Jan. 28), indicated their crop insurance decisions for 2020. The holdup? Many farmers, rightfully, are holding out until Feb. 20 when the USDA issues key 2019 crop acreage reports that could influence their final decisions. The final day to make crop insurance decisions is March 15, but FSA offices have been hammered with backlogs of work while distributing a third tranche of Market Facilitation Program payments.

Resultantly, FSA is stressing to farmers the importance of reporting their crop insurance declarations as soon as possible, Yoder told farmers gathered at the Peoria County Farm Bureau for a farm bill chat.

“(FSA agents) still have CRP sign ups through the end of February and (MFP payments), so they have a lot on their plate,” said Yoder, adding that farmers who don’t make a decision by March 15 forfeit any possible payment they might have received from the ARC or PLC programs.

Illinois FSA State Executive Director Bill Graff said last week that FSA would have to sign up 4,000 farms a day to enroll all farms before the March 15 deadline. “So far only 33,000 farmers have signed up, and 161,000 normally participate. We are roughly 20 percent done and have six weeks left,” Graff told Illinois Farm Bureau’s RFD Radio.

Third round of MFP payments issued

PEORIA — Indeed, state FSA offices were instructed by USDA to “make every effort” to issue the third tranche of MFP payments to individual farmers by Feb. 7. According to Peoria County Farm Bureau President Patrick Kirchhofer, most farmers receive their MFP payments through direct deposit into their bank accounts from state FSA offices.

The payments, which are aimed at assisting farmers suffering from damage due to trade retaliations, are expected to average from $15 to $150 per acre. Corn and soybeans are among the crops eligible for payments. This is expected to be the final round of MFP payments issued by the USDA.

WEST LAFAYETTE, Ind. — The always volatile Ag Economy Barometer, issued monthly by Purdue University, posted a noticeable uptick in January based on the phase one trade agreement between the U.S. and China — and this was before USDA issued a third round of MFP payments. The barometer jumped 17 points, to 167, over December 2019’s reading of 150. The Index of Current Conditions, at 142, rose by only a point from December. However, the Index of Future Expectations climbed 24 points to 179. It will be interesting to see how the Chinese coronavirus, which has affected the Chinese economy, the prospect of a larger than anticipated South American soybean crop and another stagnant month for the markets affects the next barometer reading.

WASHINGTON, D.C. — Illinois will be splitting $17.5 million with 12 other states to help farmers improve water quality in Mississippi River basin watersheds, under two USDA Natural Resources Conservation Service programs. The paltry amount dedicated to water quality research, promotion and implementation should come as no surprise to those who have watched the current administration gut USDA funding and slash payroll year after year. For 2020, President Trump recommends cutting the discretionary USDA budget by 15 more percentage points, to $20.8 billion from $24.4 billion in 2019. Specifically identified for further funding cuts by the president are farm conservation programs, along with crop insurance and nutrition programs.

Producers may enroll for their share of the funds through NRCS’ Mississippi River Basin Healthy Wetlands Initiative or National Water Quality Initiative programs, according to a Feb. 7 USDA news release.

CHICAGO — Around 50 stakeholders attended a recent Illinois Soybean Association checkoff program centered on climate variability; specifically, what industries and agriculture can do to anticipate and adjust to it. Past Illinois State Climatologist Jim Angel told attendees that surface temperatures in Illinois and the Midwest will likely increase by five to nine degrees Fahrenheit by the end of this century, with more frequent and heavier rain events.

Reducing carbon dioxide emissions was a topic of discussion at the ISA’s “Insights Summit” held in their Chicago office. “Each industry has the opportunity to decrease its carbon footprint, but agriculture has the unique opportunity to take some away. Carbon dioxide can be put back into the soil through organic matter,” said Angel.

Angel and others who spoke at the summit described methods of conservancy — including cover crops — that could put money in producers’ pockets, via programs such as the Ecosystem Services Market Consortium. According to The Nature Conservancy, cover crops can sequester around 0.13 tons of carbon per acre. At a payment of $10 per ton, that’s $160 million back in farmer’s pockets across 122 million acres of Corn Belt crop land, noted TNC’s Pipa Elias.

“We need to give growers access to knowledge and resources to successfully adopt conservation practices while also benefiting from the market,” Elias said. “The only way this system works is if growers make money.” (ISA news)