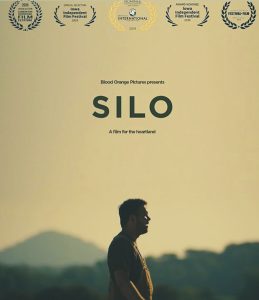 This is Grain Bin Safety Week in the United States, and the new movie “Silo” takes safety awareness to a personal level for some Illinois families. We have information on an upcoming special screening of the movie that everyone was talking about at the 2019 Farm Progress Show. Also this week, we have news from last week’s Illinois Pork Expo, and details of an important upcoming USDA farmer survey. For more, please read on …

SPRINGFIELD — The Illinois Department of Agriculture, USDA and county farm bureaus are all stopping to reflect and prepare during Grain Bin Safety Week, Feb. 16-22. With 2019 crop conditions drawing comparisons with past years’ wet-stored crops (such as 2009, leading to 26 deaths in 2010), grain bin safety is especially important this year, according to Illinois Farm Bureau President Rich Guebert Jr.

“Even one accident, is one too many,” said Guebert, in an IDOA news release. “We want to remind farmers to never enter a grain bin or grain storage facility alone. Our target is zero entry, but unfortunately, with last year’s harvest challenges, a lot of wet grain was put into storage, leading to more grain bin entries. If entry is unavoidable, please have an observer stationed outside to get help immediately if needed.”

Grain Bin Safety Week is personal to Kristi Noem, the governor of South Dakota, who lost her father to an engulfment. “My life changed forever when we lost my dad in a grain bin accident, and while farmers are often in a hurry to get things done, nothing is worth losing a life. This Grain Bin Safety Week, I want to encourage producers to evaluate safety procedures on their farms and ranches. Slow down and be safe — your family will thank you for it,” Noem stated in a USDA Office of Communications release.

Thanks to major community support, the movie “Silo,” which is based on a tragic Illinois engulfment that claimed the life of a teenager and his small, tight-knit community’s response to the event, will be screened at the Bureau Valley (Princeton) High School Auditorium. The screening is scheduled for 5 p.m. Feb. 24 and will be followed with a farmer demonstration by Stateline Farm Rescue at a nearby location.

Another screening was held Feb. 16 in Freeport. Farm bureaus or others interested in hosting a screening of “Silo” can apply online at www.silothefilm.com. Grain bin safety training resources are available through the websites of the Grain and Feed Association of Illinois, Grain Handling and Safety Council and University of Illinois Extension.

SPRINGFIELD — Though their name may seem more suited for beef production, the Cowser family of Bradford (northwest Peoria County) was recognized as the Illinois Pork Producers Association Family of the Year at the recent Illinois Pork Expo. The fourth-generation producers, who wean an average of 1,100 pigs per week, were honored for contributing to the long term success of the pork industry through their leadership and promotion on state and national levels. The award was presented by retiring Illinois State Senator Chuck Weaver and Representative Dan Swanson.

SPRINGFIELD — It’s that time of year: the USDA National Agricultural Statistics Service will soon be asking farmers what crops they intend to plant in 2020. Illinois State Statistician Mark Schleusener explained why: “Each year, the agriculture industry eagerly awaits USDA’s Prospective Plantings report, which provides the first survey-based estimates of U.S. farmers’ planting intentions for the year. The March Agricultural Survey provides the factual data that underpins these projections, making it one of the most important surveys we conduct each year.”

NASS will begin mailing the survey questionnaires in February. In addition to crop planting intentions, data will be gathered about how many acres farmers intend to plant, and the amount of grains and oilseeds stored on-farm. Survey results will be published in the March 31 NASS Prospective Plantings and Quarterly Stocks report. (USDA-NASS Illinois news)

URBANA — Southern Illinois farmers and rural dwellers in Alexander County in southern Illinois have been up in arms on social media about the lack of response from state and federal authorities concerning repeated failures of the Len Small levee, located near the confluence of the Mississippi and Ohio rivers. Resultantly, farmland, homes and businesses have been severely damaged, with some residents left stranded and agricultural land irreversibly degraded.

The latest levee failure occurred in 2016, following floods in 2011 and 1993. No repairs have been made to the levee since the 2016 breach, causing residents, land owners, county officials and local elected leaders to clamor for a solution from the U.S. Army Corps of Engineers. A new University of Illinois study, however, confirmed what most already know: the levee will continue to fail even if repaired.

“Because the levee is built on unconsolidated ancient Ohio River valley alluvial sediments, which are easily eroded by the Mississippi River, any patch or repair will only be a short-term solution,” said Kenneth Olson, professor emeritus in the U of I Department of Environmental Sciences. “The levee is very likely to fail again during a future major flooding event.”

If a solution is not found and acted on to correct the 2016 levee breach, agricultural lands and roads on the Dogtooth Bend peninsula will continue to degrade, according to study co-author David Speidel, a retired USDA resource conservationist. (U of I ACES news)

The cost to repair the Dogtooth Bend levee in Alexander County is estimated at $16 million. (University of Illinois)