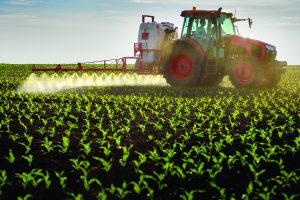 The Illinois Fertilizer and Chemical Association has signed a letter of support along with other ag groups pertaining to HR 7266 (Pesticide Preemption). The bill would ensure only states serve as the co-regulators of pesticides along with the U.S. Environmental Protection Agency, rather than localities.

Across the state the talk around the kitchen table is of late planting. We have a planting update, along with a look at the Prevented Planting program as the deadline rapidly approaches in many areas. For more on these topics and other news from between the rows, please read on …

BLOOMINGTON — Before Kevin “KJ” Johnson became a congressional aide and later, executive director of the Illinois Fertilizer and Chemical Association, he was a young farmer growing up in Champaign and Vermilion counties. Johnson, still a full-time farmer, is among the Corn Belt producers who are growing a little concerned about planting dates for crops being pushed to the point of diminishing returns due to the prolonged wet and cold conditions in central Illinois.

“It’s wet-wet over in my part of the world,” Johnson said during a phone call last week. With planting progress at just 7 percent completed for corn (compared to the five-year average of 43 percent) and 5 percent for soybeans (compared with an expected 19 percent) as of May 2 in Illinois, he worries that crop yields — and profits — will trend down due to late planting. The IFCA leader was encouraged, however, by a brief window of opportunity that allowed fieldwork to be completed during the last week of April.

“From Champaign to Bloomington and up to Chenoa and Waukegan, I saw bean planters running a lot more than corn. I’m in that same boat. I’m worried we’ll get more rain and I’ll have to replant my corn,” Johnson said. “I did get a chance to plant some no-till beans that I feel may withstand rain better, on well-draining soil. Around here, there are definitely more beans going into the ground than corn. And there are a whole lot of farmers that were out just putting on anhydrous looking forward to better weather next week.”

As per usual in Illinois, the poor weather conditions affecting many areas is offset by areas that are still relatively dry, Johnson continued. “From Jacksonville over to Quincy, those may be the only farmers that are ahead of the game at this point. There are pockets that have been drier than others, and I have a buddy in Hancock County that is done planting entirely,” he said.

With temperatures forecasted in the mid-80s on Monday, May 16 and the low 90s by Wednesday, May 18 — and little to no rain expected across the central Illinois region — Johnson expects to see a lot of planting progress, including his own, accomplished this week.

BLOOMINGTON — In other news from the Illinois Fertilizer and Chemical Association has signed a letter of support along with other ag groups pertaining to HR 7266 (Pesticide Preemption). The bill, introduced in March by Illinois Rep. Rodney Davis, R-Taylorville, states that “A political subdivision of a State shall not impose, or continue in effect, any requirement relating to the sale, distribution, labeling, application, or use of any pesticide or device subject to regulation by a State.” In layman’s terms, it would ensure only states serve as the co-regulators of pesticides along with the U.S. Environmental Protection Agency, rather than localities.

“If passed, the bill reinforces the intention of FIFRA (Federal Insecticide, Fungicide, and Rodenticide Act) that only the state lead agency act as a coregulator in the state with USEPA, ensuring that the highly technical work of determining how pest control products and services are utilized are made by those agencies with technical knowledge. In states with preemption, the state lead agency already works with the EPA on any and all pesticide usage, sale, or distribution. The handful of states without a pesticide preemption law allow individual localities to regulate pesticides differently, creating unequal protection for citizens based on their ZIP code,” according to the IFCA. “As many of our members already know, Illinois is one of the states that does have pesticide preemption under the Illinois Pesticide Act.” (IFCA news)

U of I: Time to consider Prevented Planting option?

URBANA — With wet fields delaying planting across much of Illinois and the Corn Belt, should farmers be eyeing the USDA-Risk Management Agency’s Prevented Planting option if planting can’t be completed by certain key dates? Furthermore, is the Prevented Planting insurance option good public policy? These considerations were addressed in a recent farmdocDAILY report ,”Prevent Plant and 2022 Acres: A Looming Issue” (Zulauf, C., G. Schnitkey, K. Swanson and N. Paulson.)

“Given the tight supply-demand situation for grains and oilseeds in 2022 and with prevent plant dates approaching and, in particular, occurring in late May in the northern US; the time is now to discuss this question,” according to the authors. “Analysis finds significant economic incentive to take prevent plant if weather delays planting beyond the initial prevent plant date, especially for soybeans.”

The decision farmers will have to consider will be final: expected production is not zero on the prevent plant date, but prevent plant makes it zero. Is this ethical?

BLOOMINGTON — The nationwide trucking shortage is affecting agriculture, and the Illinois Farm Bureau is taking action. Last week, IFB leaders issued the first round of grants to help Illinois residents to defray the cost of over-the-road truck driving accreditation and CDL applications. The charitable arm of the IFB, the Illinois Agricultural Association, sent checks to five applicants to their Driving Agriculture Forward Scholarship program. The payments came from a budget of $20,000 set aside to fund the program through 2022.

According to IAA Foundation development director Jennifer Smith, Scholarship applications are available year-round with consideration deadlines occurring quarterly. The next application deadline is June 30, which correlates to drivers who intend to enroll in a commercial driver training program at an Illinois community college between July 1 and Sept. 30. Five $1,000 scholarships are awarded every three months based on the IFB region where the applicant resides. (IFB news)

Eligibility guidelines and applications for the Illinois Farm Bureau’s Driving Agriculture Forward program are available through the IAA Foundation website at www.iaafoundation.org.